You won’t find any swastikas in Call of Duty: WW2 multiplayer, but you’ll be able to play as a person of colour in the Axis faction. 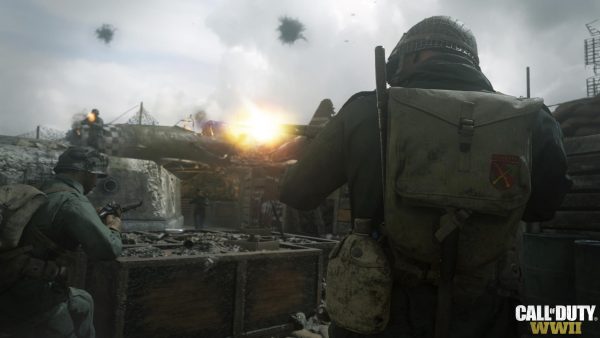 Call of Duty: WW2 was no doubt one of the biggest games at E3 2017. After developer Sledgehammer revealed the first multiplayer footage, plenty of questions started popping up about a few aspects that have little to do with gameplay.

The two most common talking points pointed to the bizarre lack of swastikas, and the fact people of colour were seen playing as the Axis faction. This is a first for the Call of Duty series, and so the studio needed to explain its approach.

“It may be one of the topics we wrestle with the most,” Condrey told Eurogamer about the lack of Nazi iconography in multiplayer.

“In campaign, we need to balance the authenticity with the respect for the fact 100 million people died in the darkest days of humanity. So, you will see the swastika in the campaign, using our military historian to make sure it’s authentic, tasteful and respectful.

“But in our global community of multiplayer and zombies players, we’ve chosen deliberately not to include that. We want the community to play together. We want to be respectful of local customs and laws around the world. And frankly it’s a dark symbol with a lot of emotion behind it we don’t feel matches our multiplayer experience.”

Condrey explained how having a different approach to each of the game’s components is important, which also extends to taking liberties with certain aspects. For instance, you get to create your own soldier which will be the same regardless of which team you’re playing as.

“Multiplayer is about bringing a community together that enjoys playing Call of Duty. It’s faster. There’s a brutality to WW2 multiplayer that is different than the last few games we made, but we were able to take some creative liberties to make that an experience multiplayer fans really love,” added Condrey.

“Now, the challenge there, which is real, is half the time you’ll be playing on the Axis team. That was a decision we made intentionally. We want it to be you and we’re willing to have you be you, no matter what side of the conflict you’re on,” Condrey explained.

“I’ll come right through the front door on it: we know that didn’t happen in the German forces. We know there was a lot of racism and racial tension in the 40s, so you wouldn’t have a black German soldier fighting next to the other Germans.

“We want this to be about you. We’re not making a statement about the authenticity of the Axis force. We’re making this about putting you in this social space and you into your soldier. And we want that to be rewarding and meaningful. I don’t want it to be our decision to force you away from your character into playing a German soldier, just because we put you on the Axis team.”