The Game Awards 2016 kicks off tonight, and continuing the tradition, we’ll be covering everything that comes out of it.

The Game Awards 2016 takes place kicks off at 6pm PT/9pm ET/2am UK. It will be broadcast live via PSN, Steam, Twitch, Twitter, YouTube, Xbox Live and other services. We’ve embedded the YouTube steam above.

Along with the awards, gameplay debuts from Mass Effect Andromeda and Prey are expected, along with the usual surprises. Maybe even a Duke Nukem reveal, and 343 Industries has promised a special Halo Wars 2 surprise.

The Legend of Zelda: Breath of the Wild will make an appearance, and will likely be introduced by Nintendo of America president Reggie Fils-Aime as he has been confirmed to take the stage at some point.

Awards will also be handed out, of course. Hideo Kojima will be at the show to accept the Industry Icon Award, and we may possibly get another look at Death Stranding. We expect the bulk of information on his game to be revealed this Saturday during Sony’s PlayStation Experience 2016. He will also be hosting a panel, so expect more on that end this weekend.

Game of the Year contenders this year are: Doom, Inside, Overwatch, Titanfall 2 and Uncharted 4: A Thief’s End.

The game’s Blood and Wine expansion is up for Best RPG this year. 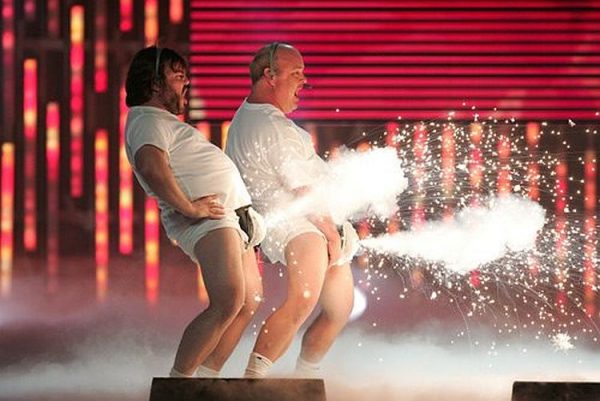 VG247 has been covering the annual game awards since 2009, when it was known as the Video Game Awards and hosted by Spike TV. It was filled with many cringe worthy moments, honestly, and one of the most memorable for me was in 2009 when Mike Tyson took the stage with the cast of Jersey Shore – which debuted that very month. He at one point turned to them and said: “Who are you again?” Or something like that.

Then there was 2008 when Tenacious D, Jack Black and Kyle Gass, showed up in underwear, shooting sparks from their groin (image credit). Good times.

Back in 2013, Spike renamed the VGAs opting for VGX instead. We, meaning me, were rather pleased with the name change due to the dyslexia factor which resulted in many a humorous tweet calling it the “VAG” awards.

Then again, to tolerate all the nonsense in between announcements, and the commercial breaks every two minutes, I had to be half-snookered just to get through the liveblog so that may have contributed. Thank goodness we don’t liveblog the show anymore. But, it’s also the end of an era of sorts for me, because this year, Brenna is handling things, so I won’t be joining you for all the revelry. You’re welcome.

Moving on, after Spike dumped the show, Geoff Keighley started his own with industry backers in 2014, dubbing it The Game Awards. The inaugural event debuted in December of that year, with Dragon Age: Inquisition taking home Game of the Year.

Anyway, as usual, expect all the important announcements, videos and award winners to be posted on the site. You can also expect a round up post full of links after all is said and done, because things tend to get lost on the front page for this sort thing.