Bart, Homer and the rest of the Simpsons clan are coming to Minecraft via new a content pack announced today.

Scheduled for release in late February, the downloadable pack will include the entire family plus 19 of Springfield Elementary characters. This means Ralph “It tastes like burning” Wiggum. Hooray!

The content pack will run you $1.99 and will be released for Minecraft Xbox 360 and Xbox One editions. 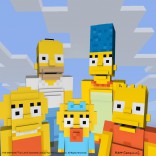