Pac-Man and Katamari? That’s actually amazing, why hasn’t anyone thought of it before?

One is a round object that gobbles up everything in sight, and the other is the exact same thing but with ghosts. Mind blown.

Andriasang reports a Pac-Man themed DLC pack is coming to the Japanese version of Touch My Katamari; as all other packs have made it to the US PlayStation Stores so far, it’s fairly safe to bet we’ll eventually see this one too.

The Pac-Man stage was not dated, but another DLC level featuring Sony Japan mascots Kuro and Toro is coming in April.

On a related note, we’ve sent a heated note to Namco Bandai Australia demanding to know when the game’s existing DLC will reach the local store; the publisher didn’t have any PAL specific dates to share but said the content is definitely on the way. 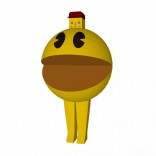