City building games aren't exactly a genre one tends to associate with a particular mood. Aside from the jaunty, upbeat music of the all-time classic SimCity 2000, they tend to be relatively disconnected, dispassionate experiences. Cities Skylines is a bloody incredible game, but it isn't exactly awash with atmosphere. Then there's Tropico. Tropico is the city building and management game for the player who wants a bit of flavour.

The concept is pretty simple, really: take the honest city simulation and management gaming tropes and cram them into a setting that's awash with potential for satire and fun. The result is a simulator bursting with energy: instead of a gentle orchestral backing to the hustle and bustle of a city, the game blasts Cuban Big Bang, Salsa and Latin Jazz at you. Instead of being a faceless Mayor your player character El Presidente is designed before you hop in and can be sent around your city on foot to boost morale.

This all works well and has pretty much always done so, which is why Tropico is now on its sixth entry. Truth be told, this is a series that generally likes to play it pretty safe with minimal changes from game to game, but this sixth entry seems to have a new energy about it that hasn't been present for the past couple of games. That may well be because it's changed developer, moving over to Limbic Entertainment.

The core of Tropico 6 is in the balancing act of maintaining power as an island dictator. There's capitalists, communists, the religious and the Axis and Allied states from abroad among others - and ultimately, everybody must be at least a little satisfied for your reign to continue. Where in most games of this kind the fail state is simply if you get into too much debt to continue, Tropcio is actually about survival: piss off too many people and you'll end up suffering an election defeat, or if you disallow elections, a bloody coup or even foreign invasion. 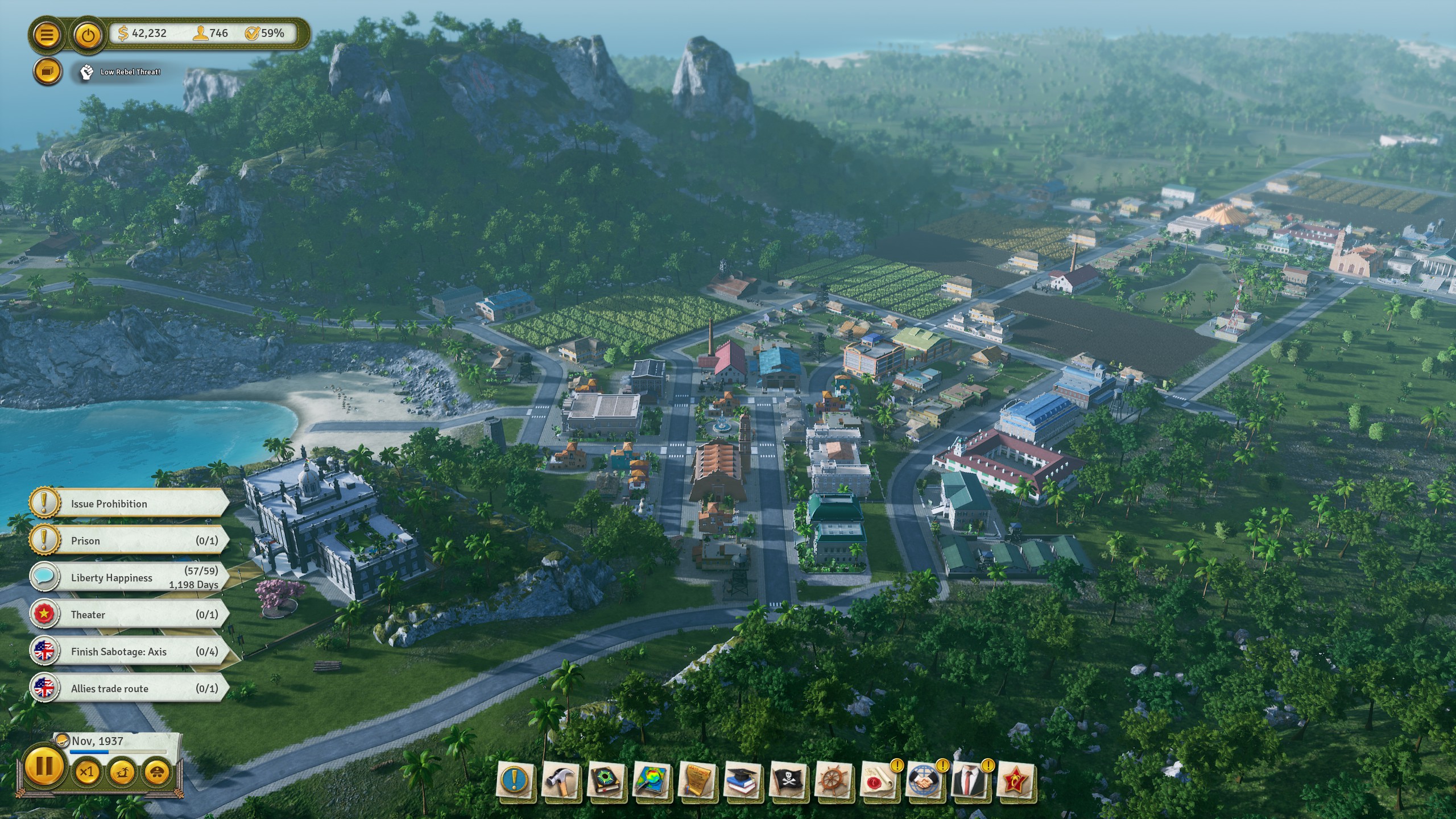 Tropico 6 doubles down on this part of the game in particular, expanding out the faction system so you're constantly juggling the needs of the eight different groups you must satisfy. Some won't be present at the onset, but eventually every single one will be vying for your attention at once, throwing up missions and demands you'll need to carefully consider, as those you don't tackle could come back to haunt you.

Given that you're a dictator, you don't necessarily have to play nice with the factions either. You could bribe their leaders with cash from your Swiss Bank Account (which itself is siphoned off from state funds for a rainy day at your discretion), or you could work simply clamp down on and imprison those who defy you. If you didn't want to be so obvious, elections can be rigged or accidents can be arranged to off those causing you problems. A significant flaw in Tropico 6 (and the series in general) is that the game feels infinitely easier if you do play nice, working hard to keep everybody a little bit happy. Being a Bond villain-esque evil dictator is more fun and in keeping with the overwrought tone of the game, but it's actually not as sustainable in practice.

The other and arguably more significant major addition is islands. One sticking point for many city builders is the late-game struggle for space, but Tropcio 6 remedies this by having most maps offer the player a range of islands. Each might have slightly different resources to exploit, and it'll cost you significant resources to place the infrastructure to initially inhabit an extra island. Once you do, you're scrolling back and forth across the large maps between islands to manage things and further expand. It becomes a compelling extra wrinkle to the management aspect.

The addition of islands is perfect for Tropico because it's a series so focused on smaller-scale simulation. You're dealing with thousands of citizens, not tens or hundreds of thousands, so every individual citizen can be properly simulated. You can zoom down to town level and follow one guy as he travels from home to work as a fisherman, then to the tavern for some after-work beers. This is a key part of the Tropico series; because everybody is fully simulated in this way your planning has to be all the more careful. Buildings that transfer resources between each other (such as a plantation farming tobacco and a factory that makes cigars to export abroad for big bucks) should be close together to maximize efficiency, and people should live close to work and have nearby entertainment for similar reasons. 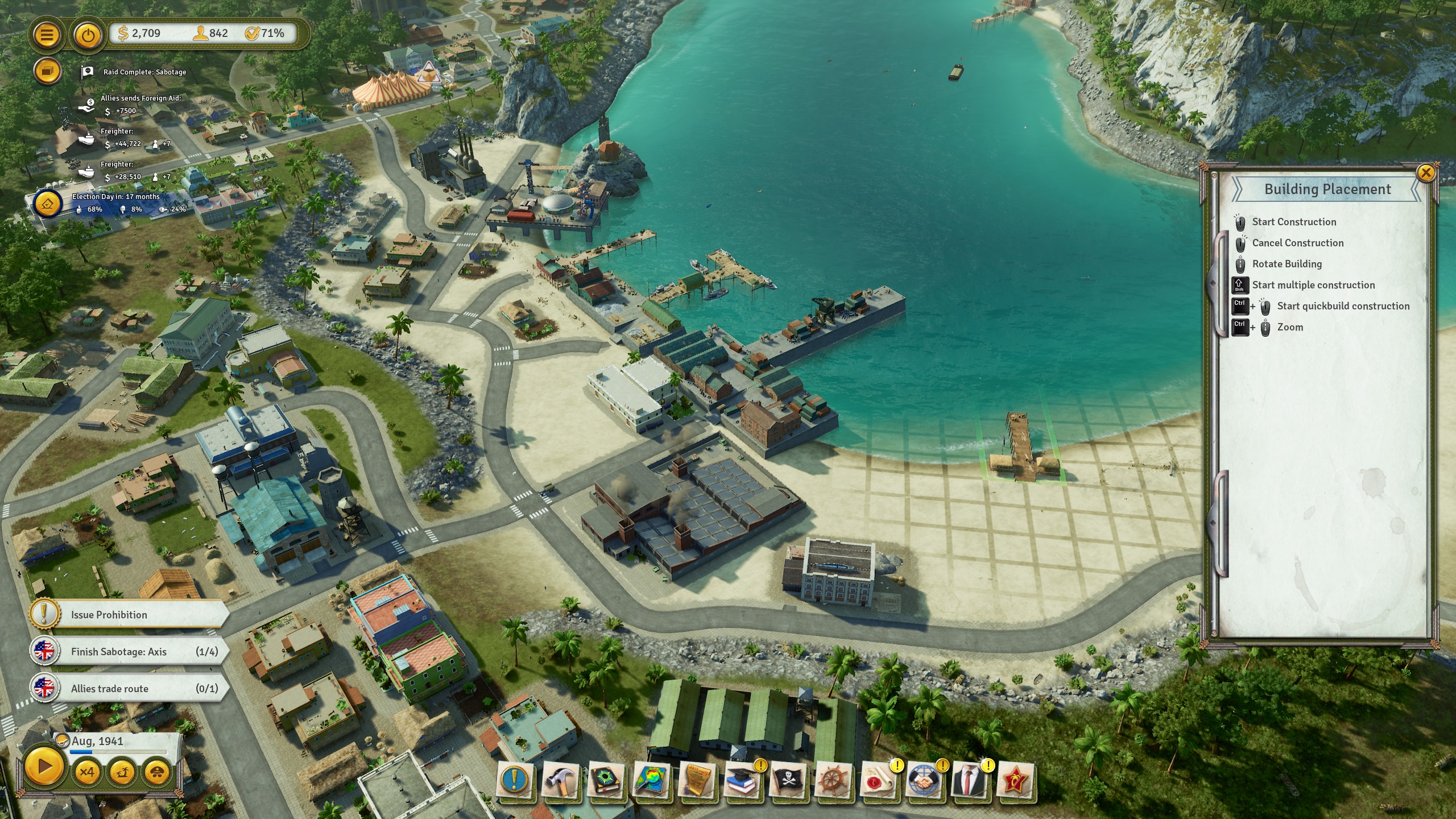 This all plays into islands, too - it's generally not good enough to just drop a mine on an island because there's a solid gold deposit you want to exploit there; you'll also want to provide accommodation, some entertainment, and in later eras even an electricity connection. Suddenly, that island is itself a little hive of Tropican activity. It also means that if things go wrong, a small problem can quickly snowball to annihilate your main means of making money and cause serious problems.

Other systems feel more significant this time around - trading is a more considered task and raids, which return after several games' absence, allow the feeling that Tropico is part of a greater world, that carrying great potential rewards and consequences alike. It's all good stuff, and the nature of the design means Tropico 6 lends itself more to objective-based levels than most of the genre. This is one city builder I actually choose campaign missions on over casual sandbox play.

All of this is then topped with that attitude and tone I mentioned at the top of this review. Tropcio 6 is as charming as ever, full of silly dialogue and over-the-top representations of certain moments and figures in history. It's not cutting, incisive satire and might come in for criticism for that from some circles, but it doesn't seem to want to be - it just wants to make you chuckle from time to time. In that it's entirely successful.

Tropico 6 isn't spectacular in terms of breaking the mould. There's no revolution here, but nor would El Presidente want one - that keeps him in power, after all. It's a confident game that plays it safe, offering simple iterations and smart tweaks to the already well-trodden and successful styling of the series to offer up an entry that, at the very least, is superior to its direct predecessor. The jury is still out if I like this as much as I loved Tropico 4 (200 hours played!), but I can certainly recommend Tropico 6 for some relaxing management sim video game comfort food with confidence.

Tropico 6 is out now for Mac and PC, which is where we reviewed it with a copy provided by the publisher. It's also coming to Xbox One and PS4 later this year.