From the outside, you wouldn’t even know it was there. In Playa Vista, Los Angeles, a massive and unassuming business lot is home to PlayStation’s suite of motion capture volumes.

It’s where some of the greatest developers in the world bring to life their interactive stories. On one, Guerrilla Games is hard at work filming scenes for the recently announced Horizon Forbidden West. Lance Reddick, the eternal badass that he is, shows up for a day of filming. I try to stay calm.

But Lance Reddick is not why I’m here. I’m here because Naughty Dog is hard at work on the final week of motion capture filming for The Last of Us Part 2. Against my own stupid brain’s ability to comprehend how, I’ve persuaded the development team to let me come along for the ride.

So far, it’s surprisingly low key. I wake up at 4am, jetlagged and groggy. A few hours later, I grab an Uber across town early to dodge the traffic – I fail, because LA. The business lot itself is enormous and unassuming. Across the way from the set, Sony Santa Monica is busy working on whatever will follow God of War. I briefly consider sneaking in to try and get a glimpse.

A security guy signs me in, gives me a badge, and I’m in. A few cameramen, some animators, voice coaches and one Troy Baker (Joel) eventually show up to get their badges and grab a drink before the day starts proper. The actor is friendly, and talks effusively about what The Last of Us means to him.

Then the rest arrive: Ashley Johnson (Ellie) Shannon Woodward (who plays Ellie’s girlfriend Dina), Jeffrey Pierce (Tommy) and the game’s co-writer, Halley Gross. Finally, a Neil Druckmann. In his all-black Tesla, obviously. The number of people on set is limited compared to the 350 developers back at the studio because time spent here is expensive. The key is efficiency. 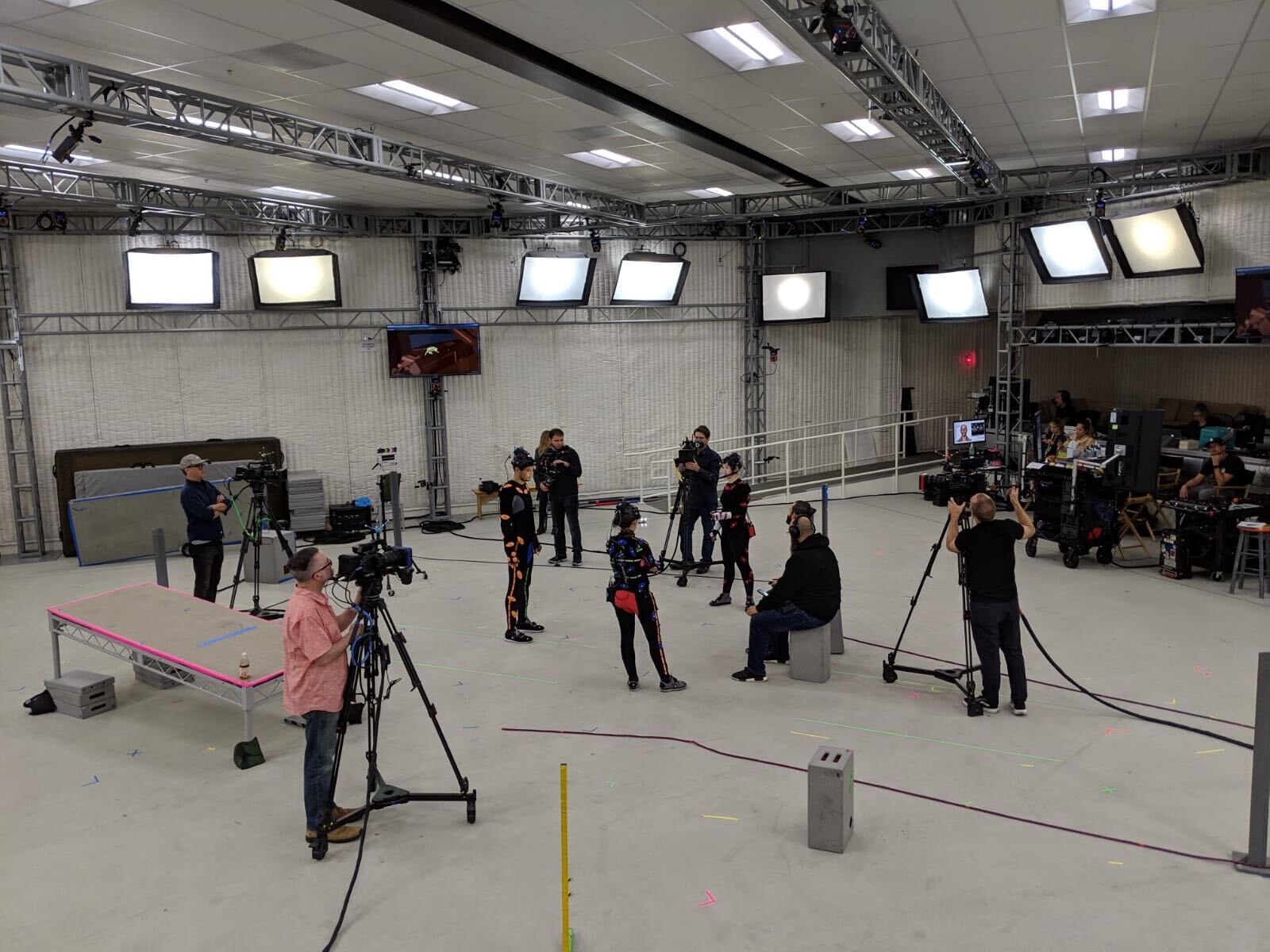 It’s April 2019, more than a year before the game will finally come out, but this is still a momentous week in the making of any game – let alone one of Part 2’s cinematic ambitions. It’s been a long road to get here; the Naughty Dog team has been using this facility to create The Last of Us Part 2 on and off for the past few years. Even since before Uncharted 4: A Thief’s End came out in 2016, the team used the stage to create the game’s 2016 announcement. You know the one where Ellie’s playing guitar and promises Joel that she’s going to find and kill "every last one of them". It’s been, by far, the team’s biggest and longest ever shoot.

The real magic happens behind two heavy sound-proofed doors; a big light identifies when the cameras are rolling. Once action is called, you can’t go in or out, lest you want the team’s wrath for interrupting any great takes. But before that, a small group – Druckmann, Gross and the cast – files into a side room to do a table read. It's where they rehearse before actual rehearsal on the main stage.

At first I’m not sure whether I should go in. It’s a private and intimate part of the process that some actors, I’m told, like being alone for. It’s a chance for them to air any grievances about their character’s lines, and just hash out any overall direction with Druckmann and Gross before they go on stage. But then Druckmann texts me: “come in.” I sidle in silently and try to assume the form of the sofa I’m sat on as to not interrupt. 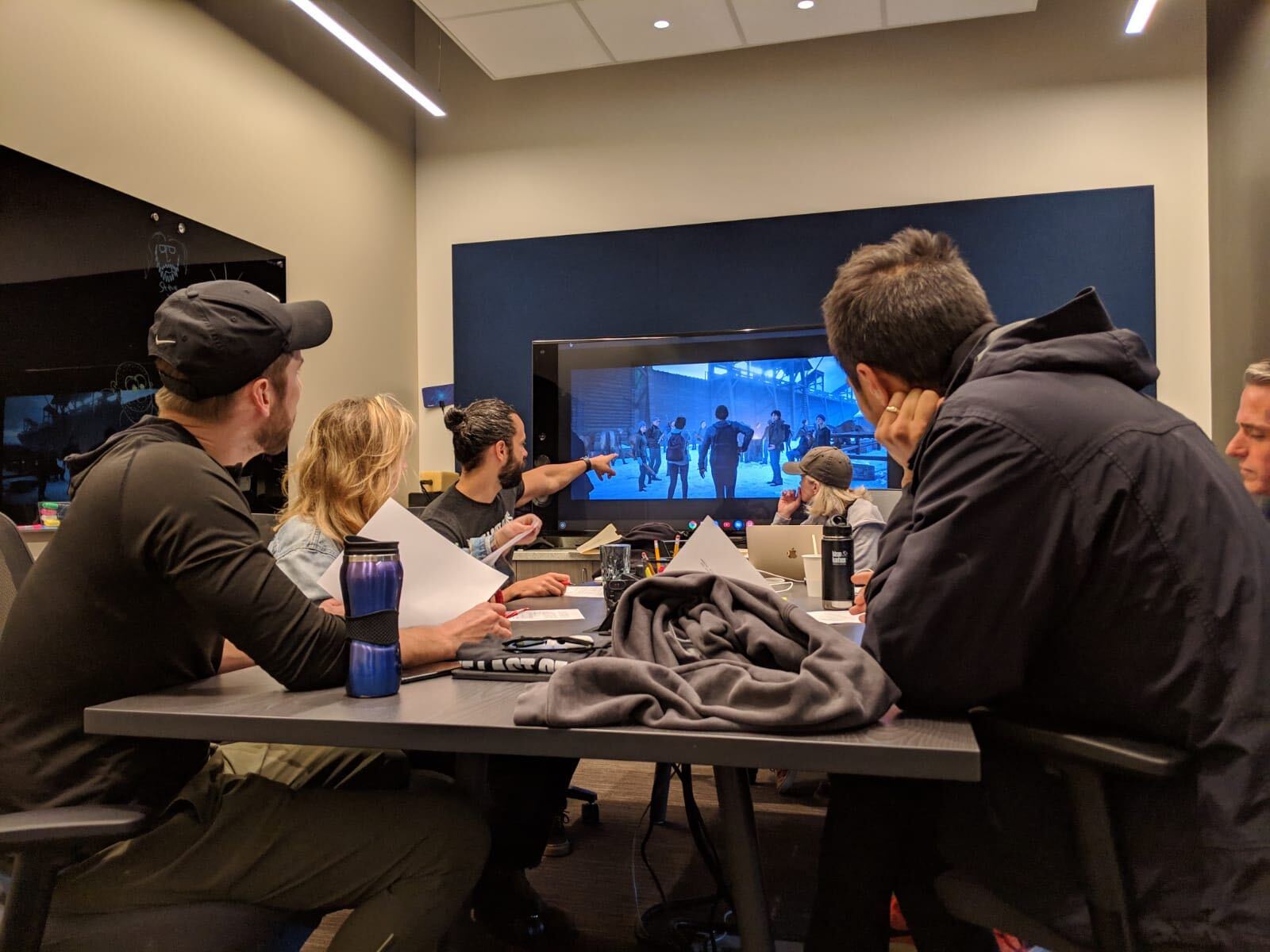 The cast read through a bunch of scenes and tweak the dialogue slightly, with Druckmann and Gross explaining the motivations and the moods of any given moment. Meanwhile, a ton of concept art is on the big screen at the head of the table to give the actors a sense of how the locations will be realised in the final game.

The main scenes this week are the game’s quiet, intimate opening sequence, in which Joel explains to Tommy about the lie he told Ellie at the end of the original game; as well as the weed den sequence in which Ellie and Dina share a beautifully romantic moment that handles teen angst better than any game I’ve seen before. There are a few others, too, but they’re more minor. The majority of lines are all spoken by the main characters, but there’s a couple of additional bits on the script too. “I have some thoughts about patrol rider 2,” jokes Baker, after a lengthy discussion about Joel’s motivations in this opening sequence. Then it’s time for proper rehearsal.

Once inside the stage, the air sort of drops out from around you. There’s no reverb whatsoever and you can hear a pin drop when the cameras switch on and everyone shuts up. Even a tummy rumble risks spoiling the acting – especially during “wild takes”, which is when the audio team wants to capture lines without any acting by having the actor sit stationary in the centre of the room with microphones up close to ensure there’s no outside audio disturbance. That’s something that catches Halley Gross and I out several times. Why didn’t I eat more breakfast? 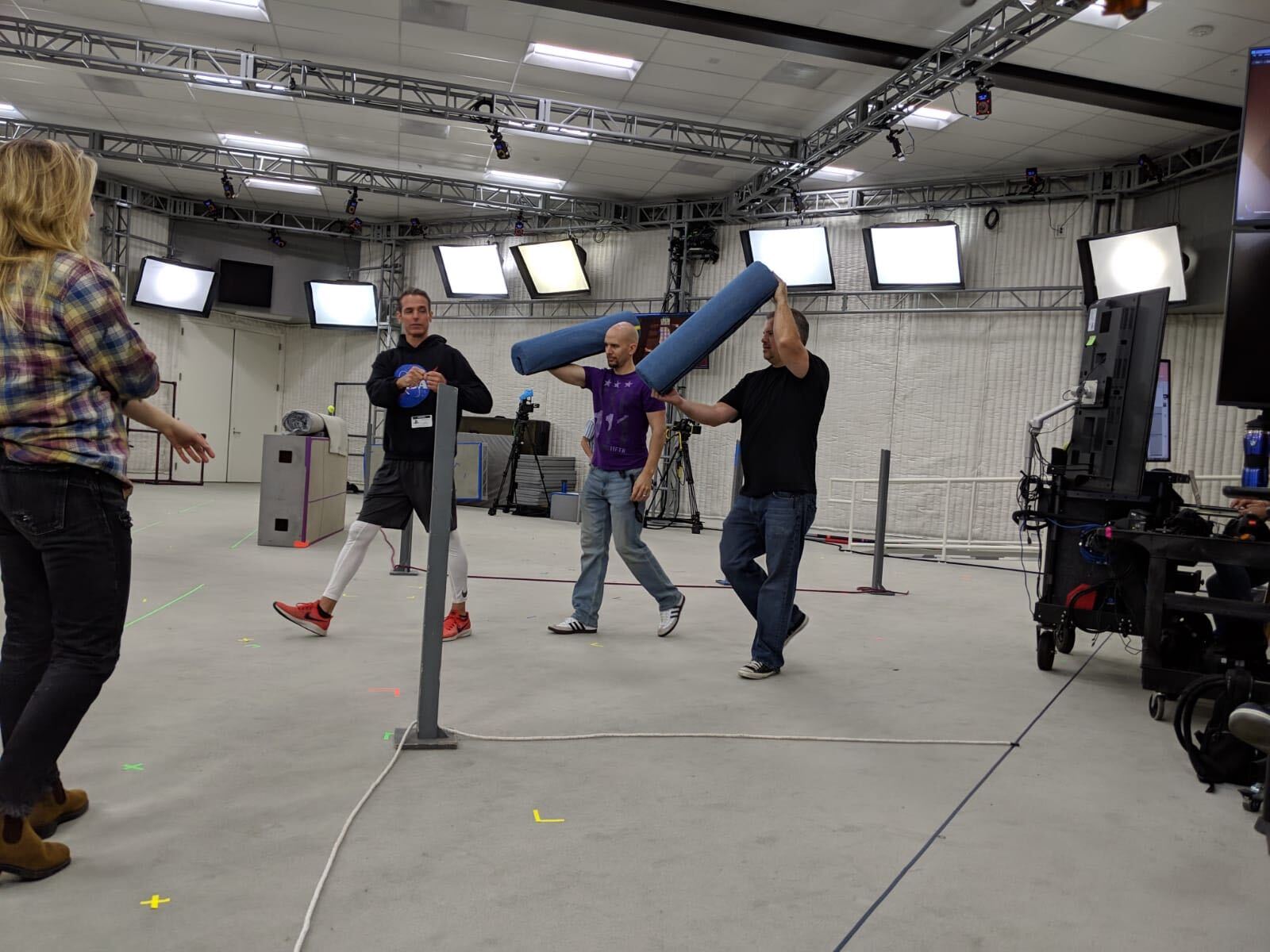 Rehearsal has the actors playing out the scenes on set, without mocap suits on. Each scene is marked out by tape on the floor, modelled in rudimentary 3D form on screens around the room so that the crew can make sure the actors are within the boundaries of the level. On some screens you can see the real-life footage, on others you can see the in-game representation of the level and characters, recorded by the motion capture suits worn by the actors.

Every time the scene changes, the tape markers change. Horses are just boxes to sit on; guns are plastic models with motion capture balls on them; gates and other landmarks – like a grave, or a dead horse – are made up of metal poles, pieces of wood and foam for the actors to do their bit with. At one point I’m pulled into a scene with a motion capture gun to act as an NPC that’ll be in the final game, as a sort of guide for where the actors need to look and walk.

The mocap suits themselves are giant spandex onesies covered in Velcro and plastic tracking dots. Woodward explains to me how you have a hard drive (“and an often excruciatingly annoying fan”) attached to your thigh powering a headcam with a very bright light that switches on whenever filming. Every morning, the cast does a login process with the computer, making sure all of the plastic balls on the suit are registering properly, essentially saving their own body’s personal settings before the performance capture sessions. Then they have some dots applied to their faces by a makeup artist – it takes about ten minutes. 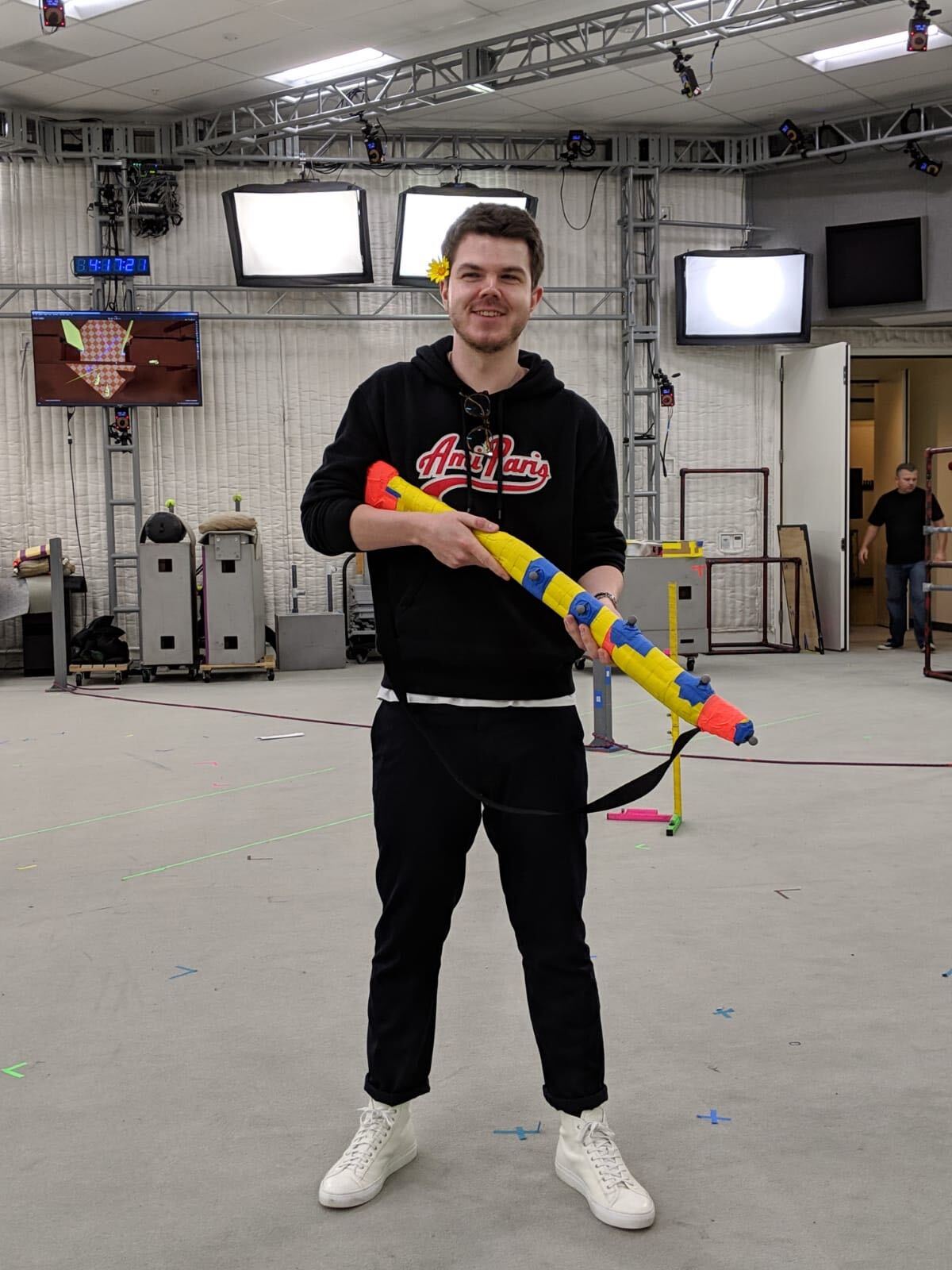 While on stage, before and after every take they assume a “T pose” which is literally what it sounds like – stood up straight, arms outstretched to the side of you. There’s also the “Z pose” which doesn’t require you to contort into a Z, it’s just named after the zombie walk. Video games are not subtle.

One thing I’m surprised by throughout the week is how relatively speedily the team works through the scenes. It’s thanks to sharp writing, strong direction from Druckmann, and the combination of a thorough table read and comprehensive rehearsal. Gross and Druckmann offer guidance to the actors, while also taking the piss out of each other profusely, and it lends to a really upbeat atmosphere throughout the course of the days.

Baker and Pierce nail their opening scene together, while Johnson and Woodward take a little longer to get their kiss perfect. It’s a scene with a lot of bodily movement and facial animation, which means the team has to utilise a bunch of different capture techniques to get it right – with and without their head-mounted cameras. This continues throughout the week as they get everything finalised – the emotions mount as the final day approaches. 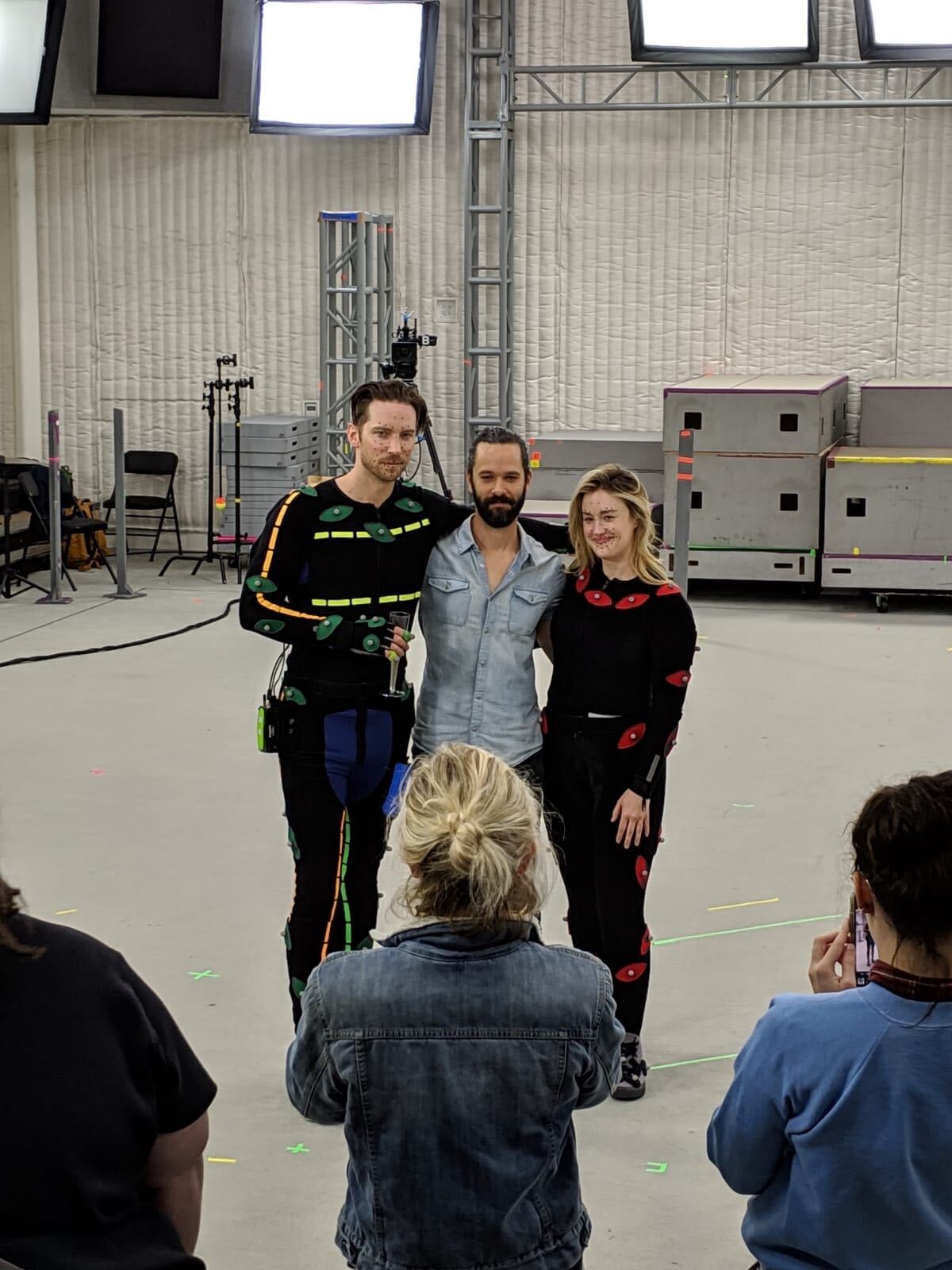 When it does, there are tears and toasts. Johnson, Baker and Druckmann all take a photo together to mark another completed game together, before Druckmann gives a speech to thank the cast and crew. "We've now been on this journey for almost ten years,” he says. “I hope you're as proud of what you brought to this project as we are of you. You're amazing.”

It’s been a long time coming, but the actors are pretty much done. It’s now time for the developers at Naughty Dog to head back to the studio and finish the game. There’s still an unbelievable amount of work to do. The cast themselves will still do a fair bit of additional dialogue between now and release – bits of in-game chatter to fill out levels, recorded in the privacy of the studio’s dialogue booths – but for now, it’s time for a drink.

Read more: Lev, The Last of Us Part 2, and imperfectly important representation.

The Last of Us Part 2 ending and story discussion.