Do you remember in The Terminator where John Connor kills a T-800 with a knife? Me neither.

Terminator Resistance is based on the first Terminator movie and its sequel, T2: Judgment Day. In theory that sounds perfect. Unfortunately, it doesn't concentrate on what made those movies great; the relentless pursuit of a laser-focused killing machine destroying everything in its path. The helpless terror and overwhelming reality of inevitable nuclear annihilation.

Instead, the majority of the game expands on the few minutes of movie backstory given over to the future wars against Skynet. The Resistance of the title, barely surviving under the genocide of the machines. It's actually closer to Terminator Salvation, the movie no one remembers - an effort to turn a one second shot of a robotic boot stamping on a human skull into a game.

That could work, were Terminator Resistance not so half-heartedly put together. This is a game out of time, where a barren world with functional systems stumble forward under the covering fire of a much-loved license. It begins as hardly a Terminator game at all, and when the iconic T-800 robots do turn up, its budget screams The Protectinator, starring Alvin Schwarzenedder, directed by Jake Cameroon.

It blatantly pinches a chunk of Fallout and Skyrim's ideas for NPCs and systems, but implements them weakly in a first-person shooter where you wish at least one side of the argument - shooter or action RPG? - won out. The game doesn't commit to either. You play as a soldier huddling down with a group of survivors and running missions to slowly weaken Skynet before eventually hooking up with a better-armed military resistance to fight back. You loiter around a small hub area, then go out on a main mission with a few side quests thrown in for good measure. So far, so standard. In the hub you can craft items made from scrap or trade items for weapons and equipment. To say all of this is half-arsed is an understatement. The first trading post is literally just a wooden box on the floor.

Your ragtag band of survivors initially consists of a kind old man who gives you quests, a random skinhead who says things like, "I'll be on the lookout for fucking tin cans!", and a woman whose character trait seems to be "mother" - one for Kojima, there. Later on there's a soldier lady WHO SHOUTS A LOT. Occasionally someone will reference the first two movies, like when Kind Old Man mentions being at a rock concert when the nukes hit and he survived because he climbed on a speaker? Whatever, grandad. Hurry up and tell me where to go next. Life's too short to give a shit.

Early missions push you to use stealth as you creep past turrets and spider-bots, the lamest of enemies. The reality is that you can either just shoot them with a little pistol or run past them into a new area while they take pot shots. The maps are small, so it's easier to sprint and take a few hits because there's really no sense of danger or threat. 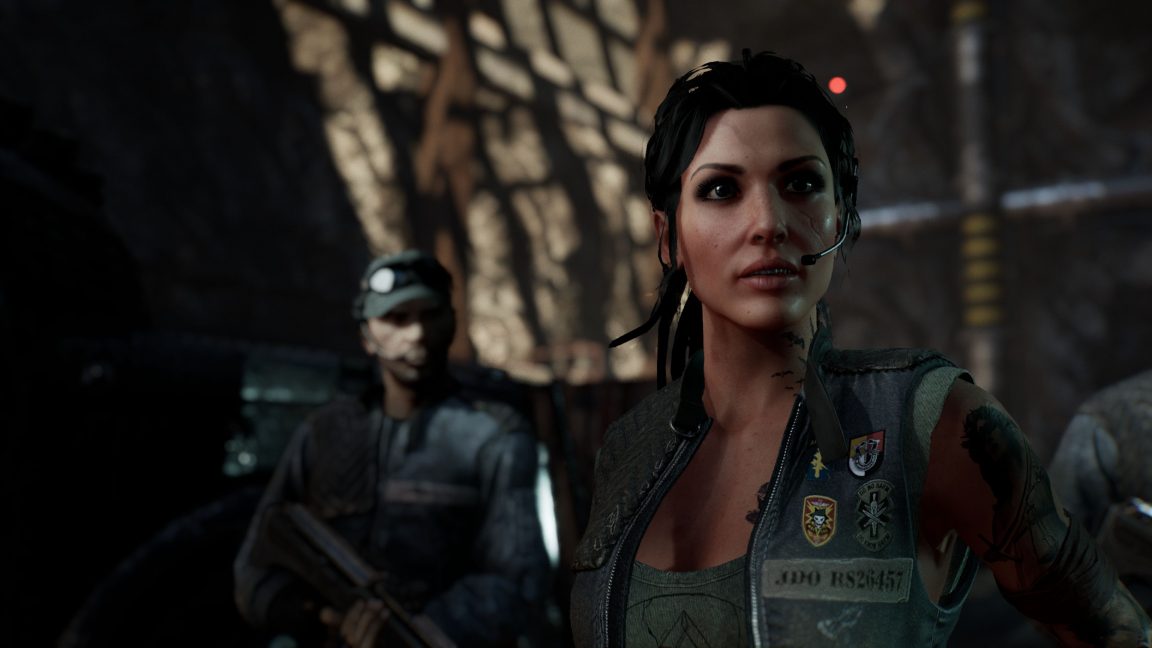 You're also equipped with X-ray vision, meaning you can see Terminators and their poorly conceived spin-off robot friends through walls. Before you get your hands on a decent pulse rifle you'll need to use this to sneak around factories and burnt our cars. You sit behind a vehicle and watch as three hulking T-800s strut passed you, not once scanning the area for hostiles. A threat indicator shows you when an enemy has spotted you, but you can just crouch down and they forget all about you again. These sentient Terminators, this world-spanning Skynet, isn't capable of communication across that network. Aside from following you in line of site, they do not pursue you to the end of the Earth. They do not hunt or kill. They largely mind their own business.

When you do get a decent weapon and the T-800s turn up in force, the game pushes you through a bunch of anemic action setpieces. "There's too many of them" shouts one of five resistance soldiers, as four Terminators appear behind another concrete wall. "Got grenades? Fucking throw them!" shouts Shouty Woman. You stand there and plug ten shots into the head of a Terminator and it drops dead with barely any return fire. When you reach the end of the mission, the screen fades to black and a static cutscene pops up, like everyone's a bit embarrassed about what just happened. It's like the end of a drunk orgy, where the crap drugs have worn off and you're standing around in someone's damp kitchen staring at pot-bellies and sweaty flesh.

Once the real resistance turns up it settles into more of groove, where you're switching between stealth and firefights, but it's only ever functional, never thrilling. At this point, and as if to really destroy any pretence of this being a Terminator game at all, you're handed knives. These are Terminating Knives. Yep, you can sneak up and one-hit kill a Terminator. With a knife. Just like the movies. 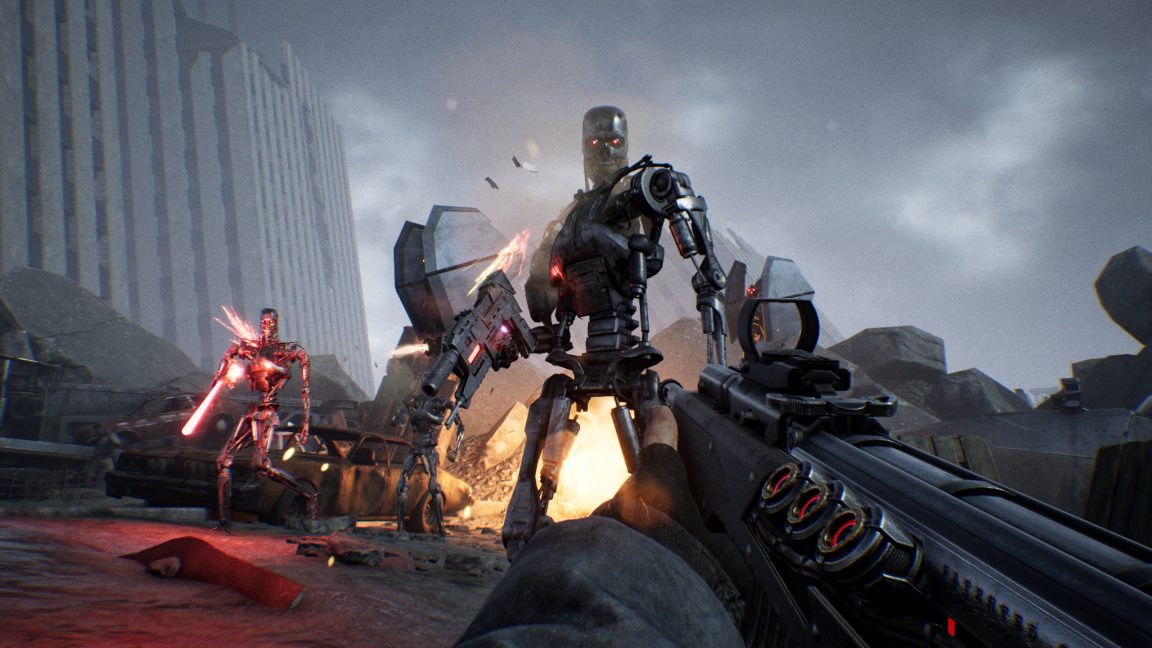 It goes on, this relentless war against the machine. The machine being the game. People shout orders but you just follow a yellow marker to get it over with as quickly as possible. Things explode like a soggy firework. You can upgrade a bunch of skills for five percent more damage. There's a little mini-puzzle to upgrade pulse rifles which is actually quite neat. You hack computers by playing a version of Frogger (or Crossy Road if you're under 20). There are dialogue trees and some NPCs marginally react to your comments, but it doesn't really go anywhere. Yes, someone mentions a plasma rifle in the 40 watt range. For some reason there's a reference to One Flew Over the Cuckoo's Nest. There are a few odd quirks; if you leave an area you fail your sidequests. But it's not buggy, not at all like a Bethesda game, but that's probably because it's so unambitious. There's a mysterious stranger knocking about, part man, part machine. He wears a hood, the most nondescript of character design outfits. He throws you about. I think we all know if there's going to be a twist here it's as weak as you nan trying open a bottle of pop.

That's the problem with Terminator Resistance. It's weak. It's unambitious. It takes a license and slaps it on a distinctly average game. And then stomps on the best bits of the license so all that's left is the cool-looking T-800 and some vague references. What's the weakest definition of terminate? To stop. Just stop. Target stopped. The Stoppernator.

Version tested: PS4. A review copy was kindly supplied by the publisher.