Xbox Game Pass titles for May have been announced, and as previously reported, the headliner for the month is State of Decay 2.

Eight titles are being added to Xbox Game Pass for the month of May alongside State of Decay 2.

Homefront: Revolution, Overcooked, The Escapists, Unmechanical: Extended, and Sonic & Knuckles will be added on May 1.

Futuristic sports game Laser League will be available on May 10, the same day it releases on the Microsoft Store.

State of Decay 2 will be released on May 22 and join Xbox Game Pass that very day.

If you aren't a subscriber, the Undead Labs-developed title will run you 29.99 for the standard edition, and $49.99 for the Ultimate Edition.

Ultimate Edition owners get four days early access beginning May 18. It includes the Independence and the Daybreak Packs which will be available to all players at a later date.

State of Decay 2 also features cross-platform co-op with up to three other friends on Xbox One or Windows 10 PC.

Microsoft announced in January all Xbox One exclusive, first-party games would be added to Xbox Game Pass on release day. Undead Labs has a multi-year, multi-title agreement with Microsoft Studios. 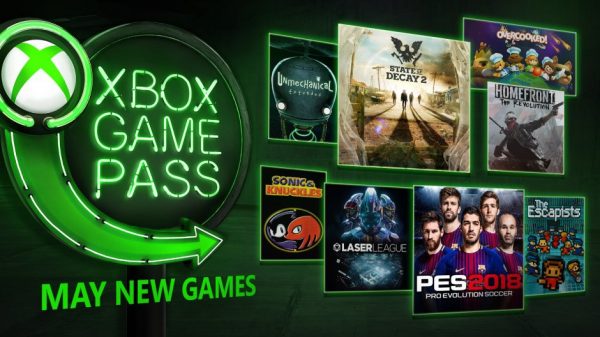 From April 26 to May 8, Microsoft announced today new members can take advantage of a limited-time introductory offer and get the first month for $1. Xbox Game Pass will cost $9.99 per month afterward.

Subscribers are granted unlimited access to over 100 games - the subscription must remain active.  Members can also take advantage of Xbox Exclusives for just $1 as part the Endless Play sale.

Microsoft's Xbox One games subscription service launched in June 2017.  Microsoft updates the service monthly with at least five new games, and the titles are cycled out after several months.

Should the Xbox Game Pass subscriber enjoy the title, they have the option to purchase the game once it’s replaced.