Saint's Row 4 is one of the maddest games we've ever seen. VG247's Dave Cook checks it out and speaks with Volition Inc.

However, THQ's Danny Bilson saw potential for a full game, and so, Saint's Row 4 was born. It really is a full game, despite the negative reaction aimed at Volition's recent reveal.

Volition announced the game alongside a mad teaser trailer. You can watch it in full here.

The studio is letting gamers vote for what they want to see in the Saint's Row 4 special edition bundle. Cast your vote here.

Last week I woke up really early, boiled a coffee and got dressed, just like any other day. I dragged myself to the train station, bought myself more coffee and hopped the first carriage to London. I had to wait ages for a strong enough phone signal to check my work emails. It was annoying.

It was meant to be a day like any other. Then Volition Inc. blew my tits off.

Oh, you also have super-powers by the way. Why ride in a car when you can run through traffic using super-speed? Why walk around a skyscraper when you can jump over it in one leap? Why fight with your bare hands when you can use telekinesis to throw them into orbit? Why indeed.

You also have a Dubstep Gun that fires Skrillex riffs at people. It makes them dance like morons, just in real life. Any cars caught in the blast suddenly sprout hydraulics and start bouncing around to the beat. You can pilot a mech. When walking past civilians you can DDT them just for shits and giggles.

Seriously, read all of those features back and try telling me it doesn't sound like a riot. Then compare them to my boring, everyday story at the start. Which would you rather be doing? 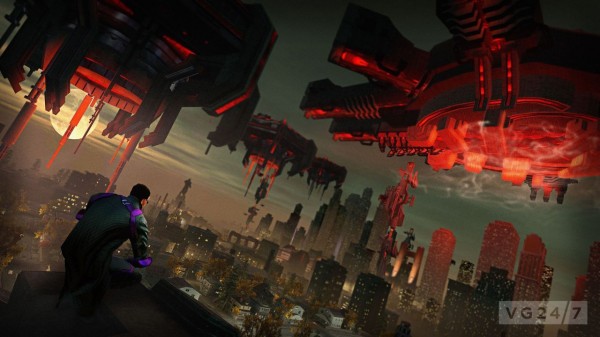 Clearly you'd rather be freezing people with your mind and shattering them with one punch than be a Scottish bloke with bad hair and even worse cholesterol. This is why the Saint's Row series is so appealing. It's a mass power trip that exists purely in the name of fun, letting you do the impossible.

“For example, the Dubstep Gun was literally on this email chain going around the office asking for weapon ideas. Someone had just written 'Dubstep Gun'. We didn't even know what the hell it was, but it sounded amazing. We knew there was something there so we just came up for more ideas around it.

“But sometimes ideas just don't work out quite right, so off they go. As silly and as over the top as we are a lot of the time, ultimately our goal is for people to have fun. So there are times we come up with crazy things that aren't fun, so we cut them.”

'Fun' really is the best and only word to describe Saint's Row 4. When you see it running you'll want to crack a big smile, especially when you realise the sheer scope of what's possible. Boon showed me a 'Flashpoint' scenario where the president is fighting Zin grunts on an rooftop. 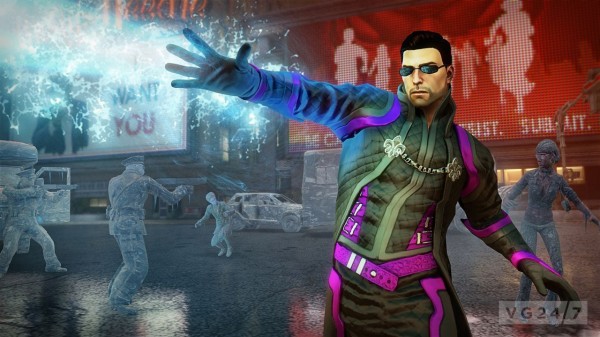 He started by pulling out a pistol and shooting a few of them from on top of the adjacent building. He then performed a super leap over the gap and rained down with a brutal ground pound, sending the little buggers flying. He then froze the pack and started hurling them around with telekinesis.

Within seconds they were reduced to icy shards. I laughed. Try to picture the scene, and then imagine it with a second person in co-op. The ability to combine superpowers, insane weapons, and vehicles that pack serious firepower is a recipe for madness. I'm sure fans wouldn't have it any other way.

Boon continued, “One of the reasons we added superpowers is, in all of the Saint's Row games – the two core mechanics were combat and driving. Superpowers are a great way for us to change how they feel. So if I want to drive, I still can. You can grab cars, customise and upgrade them, all of that.

“But if you want a change of a pace, and you just want to super sprint down the street, then go for it. The same with combat, because I can still take a gun and shoot people. It's no problem. But if I want to use my ice blast instead, then I can.”

Saint's Row 4 is out in August, and while we've just seen the reveal of PS4, Boon confirmed that the the game is releasing on current-gen consoles only. I have to point out that it looks absolutely superb running on PC though, and it doesn't look like the shallow DLC release some gamers are calling it.

I asked Boon if Volition would consider a next-gen port, “It's something I wish we could do, because obviously with next-gen consoles, the things they can do are amazing. But unfortunately with the timing we had it wouldn't have worked out. 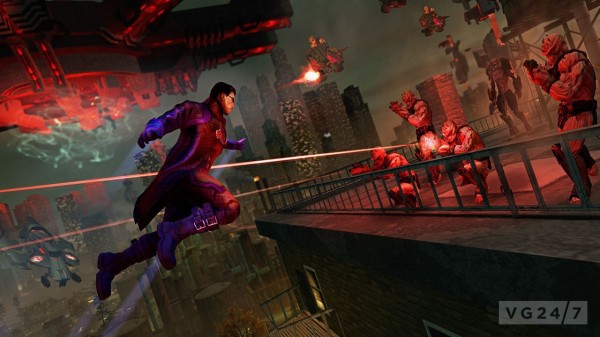 “In the past when we did Summoner for PS2, we did that as a launch title. It was one of the most brutally difficult projects we've ever done, The problem was that the game wasn't nearly as good as it should have been, because we rushed so hard to get it out in time.

“That's why when there's a new console cycle coming in, we tend to back away from it in terms of taking our time, rather than trying to rush something out on it. It means we can do it, and support the format in the right way.”

This makes sense, because nobody wants to play a rushed hatchet-job of a game. Plus, Volition is still easing into its new life under publisher Deep Silver. I asked Boon how the team felt when THQ was collapsing around them.

“It was a tough time because we had a lot of friends at THQ who didn't work on projects that got purchased. It was pretty sad from that standpoint. The thing we felt good about internally at least, was that we knew Saint's Row 4 was so far in development and was showing so well.

“We knew that THQ investor Clearlake – who was also our one – wanted to buy us no doubt about it. So we thought, 'No matter what we've got a job', because either they'd buy us or someone else would.

“Having said that there was the question of who was going to buy us, and what that would mean. In other words, was it someone who would come in and change our culture? The good news for us with Deep Silver is they're fully supportive of what we do, of our culture, our internal processes and most importantly our game.”

It's lucky that Saint's Row 4 survived, as it's the antithesis of the po-faced, gritty gaming experience. Its tongue is almost bursting through its cheek. When you consider that the game brings back all of the features from the third game, then adds a whole new suite of toys raise hell with, you might find it hard to comprehend.

Essentially, think of something truly bat-shit crazy and Volition probably has you covered. I can't wait to see what else it has up its purple sleeves as we roll on to August. We'll have more further down the line.

Disclosure: To write this piece Dave attended a Deep Silver showcase day In London. All travel was paid for by VG247. While catering was offered at the event, all food and drink was bought by Dave. No other merchandise or advertising was offered or accepted. He now can't get Skrillex out of his head and would like it very much to stop.