Throw on the headset and you're in a different world within seconds. But is it a place you need to be? 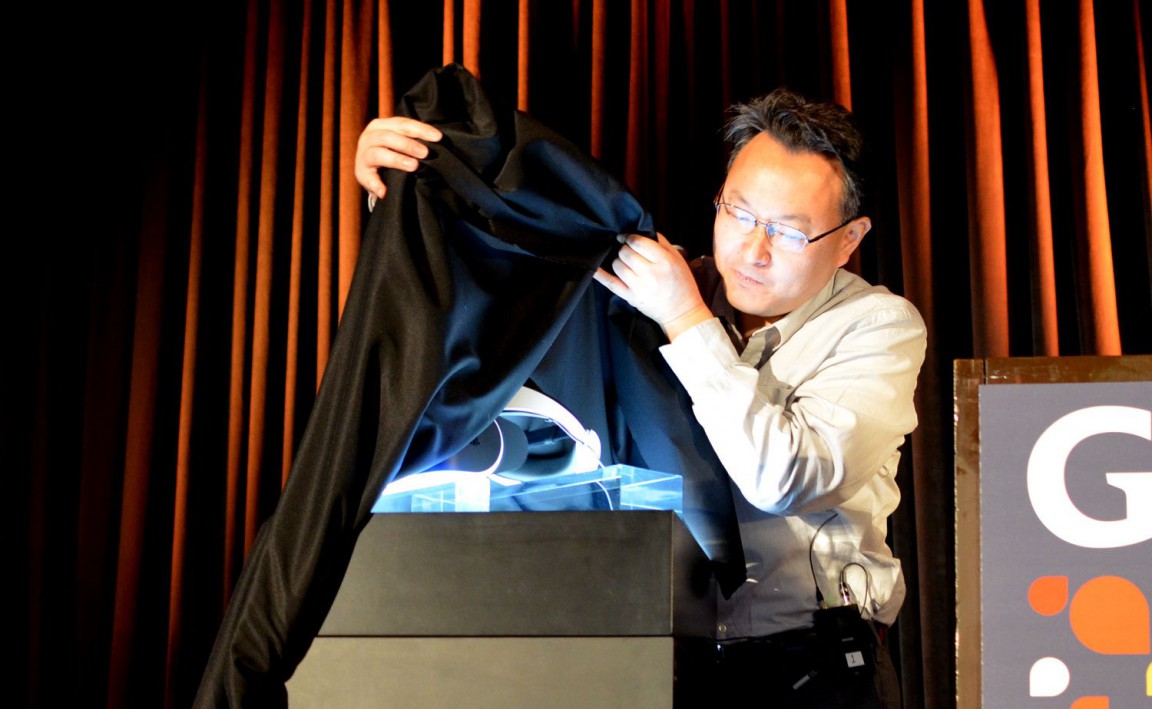 PlayStation VR arrives tomorrow, the first home virtual reality unit designed for a mainstream market. While HTC Vive and Oculus Rift have grabbed the imagination of the development and hardcore PC gaming community, PS VR is unashamedly aimed at the traditional console player and surrounding family, where pop culture brands like Batman, Star Wars and Call of Duty can have a home alongside experimental games and novelty experiences. It's an everyman approach that always serves Sony well and offers plenty of room for growth depending on who picks up the PS VR after the excitement of the initial launch calms down.

After 10 days playing with the unit and multiple virtual reality games there's a lot to discuss, from comfort and accessibility down to individual games and whether VR has a real future on consoles.

"It's a great example of smart product design and idiot-proof clarity. If you struggle to set this up you shouldn't be allowed around plug sockets."

Set up of the PS VR couldn't be easier. Every cable is labelled and the printed instructions are a big old floor book that basically says "do this, fool". Anyone who's tampered with a PC recently or calibrated the convoluted HTC Vive will appreciate a step-by-step walkthrough without any complications. It's a great example of smart product design and idiot-proof clarity. If you struggle to set this up you shouldn't be allowed around plug sockets, basically. 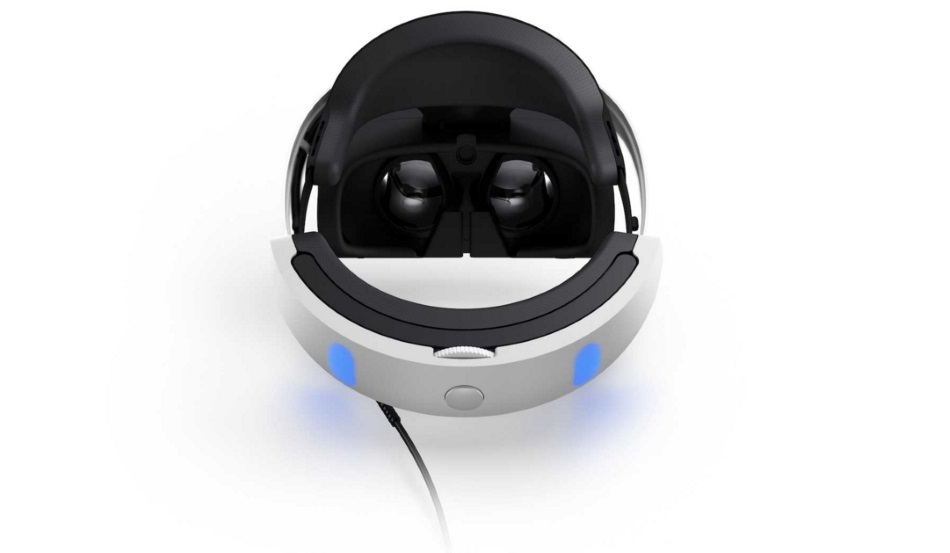 Getting the headset screen and vision right takes a little bit more tweaking as it's a personal set-up. But being able to adjust the headset screen and push it forward and back feels great. The headset also sits more comfortably on your head than the Vive, which tends to grip your face like a pair of scuba goggles. It rests more on your head and back of the skull, supporting the weight of the unit rather than it hugging your face.

The cool rubber that sits around your eyes and nose is comfortable too, especially for those of us who wear glasses, and there's very little light able to creep in. You can also recenter the screen once it's on your face by holding the Options button down for two seconds, and you'll probably spend a fair bit of time tweaking the fit depending on how weird your head is. I have one ear lower than the other like some kind of mutant but it's not a problem.

You'll find that you need to adjust the headset while playing, and it'll take a few minutes to find that sweet spot. Chances are you'll lose that sweet spot after half an hour or less and have to readjust, which can upset your immersion. You can open the quick menu to adjust headset position easily enough, and I found I was doing this as a matter of course for each new game or session I tried. Better to have everything right in place before you start than have to pause the game because images are going blurry. 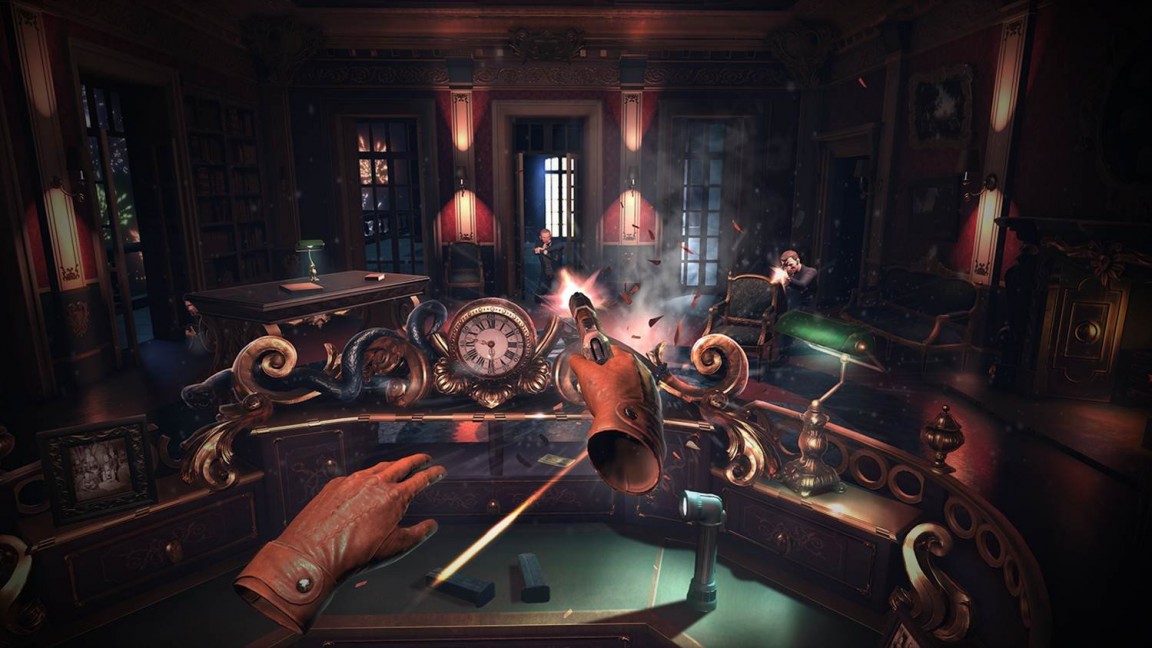 When it comes to tracking your position, the PS camera uses the lights on the headset, DualShock 4 and Move controllers, so it's worth dimming any lights in your room and pulling curtains if you're sitting in direct sunlight. If not you'll notice the screen wobbles when you're not moving, but it's an easy problem to correct. There's a neat VR menu option to Confirm Your Position which shows bright lights on screen as dark colours. If any of those aren't your headset or controller, you're going to need to switch them off or cover them up.

In terms of space, you'll only need to sit about two meters from the camera, which seems reasonable in our tiny European houses. Once you're comfortable with the headest you'll find that tracking works well and accuracy seems spot on for the helmet, Move controllers and DualShock 4. Using the machine pistol in London Heist feels like you can really pinpoint targets, tyres, windows and headshots, and you can put spin on the ball in Danger Ball with a twitch of your neck.

The included in-ear headphones aren't bad, but if you've got a proper overhead set of ear-cans you're going to want to use those instead. Once your ears are cupped inside those and the headset is on you'll feel much more submerged in VR. It's worth noting that wireless headsets aren't supported at all - not even Sony's official PS4 headsets.

One of my gripes with the HTC Vive is the prominence of the screen-door effect, where visible geometric shapes are like spots in front of your eyes. Even after extended play I didn't find it as noticeable with the PS VR, but the quality of the screen is always going to be a limitation. What you see is a sort of light mesh effect in front of everything, like you're looking at the game through a very fine sieve. It's something you have to accept when using any VR headset but that's not easy when we've spent the last few years spoiled by 1080p, 60 frames per second wonders. 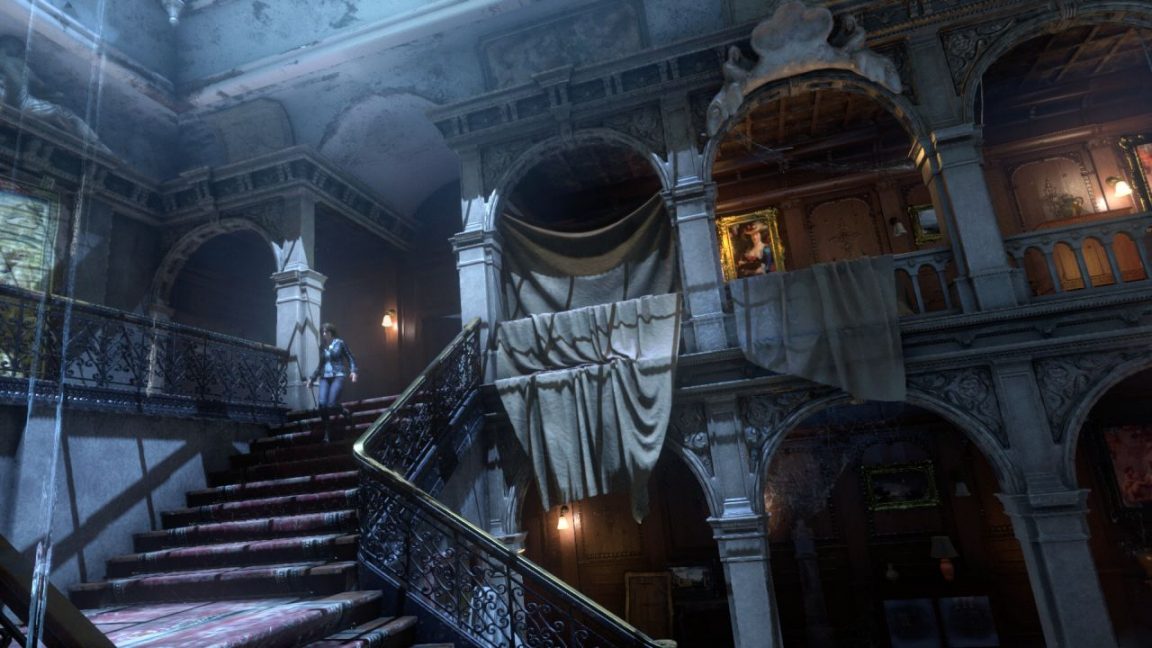 "Visual fidelity is nowhere near as sharp or defined as we've come to expect from the PS4 and the reality is closer to PS3-era graphics. None of these games are going to look like Uncharted 4."

Visual fidelity is nowhere near as sharp or defined as we've come to expect from the PS4 and the reality is closer to PS3-era graphics. None of these games are going to look like Uncharted 4. None of these games are really going to be at the standard we've come to take for granted from the current PlayStation and I find that a little hard to deal with at times. Textures are blurry and undefined, edges to structures and characters are blocky, objects at a distance are often very difficult to make out.

But that's the nature of VR in 2016. If you can't get over that, you're not going to get a lot out of any VR headset. It's going to be an even more prominent gap when you compare the visual fidelity of PS VR to the PS4 Pro when it comes out next month. It's initially a jarring step down in quality. At this stage it's acceptable and I'm fine with it, although you have to ask yourself if hardware that costs £350 should settle for "fine". I've certainly gotten used to average streaming services, long downloads and the convenience of YouTube quality over 1080p, so maybe "having it now" makes up for average tech solutions.

Having said all of that PlayStation VR can do close-up really well, especially when it plays to the space illusions that VR creates. Bullets rain down around you, dust particles drift across your vision in the breeze, and you can see the wrinkles in characters' faces when they lean in to snarl at you. Games that play to this are the most effective, and it genuinely feels like something we haven't experienced before in games. Just check out the warehouse and pub scenes in The London Heist or pretty much all of Batman: Arkham VR to see developers who really understand how to get the best out of the technology. 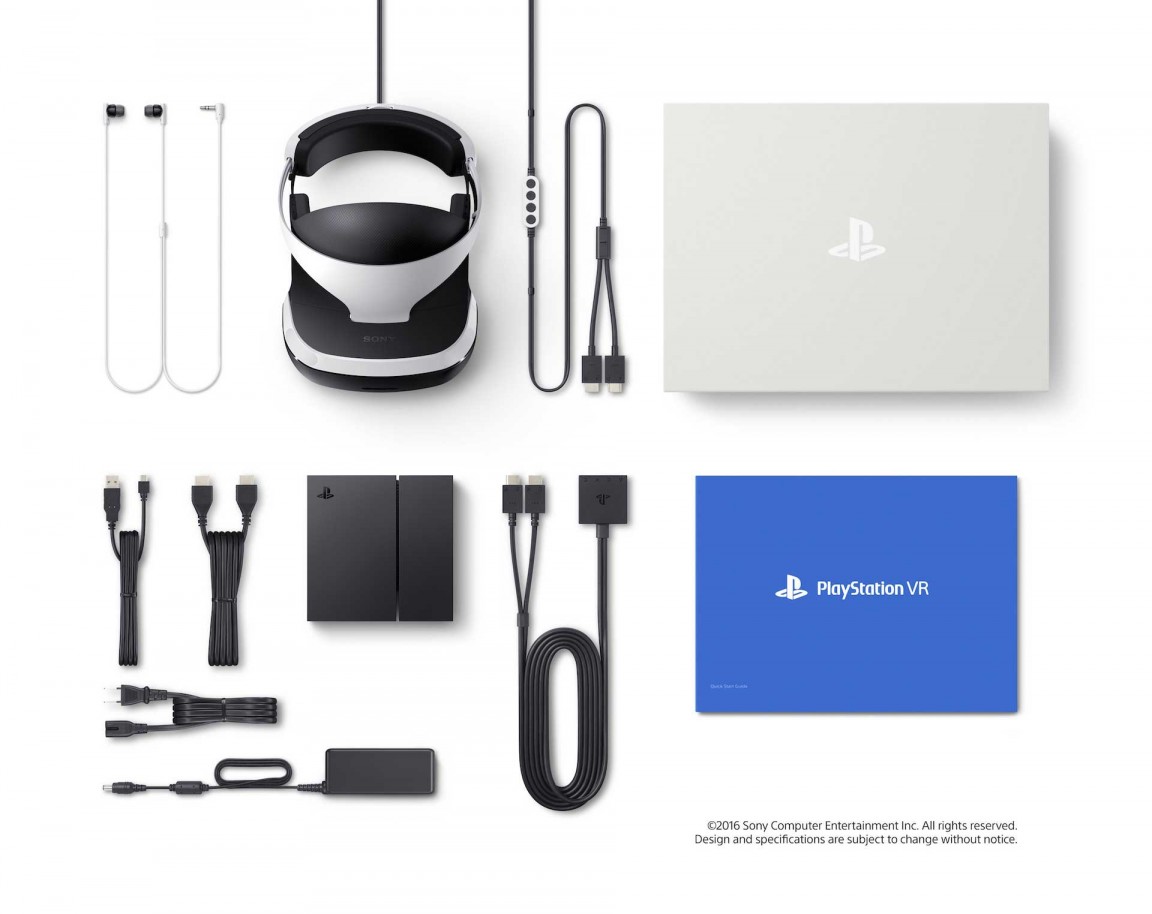 Should you buy PS VR?

It's a lot of money - you could buy a new PS4 Pro console for the price, or just a whole lot of great games that are coming out this year - there's no shortage of them. If you can afford it and are set on being an early adopter then reviews of the PS VR aren't going to stop you.

"Nothing can do the sense of immersion like VR can, and even as a novelty it can be great fun. As a glimpse of what could be in five years' time it's mouth-watering."

As for the launch games, Rez Infinite, Until Dawn: Rush of Blood and Batman: Arkham VR are personal stand-outs for me, and there's fun to be had with RIGS: Mechanised Combat League, Battlezone and Here They Lie. But none of these feel like system sellers beyond their initial rush. VR is a lot of fun, and it can provide plenty of neat experiences. But it's not the console gaming you're used to, it's not as social, it doesn't yet have any of those games that you've been playing for 100s of hours at a time with friends new and old. I think we need to accept that this isn't the future of video games. It's a new direction, and an interesting one, for sure.

Although I was fine with the step-down in visual quality to begin with, now the novelty has worn off it continues to bug me. We're so used to the advancement of quality in console and video games that this genuinely feels like a regression. I know this is the best that can be done at this price, and it's a remarkable achievement, but many PS VR games feel like a throwback. The all-encompassing nature of VR is great for immersion, but when it looks ugly, it's not a place I want to be. 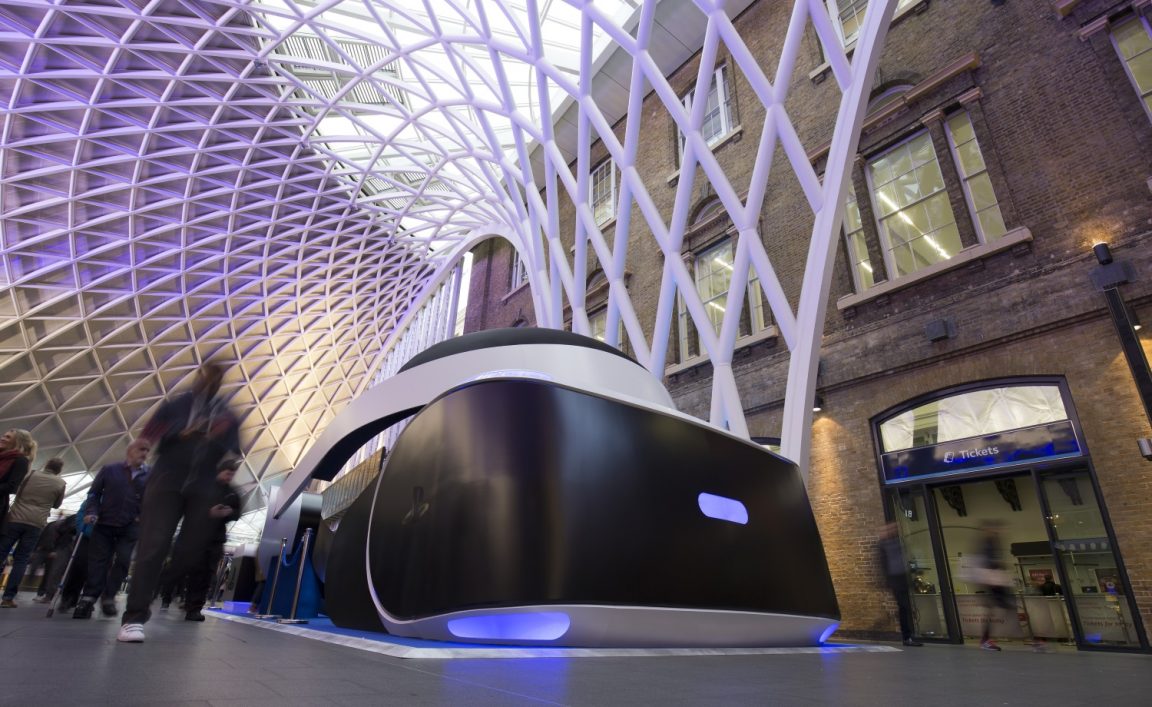 There are also questions about the long-term support PS VR will receive from Sony, but that's up in the air until after its first three months on sale. And you should be aware that VR can make you feel sick on occasion. I find a lot of games give me nauseous feelings - some pretty much immediately and some after an hour of playing. That's going to be a personal thing for most of us, although it does seem that game design which doesn't mimic human interaction well is to blame, too. It's really difficult to gauge until you've experienced it, so if there's any chance you can try before you buy, do it.

Should you buy PS VR? If you have the money to spare and you don't mind your games looking uglier than the PS4 experiences you've been enjoying over the past three years, then go for it. There's a lot to be said for sitting on a couch and just throwing a headset on to get straight into virtual reality - in that sense it's the PS VR's strongest characteristic. Nothing can do the sense of immersion like VR can, and even as a novelty it can be great fun with some genuinely unique experiences. As a glimpse of what could be in five years' time it's mouth-watering.

But if you have doubts or feel cautious about any of the above issues, you'll be much better off waiting for the price to come down and more games to come out after the initial buzz of launch.