Nioh 2’s massive array of skill trees can be confusing. Too much choice can be as frustrating as not enough, so we’re here to help with our experience of the best skills in Nioh 2.

While there isn’t a definitively set meta for the brand-new game, some skills are more useful than others in all situations. There are four core skill trees that just about every character will use: Samurai, Shiftling, Ninja, and Onmyo Magic.

The rest of the weapon-specific skill trees are more down to your personal preference. I often forget to use whatever skills I have equipped in the heat of battle, so lean more towards the permanent buffs on the weapon skill trees.

However, for weapons like the axe, tonfa, and hatchets, equipping yourself with proactive skills is important to cover for the weaknesses of your chosen weapon. For instance, with those three weapon types, there are skills that cover ground or attack more quickly to offset a lack of range. 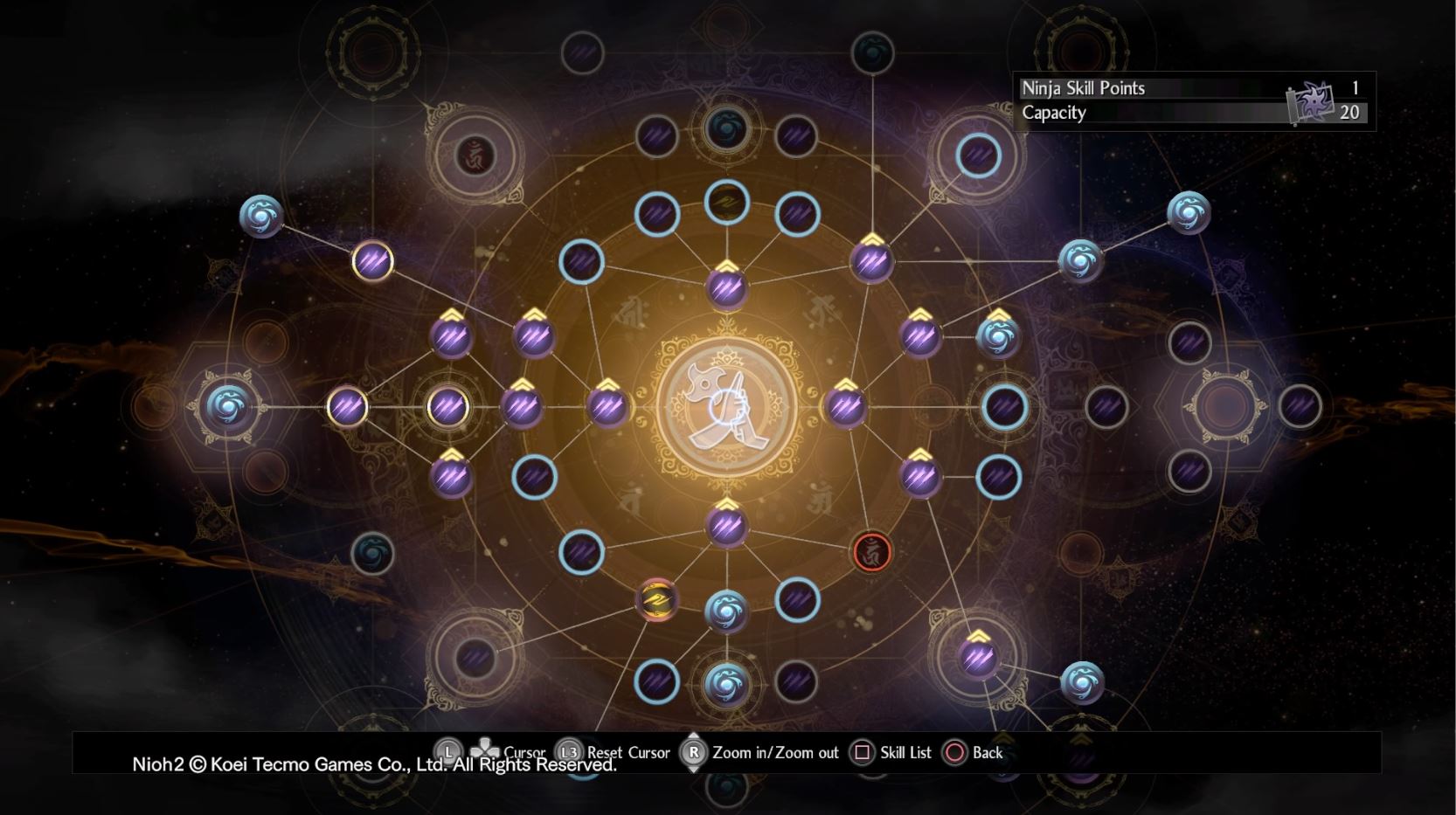 For more on the best weapon types for your playstyle, we have a full guide page, here.

This is low-key the best skill in the game. It comes in low, mid, and high stance varieties and you should pick them all up.

Running Water sets off a ki pulse when you dodge an incoming attack at the right time. This is incredibly important for keeping your stamina high when you’re under pressure and in boss fights - especially in the Dark and Yokai Realm.

When fighting Yokai enemies, you’re going to be performing ki pulse purifications constantly. Why not give yourself buffs while you do it. The mid stance defence buff can save you in a pinch, so this skill is a worthwhile addition.

Personally, I use the Yokai form to spam down the last quarter of bosses’ health bar. That means I want it to last as long as possible under the circumstances.

Demonic Destruction, Demonic Tenacity, and Demonic Discipline are therefore no-brainers when it comes to picking skills. Discipline lengthens the duration of Yokai Shift in general, while Destruction and Tenacity reduce the penalties for spamming attacks and getting hit carelessly.

The Yokai Realm sucks. If you’re not red-hot on your ki pulses you get caught out of ki very quickly, often with gristly results. To stop this happening just as you’re about to finish off a boss with one final hit, grab The Yokai Within to nerf the ki recovery penalty.

This is the same as above, but for the Dark Realm.

How to get a Ninja or Onmyo Magic skill point

It’s all well and good diversifying your character build to incorporate Ninjutsu and Onmyo Magic, but how to get your first skill point in each proficiency is not clear in the slightest.

Without your first skill point, and levelling points you spend on Magic or Dexterity are only good for scaling your Switchglaive or Kusarigama damage.

To acquire your first skill point in Ninjutsu or Onmyo magic you need to use consumable items that drop from enemies or chests. There are two main ways to do this.

The rarer way is to use Ninja’s Locks or Onmyo Mage’s Locks which you can find throughout the world or by completing challenges at the Dojo. But the easier way is to spam bombs, talismans, and amulets.

In the usable items tab of your inventory, some items are marked with a shuriken or paper icon - these are ninjutsu and onmyo items.

To gain a ninjutsu skill point early, try to spam Gunpowder Bombs from your inventory.

To gain an onmyo skill point early, look for talismans or amulets marked with the paper icon. These are often sold in the Kodama Bazaar in the “Make an Offering” tab of shrines. “Travel Amulet”, “Signpost Amulet”, and “Visitor Amulet” will not work.

The regular and enhanced Shrapnel Bombs have great utility. Not only do they deal a decent chip of quite safe damage, but a good connection with the enhanced version will make just about any enemy weak to fire burst into flames.

Whether it’s a boss, tough enemy, or hard to reach grunt, bombs are worth picking up.

Like in the original Nioh, Quick-change is a revelation. These scrolls allow you to survive a hit that would normally be lethal. Dropping you in above an enemy for a cheeky downward stab.

These are imperiously effective against late game bosses who have a naughty tendency of pulling a combo you’ve never seen before out of nowhere and killing you in one hit.

You have quite a long window between when you first use the scroll and its benefit running out, so you can easily pop one at the start of a fight to have a get-out-of-jail-free card running in the background.

All of the basic talismans are good at different points in Nioh 2, so it’s no bad thing to have access to them all. Purification helps to reduce the ki of Yokai enemies, leaving them open to staggering and grappling when they use a burst counter attack.

Aquatic and amphibious enemies very much do not like Lightning, where flaming enemies like Ippon-Datara and Wheelmonks are weak to water damage. Pretty much everything which isn’t soaking wet or already on fire can be hurt over time with burning damage.

Rather than a Magic technique, this is a useful buff which extends the reach of your purifications. I found that this works extremely well with the Shrine Maiden armour set that restores your health on purification. One to consider.

This is a definite must-have for almost any character. Sloth magic massively slows an enemy’s movement speed, leaving them open to counter, or just making it easy to avoid their attacks.

It works on just about every nasty man and evil yokai in Nioh 2, including bosses. If you’re finding a particular enemy too hot to handle, a quick Sloth shot will give you a brief window to catch your bearings.

Anecdotally, I think it’s seen a small nerf from the original Nioh, but is still good. However, it does make the timing of burst counter attacks very, very funky - so it’s probably best to just dodge them when slowed.

If there's one fundamental truth in Nioh 2, it's that you can never have too much healing. Rejuvenation Talismans allow you regain small amounts of health over time, which can mean the difference between life and death in a tense boss fight.

For help with the basic of Nioh 2's combat, including how to pull off a perfect Ki Pulse, check out our tips, here.

Otherwise, we also have a run-down of how to make the most out of your starting Guardian Spirit and Soul Cores.