The Wonderful 101 is a a cleverly-produced game exclusive to Wii U. VG247's Dave Cook plays Platinum's final code and ponders if it deserves to go beyond Nintendo's borders.

Developed by Platinum Games, The Wonderful 101 is a Wii U exclusive release.

It hits Europe on August 23 and North America on September 15.

There's a demo available now if anyone's curious to try the game pre-launch. Get the details here.

We've also got a gameplay trailer from Platinum Games if you'd like to see it in action. Watch it here.

Whenever I'm asked to describe The Wonderful 101 I tell people to imagine a game like Devil May Cry or Bayonetta, where the main character is actually made up of about 50 little characters. It's a bonkers elevator pitch worthy of Platinum Games' wildly imaginative back-catalogue.

The game is certainly worth playing but I'm concerned that such a refreshing idea is being wasted as an exclusive for Nintendo's under-selling Wii U, seeing as the company only sold 160,000 consoles in Q1 this year. It's a woeful statistic.

It's a shame because the game itself is colourful, funny, smart and challenging, yet it isn't perfect. I've seen a few gamers already hailing The Wonderful 101 the game Nintendo needs on its format, and as a fellow Platinum Games fan I understand where the enthusiasm is coming from. Personally, I just felt it was a mixed bag.

So what is it then? Well, the plot sees an alien force known as the Geathjerk invade Blossom City with an army of big stompy mechs, beret-wearing lizard generals and two-headed, flame-spewing robotic dragons. They tear around the city streets and rip it apart like it was made out of part-baked LEGO. It's bat-shit crazy from the opening scene.

Needless to say, their wanton destruction of Blossom City simply will not stand, which calls together The Wonderful 101; an elite band of citizens charged with Earth's protection. Under the guidance of the CENTINALS peacekeeping force, these ordinary men and women band together under the leadership of the game's protagonist Wonder Red.

The interesting hook here is that Red's followers can form shapes by using either the right stick or Wii U touch-screen to craft weapons, objects and more. For example, drawing a straight line over a wide gap will see the team link up and form a bridge using their Unite Morph ability, while tracing a circle around panicking survivors causes them to join your ranks.

The mechanic also fuels combat in that certain shapes will cause the team to form weapons, depending on who is leading them at that moment. Draw a circle while Wonder Red is in charge of the pack and they form a huge fist that he can use to smash through Geathjerk troops.

To see this content please enable targeting cookies.
You can watch me play and discuss The Wonderful 101 in the video above.

An 'L' shape will form Wonder Green's gun, a straight line causes an almighty sword to appear over Wonder Blue's head, while an 'S' shape will give Wonder Pink her massive, spiked armour-crushing whip, just to name a few. it's the equivalent to weapon-switching in Bayonetta, except the more people you use to make the shape, the bigger your weapon will be.

Fighting a 60-foot mech? No worries, just draw an even bigger straight line to give Wonder Blue a 60-foot sword. Sorted. While you're pummelling the mech with that, why not draw a circle and press the assist button to call in Wonder Red for a quick, simultaneous fist smash? Such combo-chaining isn't integral to success in The Wonderful 101, but reducing giant enemies to scrap in moments through smart play is incredibly empowering.

Given all of the emphasis placed on superhero movies these days, The Wonderful 101 is timely. Aesthetically it nails the vibe that ran through The Avengers' finale, as whole city blocks are reduced to rubble by advancing hordes, while a band of brave heroes fight to repel the threat.

It's often an awe-inspiring spectacle to witness, but the frustration of certain gameplay issues shattered that vibe and simply frustrated me on several occasions. For starters, the lack of camera control in some - not all - instances is a real pain. One example early on sees you trying to reduce a huge mortar turret to rubble while fighting a pair of tanks.

I often found I was being rushed by the tanks from off the screen almost without warning, giving me barely enough time to respond with a dodge move. Plus, whenever I ran behind the turret I found I couldn't see my team. Once both tanks rolled over and pinned me behind there, I was quickly being battered about, snagged between them both, unable to see what I was doing. The ability to rotate the viewpoint would have been welcome.

This was a one-off, painfully annoying occurrence, but I did find that whenever you're not in combat the camera zooms in really close, stunting your peripheral vision to an irritating degree. These are mild issues overall, but what really let things down for me was the amount of beginner's traps during some encounters.

Some enemy attacks are poorly signposted, and it's often unclear what you need to do in order to counter them. One battle sees you being rushed by a flying enemy while a countdown rapidly ticks away. I lost a lot of time trying to jump up and smack the guy with Wonder Red's fist only to be killed a few times. As it happens I had to use Wonder Blue's sword. 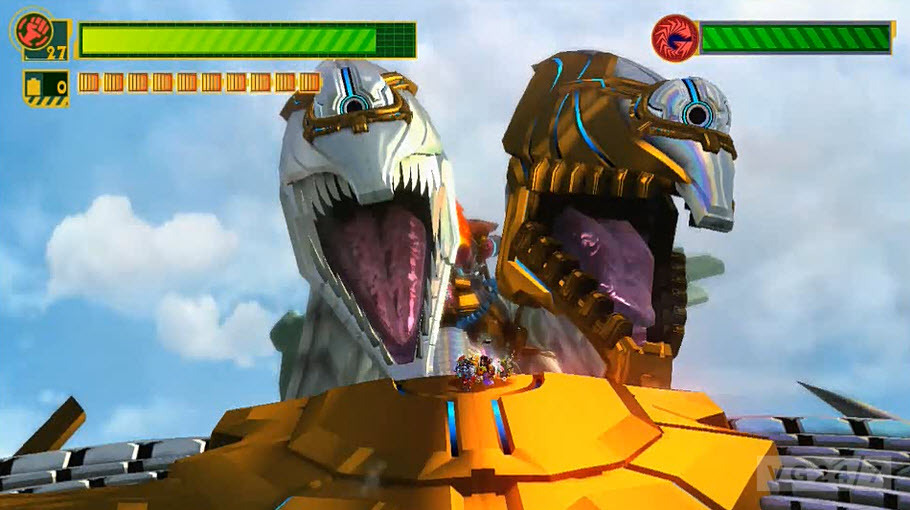 Such is the trial and error nature of many of The Wonderful 101's mechanics. Some attacks seem impossible to avoid until you know exactly what you need to counter them. There's a crafting system that uses ingredients found on the field. It's buried under a few menus and never flagged up as an option to players. I found it be accident.

For the record I was playing on normal mode, which is the highest tier available to you at the start. It's challenging make no mistake, but I often felt it was unfair and grating as a result. One section that sees the view switch to your GamePad beneath a baseball stadium was a horrible and clunky, causing Wonder Green to stutter and move slowly. Navigating him up a simple staircase was more of a chore than it should have been.

The GamePad was also ineffective at recognising the shapes required to trigger certain Unite Forms, although I was honestly starting to suspect something was up with my controller, as I haven't seen anyone else mention they had issues. I spent a good two minutes trying to draw an acceptable triangle to form a hang glider so I could fly over a canyon. It wasn't fun, but I suspect I might be alone in this.

All of these complaints considered, I still had fun with The Wonderful 101. I'm far from finished at the time of writing so please don't treat this as a full review or anything like that, but this is a game with real heart. It's a superb homage to superhero culture, with a great cast, ace jokes and insane set-pieces that sit comfortably among Platinum's library of releases.

Games like this need to exist to break the monotony of the worn templates that dog our industry. Familiarity is often enjoyable if you want a gaming experience you can tune into after a hard day's graft, but The Wonderful 101 is too vibrant to only give it just half of your attention.

It demands your full focus, plenty of practice and it tries new things at a time where companies are just pushing better visuals as 'innovation'. There are things in this game I've never seen before, and that's rare in today's console circuit.

I'm just worried that all of this effort will go unseen and under-appreciated as a result of the game being exclusive to Wii U, a format so closed that even heavyweights like Ubisoft, EA and Activision want little to do with it.

That's the real shame in all of this; that something genuinely intriguing might be pissed away without having a fighting chance to shine.

Disclosure: To help write this piece, Nintendo sent Dave a Wii U eShop code for The Wonderful 101.