The thing that stays with you is the sound. Not just the roars of RPGs being propelled from their launchers or the menacing bleeps of IEDs. Not just the rattle of arguing assault rifles, either. It's the way all these sounds, together with nigh-constant voice acted lines from human and AI soldiers, build the scene. Insurgency: Sandstorm might not have Battlefield V's fearsome graphics options or the Hollywood production values of a COD, but in audio terms, it's peerless.

That sound design tells you a lot about the game it wants to be, the game it ends up being, too. When you shoot an enemy player you don't hear that additional cartoonish thwack in your headset as you do in most other multiplayer shooters in 2018. Your crosshairs don't gain extra elements to indicate a hit, because there is no crosshair, only the gun's scope or sight. At first that makes weapon feedback feel lacking - did you hit that guy peeking out from the sandbag or not? - because you're being weaned off an entirely unrealistic combat loop. Reach COD cold turkey, though, and you gain a real appreciation for Insurgency's hardcore approach. 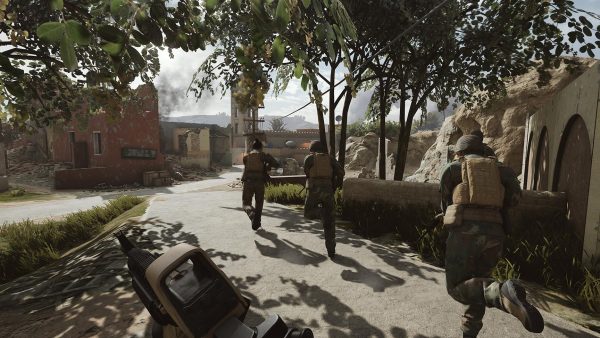 This is a multiplayer shooter played in co-op or competitively, looking perhaps to occupy the space between CS:GO and Rainbow Six Siege in terms of the action-tactics tug of war, and offering several variants on control point capture mode. I'm doing Insurgency: Sandstorm a huge disservice by describing it in such colourless terms though, because this is also a multiplayer shooter with an uncanny knack for excitement.

Insurgency's developer New World Interactive has muscled in on this space, usually reserved for long-running franchises with major publisher support, with sheer grit. What began as a Half-Life 2 mod grew into a full release in 2014, the Insurgency franchise making its name for realism and community feedback response. Insurgency Sandstorm still has a bit of that Source Engine ruddiness baked deep into it, despite a change of engine and a plethora of visual effects that seem to tank my GTX 1070’s performance below 60fps at 1600p. It still has a bit of mechanical jankiness too, in vehicle behaviour and player animation, which recalls its origins as a plucky mod. But honestly, in the heat of the moment none of that matters. Because - and stop me if I've already said this - it has an uncanny knack for excitement.

And, look, if I knew exactly what made uncannily exciting shooters do you think I'd be sitting here writing this review? No sir, I'd be politely but firmly telling a journalist with a lanyard that my team's not ready to talk about multiplayer yet in a conference hall backroom. What I can say is that I never feel truly safe in its expertly arranged control points, because unless I'm playing with a well-organised team there's always an entryway or window I can't keep an eye on. And that means there's always the possibility of a last-second rush from Insurgents, an Insurgency you might say, just as victory looks assured. I can also say that I spent one entire round as the gunner in a vehicle without dying, and somehow managed to win the round using a telepathic connection to the driver and a lot of holding down LMB, and I think that's brilliant. 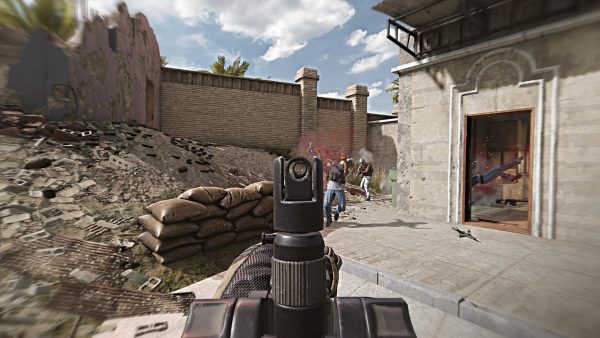 It's also brilliant to be given the keys to the kingdom right from the start of the game and select a weapon, scope, foregrip, attachment, secondary weapon, accessories and armour type without the need to open 10,000 boxes earned over 100,000 hours of play. I find myself spectating the best players in each round when I die and engaging with what I'm watching more than usual, because I know what they're doing is what I could be doing. If they're using a better weapon, it's because they knew to set it up that way, and by spectating now I do too.

And yes, I spend quite a bit of time spectating, because I’m not MLG standard at Insurgency Sandstorm and respawn time is tied to objectives. If your team takes or holds an objective in co-op, you respawn (this might take four solid minutes if you’re unlucky). If your team runs out of redeploys in multiplayer, you respawn only at the beginning of the next round (this might take longer than four minutes). Obviously this gives life and death a bit of weight, but it’s not primarily responsible for the pervading sense of fear.

That comes down to the sound again. It really is excellent sound. Context-dependent voice lines in a hardcore team multiplayer FPS ought to be a minor annoyance, or an accidental comedy, but instead they tell you an essential truth about modern military combat that the vast majority of titles brush over: fighting people with guns is fucking scary. 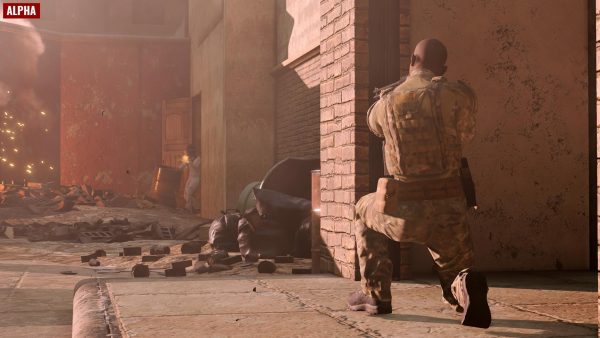 No one, absolutely no one ever, sounds cool and collected in this game. When you spot an enemy, your character usually shouts something panicked about it. When you have to reload - actively, by the way, so often you die clicking away at an empty magazine - your character sounds absolutely terrified about it: “Shit, shit, I’ve got to reload!” Or sometimes just “Shit! SHIT!” So when you’re together as a group, you sound like a bunch of quivering panicked people who’d rather be anywhere else, but who are forced into combat. Without ladling it on with a big old spoon like Battlefields 1 and 5 and Call of Duty WW2 did, Insurgency Sandstorm makes you think about the people who find themselves in these situations in real life. It’s a real feat of tonal acrobatics, conjuring empathy and breakneck-speed enjoyment in the same round.

Thanks to this quite unusual combination of tonal sensitivity, hardcore shooting mechanics and maps full of interesting wrinkles and choke points, I’ve enjoyed Insurgency Sandstorm as much as any multiplayer game released this year. And that’s before the full-fat ranked competitive play kicks off at launch, offering a longer-form experience for those unsatisfied by a few rounds blasting AI waves in co-op. Its class system feels perhaps a touch under-developed at launch, with no huge incentive on anyone to pick anything other than Rifleman and run around squeezing the trigger, where conversely even the ultimate run-and-gunner Black Ops 4 successfully incentivised class experimentation this year. However, even on a server full of Riflemen, Insurgency: Sandstorm’s qualities sing out across the desert flats, sandbagged checkpoints and blood-flecked streets.