It's not a boss fight if the boss doesn't know how to fight. 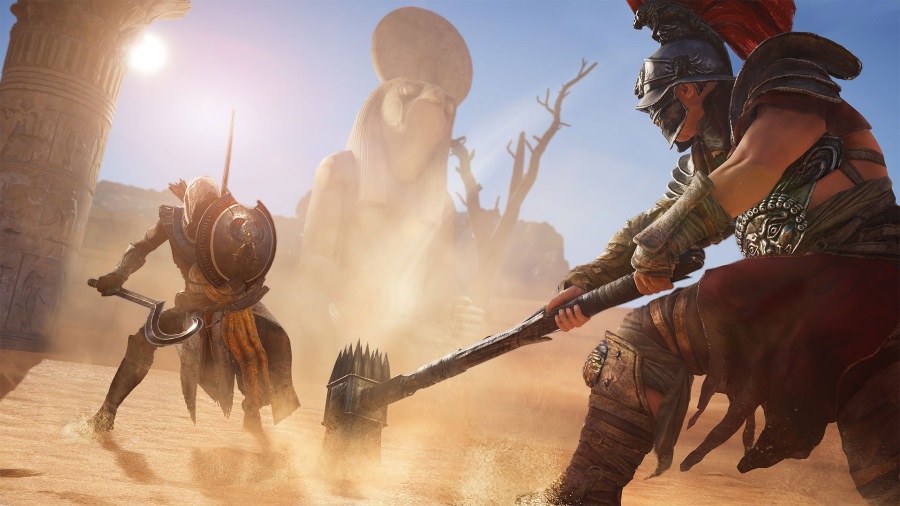 "There's a real ebb and flow to the combat in the Gladiator Arena. Taking on three waves of increasingly better equipped and aggressive opponents was a real thrill."

I've always enjoyed the combat in Assassin's Creed games, even when that kind of defeats the purpose of being an assassin. I know an agent for a secret society shouldn't run around in broad daylight chopping people down in the streets. But these pigs strutting around in their spotless uniforms, enforcing draconian laws and intimidating my people sometimes need a correcting hand. Preferably a hand with a hidden blade attached. The next thing you know someone has screamed for help and there's a whole mob of fascists bearing down on me. Despite my initial bravado it's goodnight Vienna.

Fortunately for me Assassin's Creed Origins features special combat arenas designed purely for violent dust-ups. Want to boil up some blood? Head over to a Gladiator Arena and start choppin'.

Gladiator Arenas aren't just there for the hell of it. The first arena opens up as part of a main quest in the campaign with hero Bayek seeking out a target, but after that they are completely optional. As well as an excuse to show off Origins' overhauled combat system, Arenas are one of the places to go to earn Legendary weapons and unlock new outfits that can be used in the campaign. With Origins introducing loot they seem like the ideal spot to get something better than Common or Rare gear.

About that new combat system; it's supposedly built around weapon hitboxes, meaning you need to consider positioning, timing and pushing the advantage more so than in previous games. I'm not entirely convinced as it's still not possible to cancel a combo mid-way through if you've messed up your timing. I found it frustrating that Bayek was carrying out a pointless attack on an enemy that had already dodged. Punish me for mistiming my attack by all means, but it breaks the illusion when Bayek is obliviously swinging at fresh air.

Outside of the combos Bayek feels nimble and able to roll, evade and back out of trouble, as well as chip away at enemies, pressure them with a series of attacks and leap in for a massive strike should the opportunity open up. I felt a real ebb and flow to the combat in the Gladiator Arena, taking on three waves of increasingly better equipped and aggressive opponents. It was a challenge and a thrill. Build up a number of successful attacks and parries and you'll be able to kick off the adrenaline meter's Fury mode for a devastating set-piece attack too. 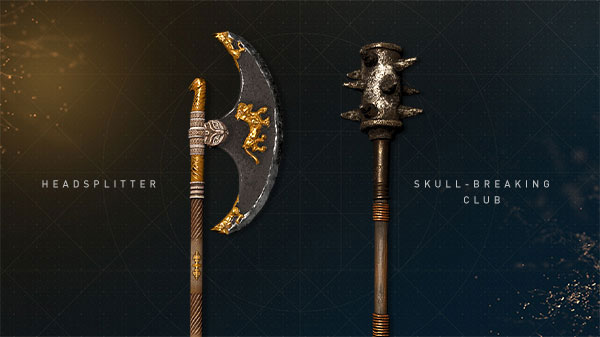 Origins is also bringing more weapon variety to combat, with the long-reach of a spear, sarissa or great axe feeling like a particular advantage. Each weapon has it own characteristics - some will be better suited to breaking open shield defenses, some stun enemies, others knock them to the ground. As added danger there are traps in arenas - in this case rotating spiked poles that gash anyone getting close.

After I'd defeated three waves of enemies I had to take on the boss - a slaver with a long reach. It started out tough and I took a couple of nasty blows to begin with, but then realised I could exploit the ropey AI easily.

I originally moved around to position a rotating spike between me and the slaver in order to catch a breath and observe his movement. To my surprise the slaver decided to rush me, ignoring the fact that there was a lethal obstacle between us, and ploughed head-on into the spikes. 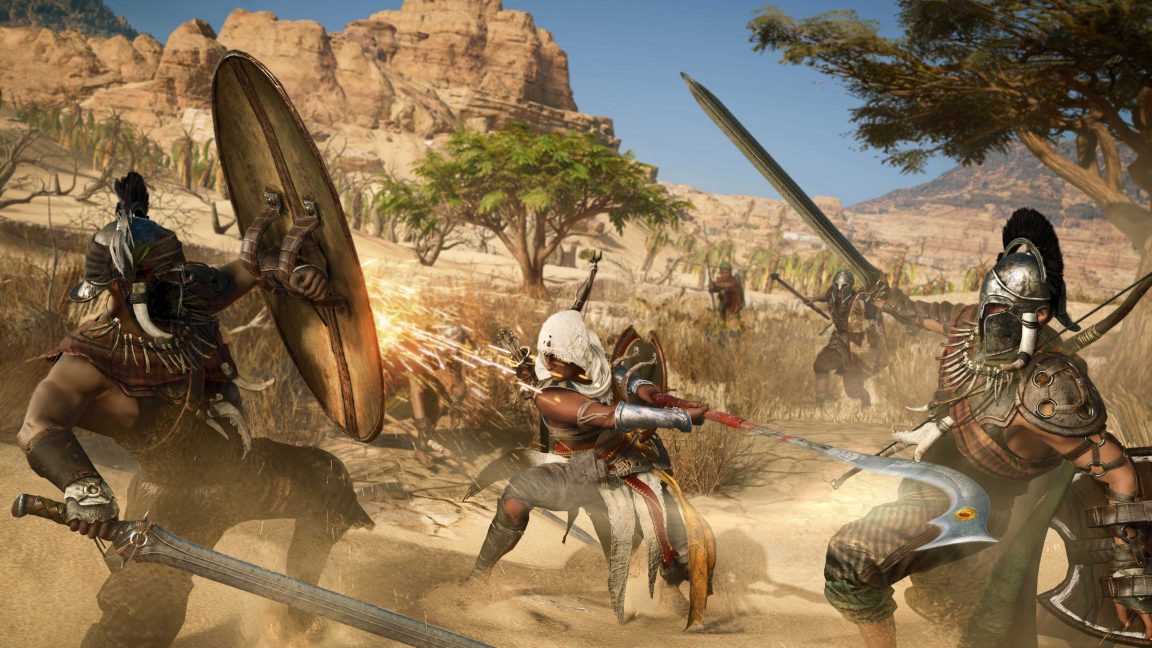 "To my surprise the slaver decided to rush me, ignoring the fact that there was a lethal obstacle between us, and ploughed head-on into the spikes."

The pole shattered with the force of the slaver's rush, but not before cutting his health bar down significantly. Because there were more traps on the arena floor, I just moved around to do the same thing again. Three times and the slaver's health bar was in a weakened state. I hadn't even connected a single blow at this point but it didn't take much to finish him off with my axe.

Once his health bar was empty I had the option to kill him or show mercy. Frankly, he deserved everything he got for his own stupidity. And who enters a gladiatorial fight to take prisoners anyway? Not me. He got a mouth full of broken spikes.

So it felt like a cheap win. I'm hopeful this sort of AI problem is fixed before the game is released in October, because my brief battle in the Gladiator Arena felt good up to that point. Boss fights need to be tough but fair, and that means fair for the AI, not just the player. Otherwise some of Assassin's Creed Origins' Legendary weapons and loot aren't going to be a challenge to unlock at all.