It looks like what appears to be a Dying Light 2 Collecter's Edition has leaked via a European retailer, suggesting the game may be coming soon after all.

Dying Light 2 developer Techland had promised, very recently, that it will share some “exciting news” on the game “soon.” But a listing that was uploaded by a retailer in the Czech Republic (image below), we may have seen more than we were supposed to at this stage of the game's marketing campaign.

The supposed Collector's Edition of the game (thanks, Resetera) comes with a variety of extras including a steelbook case, an art book, a flashlight, and some stickers as well as a statue showing what appears to be the game’s protagonist leaping off a lamppost in order to whack a zombie in the skull. Nice.

Techland has not officially revealed this item yet, so take its existence with a pinch of salt. That said, it's a pretty specific and realistic thing to mock-up for the purposes of a hoax, so it's likely this is indeed a legit leak.

The fact we've got an asset like this mocked up, though, would suggest we are at least going to get a release date confirmation soon. That "exciting news" the developer promised at the start of the year? It looks like we're going to be hearing about it soon.

Dying Light 2 was originally slated to be released in spring 2020, but last year around this time, the game was delayed by Techland.

The game is in development for PC, PS4, and Xbox One. It was also one of the first cross-gen games to be officially announced, so will also be able to pick it up for PS5 and Xbox Series X/S. 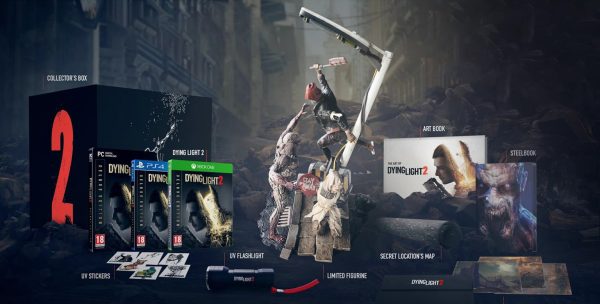