Blizzard will continue to add mission content to Hearthstone and skip Adventures into 2018.

Hearthstone players won't dive into new Adventures with the next expansion Kobolds and Catacombs, nor in the foreseeable future.

One reason, according to art director Ben Thompson, was that cards included in Adventures were gated, meaning if players didn't delve into the content, they didn't receive the cards which "sucks" for the player.

Another reason was complexity of the Adventures, which tended to be less of a challenge for more experienced players.

"With Adventures, we were somewhat fettered by the fact there were cards we needed to get out there, we wanted to add those 30-plus cards to the meta, but we couldn't gate those from players based on experience," Thompson told Metabomb. "If they didn't complete the Adventure and they don't get those cards, that sucks.

"We needed to tone down the complexity of the Adventures, and as a result they were less challenging for the more experienced players - and we certainly got that feedback." 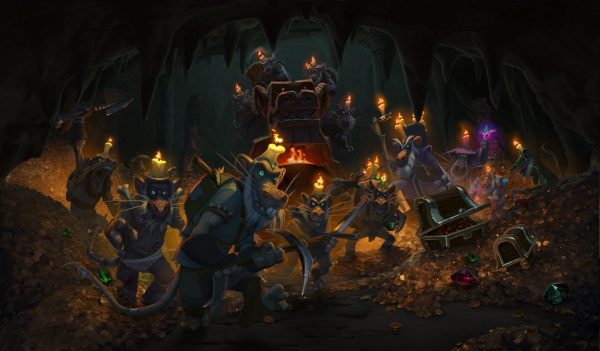 Thompson's comments on Adventures basically reiterate what was announced in February, but provides players with a solid reason behind the decision.

With the next Hearthstone expansion Kobolds and Catacombs, experienced players will find the Dungeon Run aspect will find plenty of challenges, and the more causal player will find zero gated content behind it. This will ensure there's something for every type of player.

The only "gated" content in Kobolds and Catacombs is the card back for beating all nine heroes.

For this reason, according to Thompson, three full releases with mission content will remain a "big part" of how the game will be developed going forward. The company stated as much when Journey to Un’Goro was announced as the first release for the Year of the Mammoth.

Released in April, the content was followed by Knights of the Frozen Throne in August. The final Year of the Mammoth content pack for Hearthstone, Kobolds and Catacombs, releases in December.