Legendary weapons in Destiny 2 are much easier to come by than Exotic weapons, especially once you kick off the grind beyond level 20.

You can only have one Exotic weapon equipped at a time in Destiny 2. On the other hand, you can have as many Legendaries equipped as you want. For this reason, Legendary weapons are often more practical. They are the second highest tier of weapons in Destiny 2, and they come from many sources. We've rounded up a few of the standout options for PvE that we'd recommend.

Make sure to check out the full Destiny 2 guide for all your other needs. Whether they be weapons, armour, levelling up tips, secrets guide, or anything in between.

Before your read on, just remember that although the perks on Legendary weapons do not change from one drop to another, their power levels, and elements in the case of Energy Weapons, most definitely do.

Because of this, you may find a weaker version of the same weapon early on that will be outclassed by what you find later in the game. With the help of our weapon infusion tips, you can bring the old gear to your current Power level. It's a good idea to keep hold of them just in case you don't get better versions later. 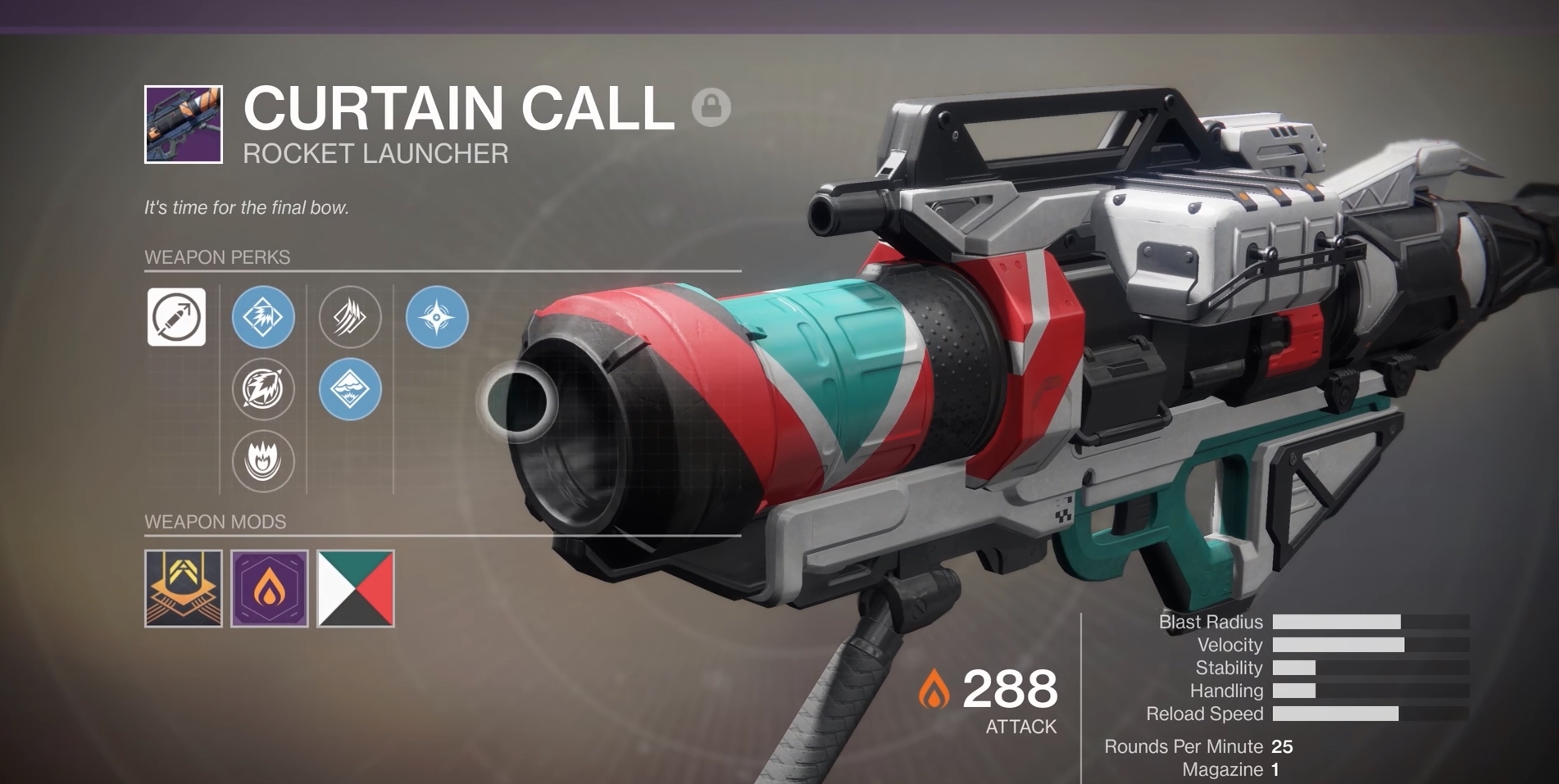 This is a Vanguard Power Weapon, meaning you're more likely to find it in reward packages from Zavala. Its intrinsic perk is called Aggressive Frame and it allows the weapon to do great damage but comes with an increase to recoil. This isn't much of an issue, though, seeing as you can only fire one rocket at a time.

As with most weapons, you have three perk columns. The first one gives you the choice between:

In the second perk column, you have two choices:

The default trait in the final column is Cluster Bomb, which spawns smaller cluster bombs with every rocket hit, further enhances the damage the weapon does. 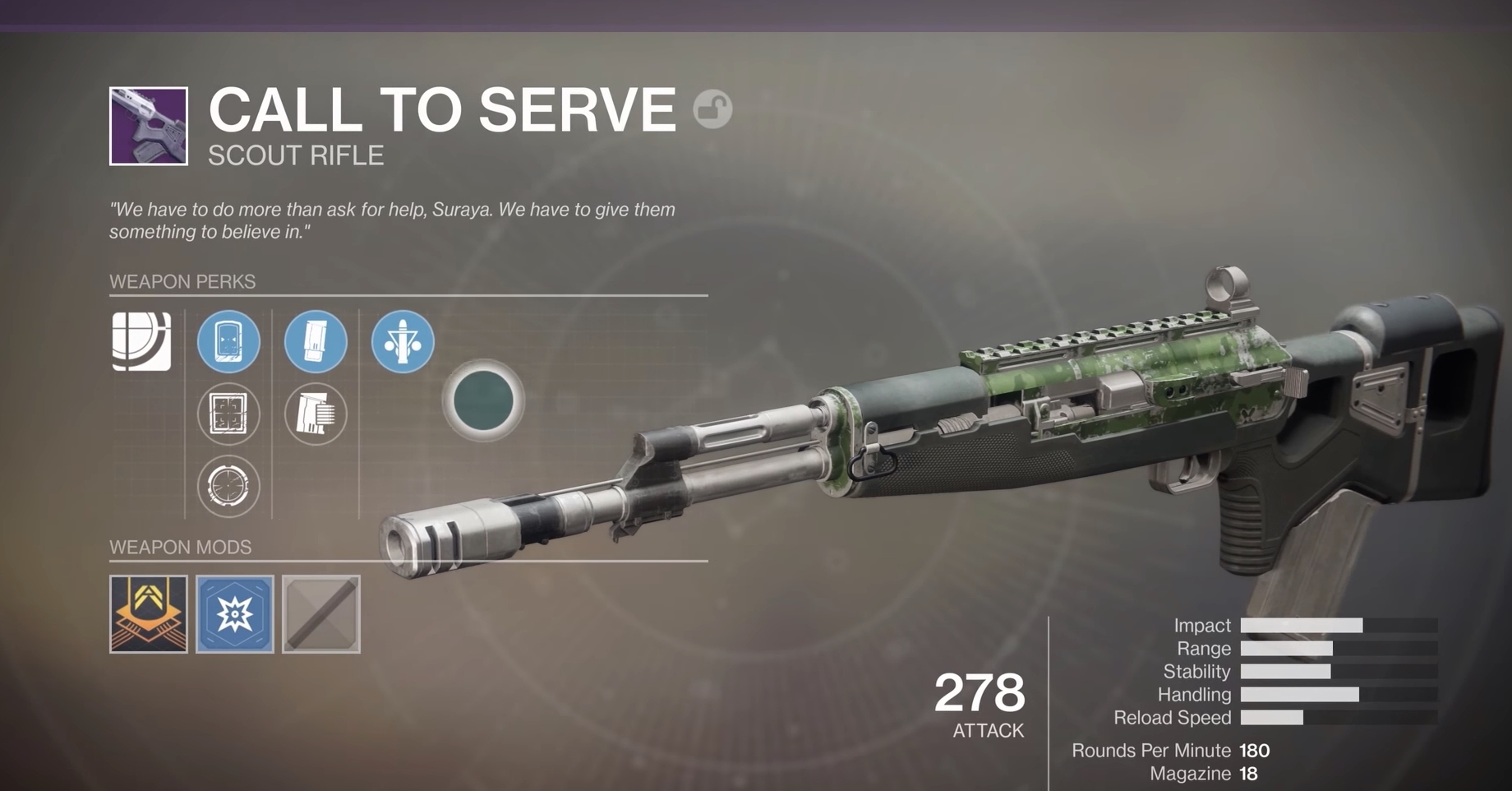 Call to Serve has high impact, and is an all-around solid weapon. You can earn it in EDZ packages, which are earned every time you reach a new reputation level with Devrim Kay.

The weapon's intrinsic perk is Precision Frame, which makes the recoil pattern follow a more predictable vertical kick. In the first column, you can choose from three different sights:

The second column gives you the choice between two magazine options:

Finally, Call to Serve has the Triple Tap trait, which returns one round to the magazine when you land precision hits (headshots, crits) one after another in quick succession. Although the reload speed may be slow if you opt for the Extended Mag, this is an excellent scout rifle, especially when dealing with big targets and fearsome bosses. 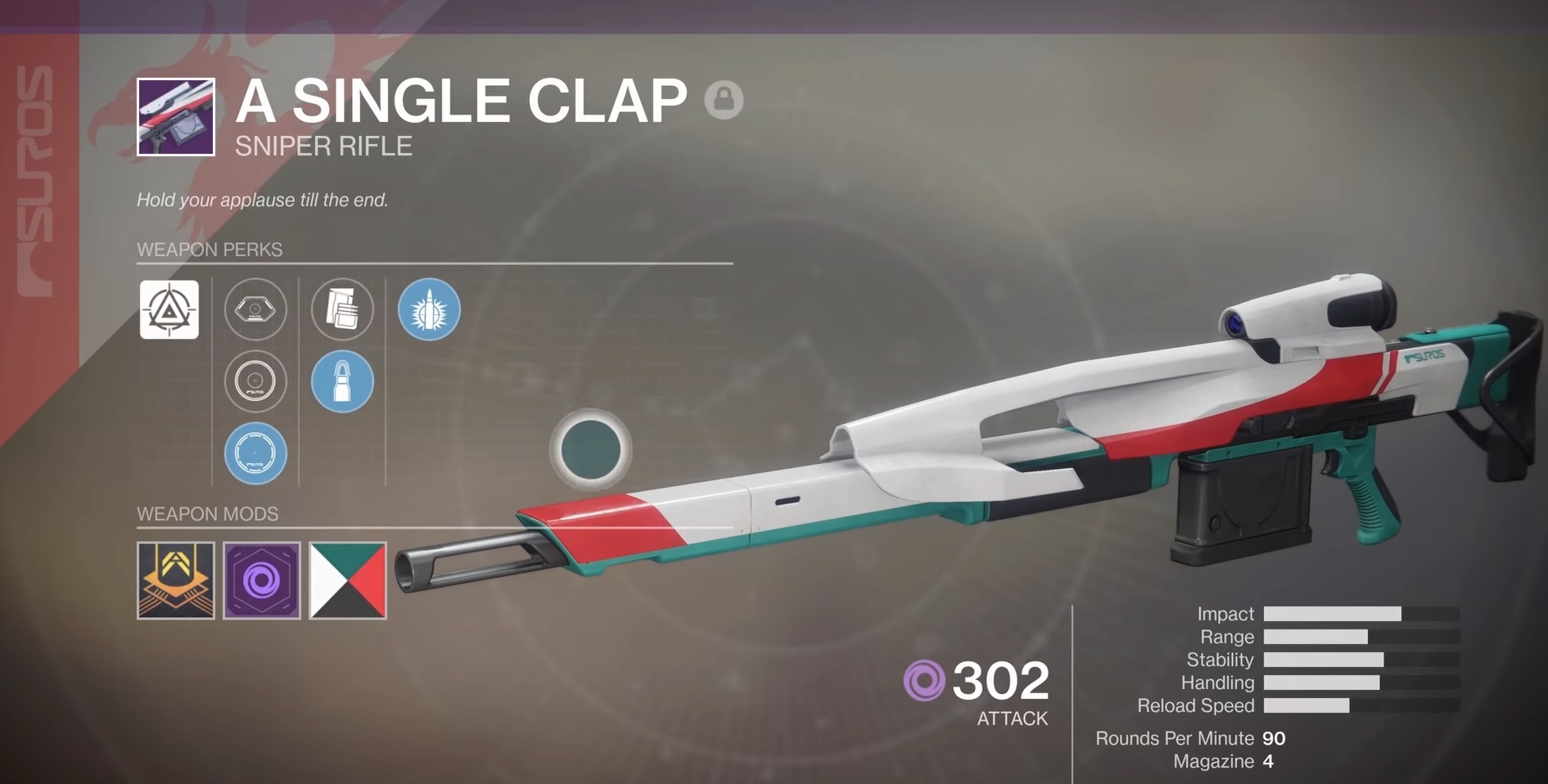 A Single Clap is a Power Weapon you could get from Gunsmith reward packages, and it's one of the highest impact sniper rifles in the game today. It only has four rounds in the magazine, but you can offset this by using the Titan's Rally Barricade class ability, or the Hunter's dodge reload to instantly refill the magazine and continue firing.

Adaptive Frame is the intrinsic perk here, which offers a sturdy grip. The first column has three different optic choices:

You also have two magazine options: 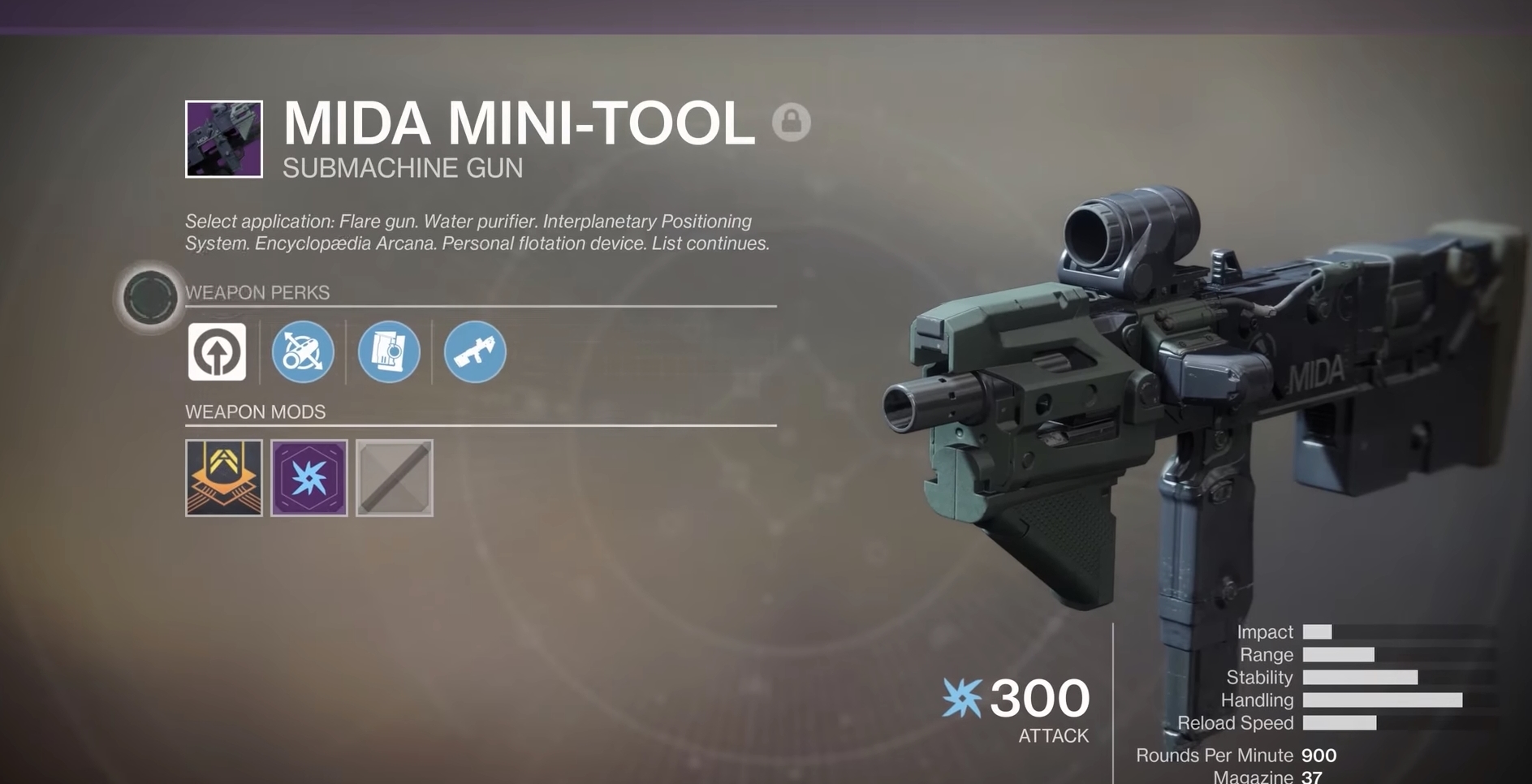 MIDA Mini-Tool is one of the best Energy Weapons in the game right now. You get it as part of an EDZ World Quest.

The intrinsic perk is Lightweight Frame, which increases movement speed when the weapon is equipped. The rest of the perks don't offer any choices.

Starting with Fluted Barrel, this one greatly increases handling speed, and slightly increases stability. Alloy Magazine increases the reload speed when the gun is empty. Finally, you have MIDA Synergy, which grants another speed benefit when the MIDA Multi-Tool Exotic is also equipped. 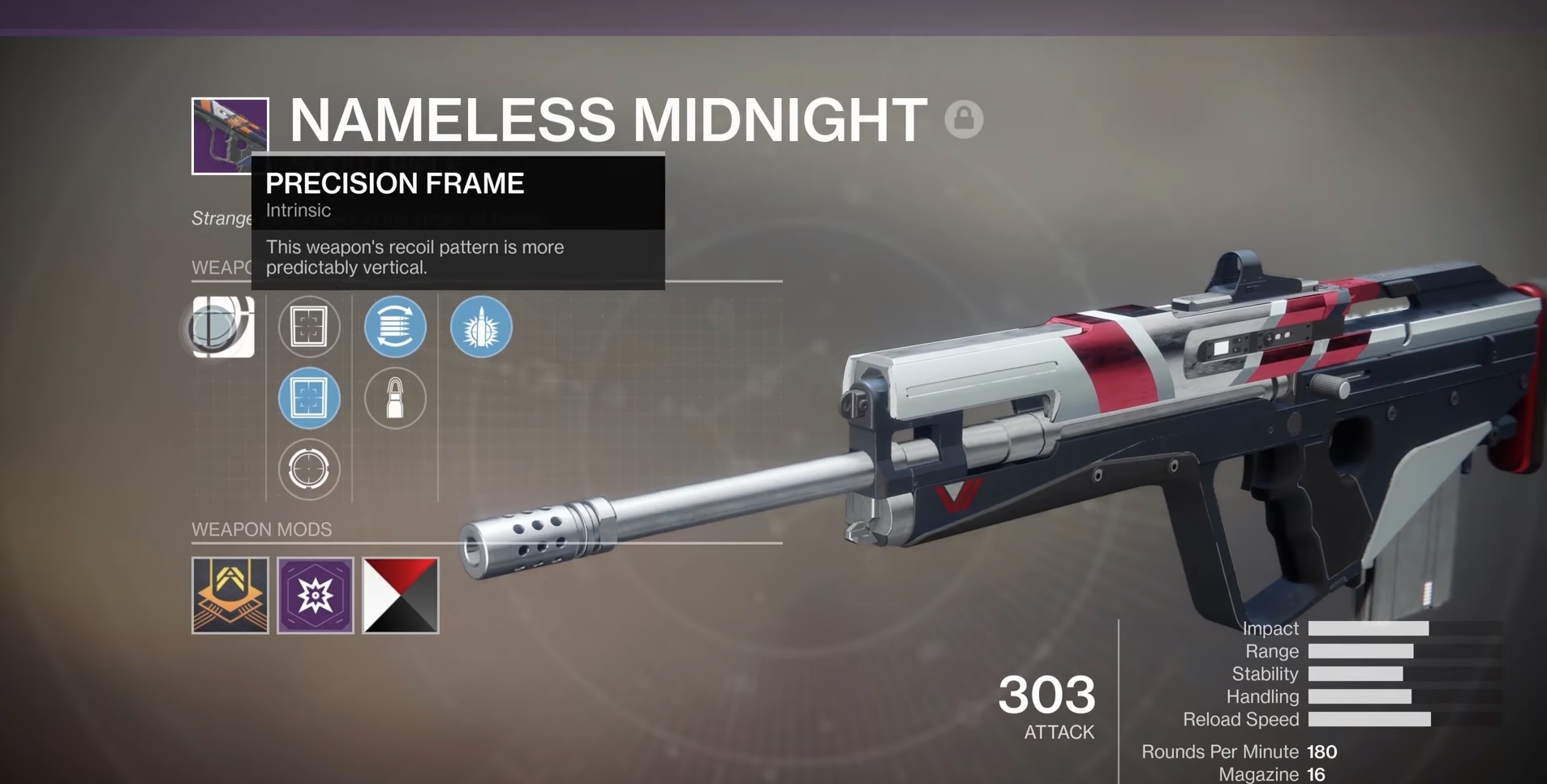 You probably guessed that you'd see Nameless Midnight on this list. This Kinetic scout rifle is one of the best weapons in the game. It's a Vanguard weapon, so expect to see it in reward packages from Zavala. You may even get it when you finish your first Nightfall if you choose to, so it's not hard to come by.

Precision Frame is once again the intrinsic perk, for a more predictably vertical recoil pattern. You can pick from three optic options in the first column:

Magazines come in the second column, with two available choices:

Explosive Payload is the trait on Nameless Midnight, which allow rounds to create an are-of-effect detonation on impact.

Outside of the top five, there are a couple of other weapons you should definitely not dismiss.

What are your favourite Legendaries for PvE?