I was worried about Concrete Genie’s depiction of bullying until the main character was pushed to the ground and hit hard in the gut.

That probably makes me sound sick in the head, but up until that point the bullying had been pretty soft. Then came a THUD. It’s a sudden moment of violence that drastically shifts the tone of the game. This is serious.

The kid being bullied is a teenage artist called Ash. He’s trying to rejuvenate Denska, his dilapidated seaside hometown, by covering the walls with colourful street art. Using a magical paintbrush he finds early in the game, he’s able to literally bring his paintings to life - except it’s me who’s doing the painting, every stroke and splat. Using my actual hand movements, I have the freedom to tailor compositions to my taste when applying paint to the walls. 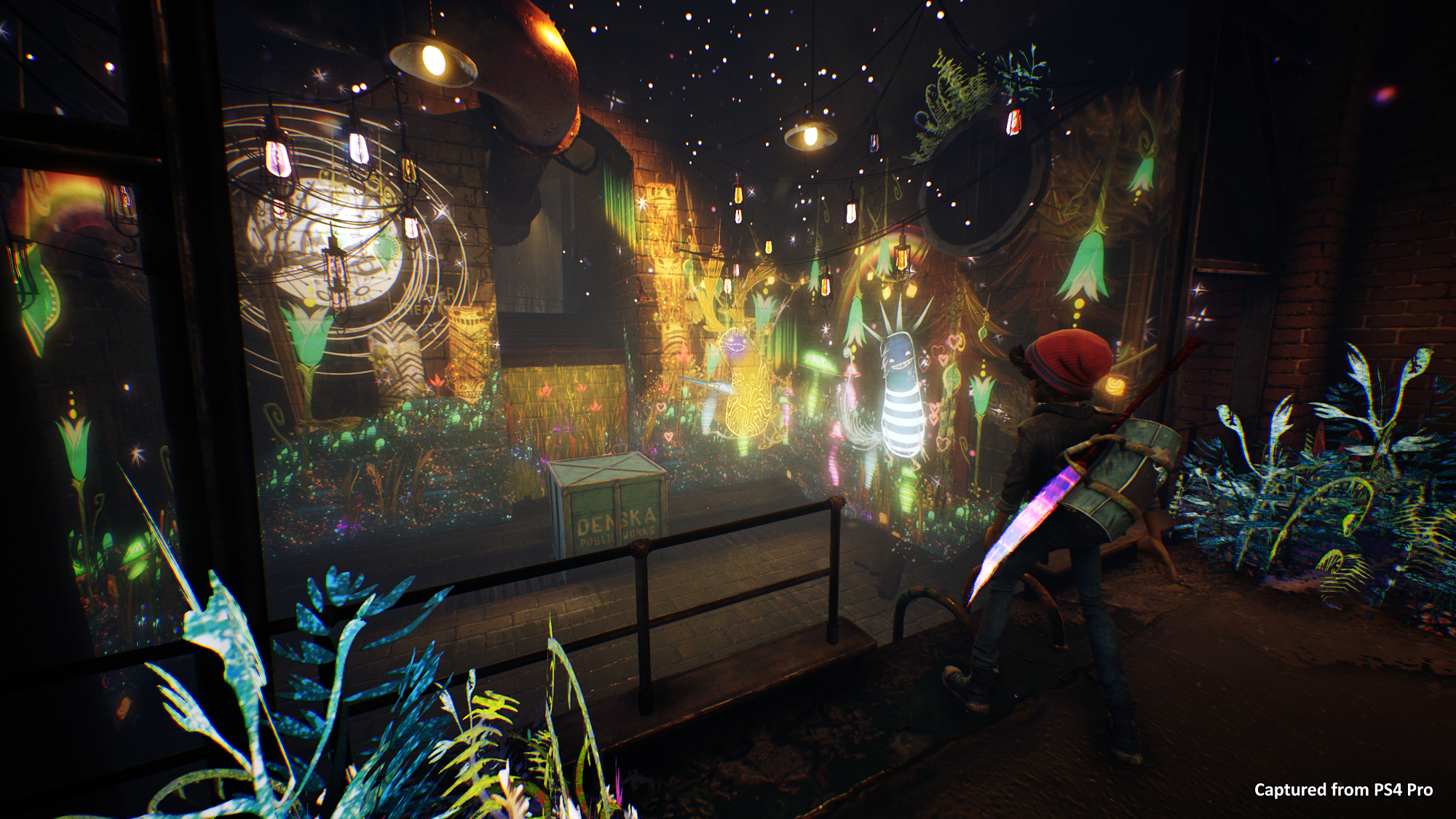 I’m able to select stars, aurora, trees, daffodils, grass - elements from a whole bucolic landscape. Then I hold down R2 while tilting the PS4 controller to draw lines across the grotty canvases that sprout seeds, branches, and lights in the sky. It all grows rapidly in front of me and then calmly sways in an imaginary breeze. For a moment I forget I’m painting on the salty bricks of a defunct sardine factory.

This is the third and final iteration of Concrete Genie’s painting mechanics. “It was very stressful getting them to that point,” PixelOpus’s creative director Dominic Robilliard tells me. “Mainly because they've turned out to be so critical to the theme, the story, everything - they're the linchpin of the whole formula working.” The idea is for you to feel the same sense of ownership over each painting as Ash does. Because of this, when the bullies start ruining them, you get as upset as he does.

That’s why it’s vital that paintings have a hand-authored feel. But it requires a careful balance that PixelOpus took a while to figure out. The controls have to allow enough freedom for creativity but, at the same time, always be intuitive. “The moment we over-assist, you stop feeling like it's your artwork,” Robilliard reasons. The team’s first trial with the painting mechanics involved splotches that you chucked at the walls and then filled with faces. “That wasn't working because you just didn't feel connected to it enough,” Robilliard says. 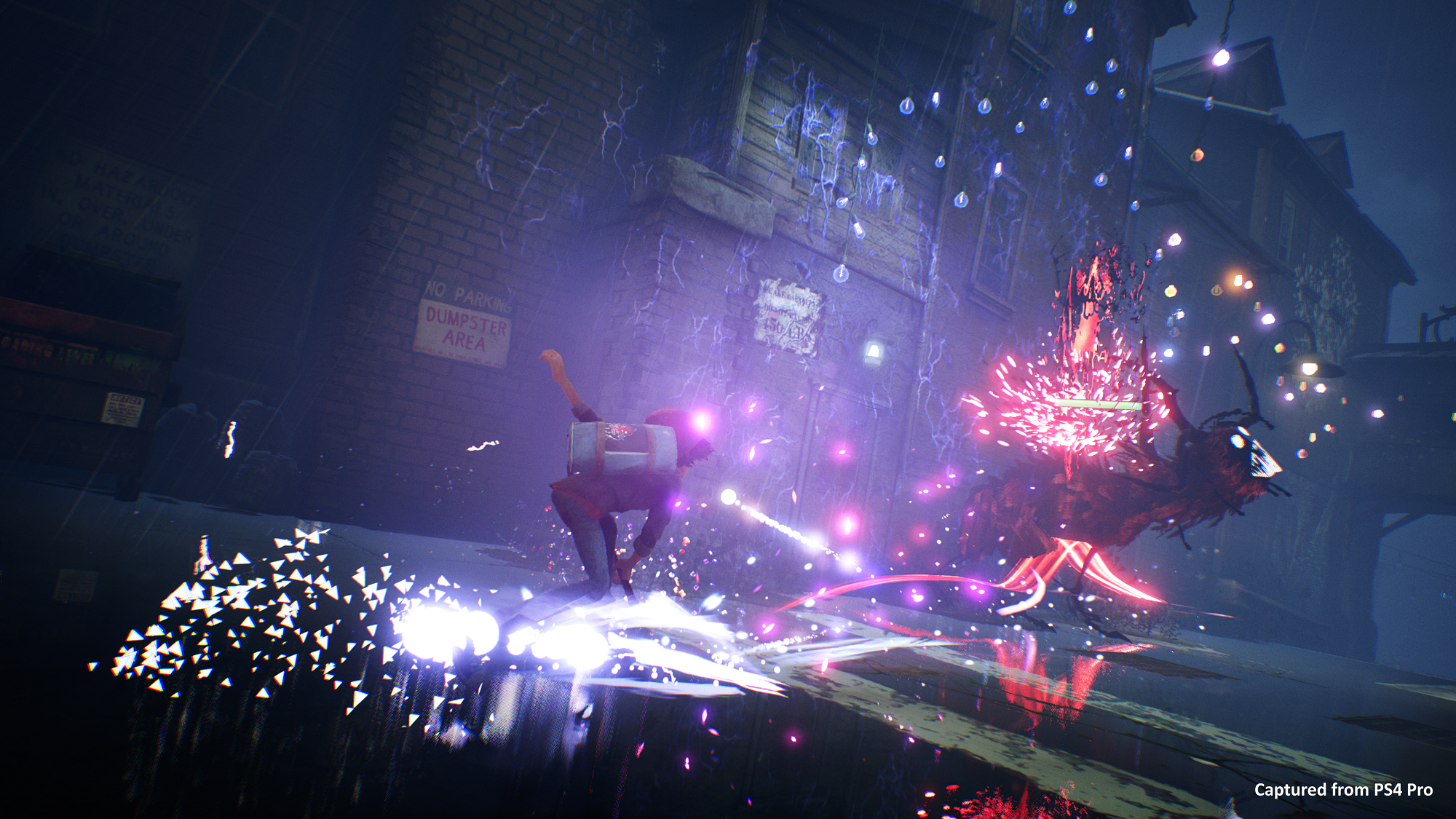 Next they tried stencils that you selected and then painted over to get the desired shape. Art director Jeff Sangalli says these worked “fine” but he wasn’t happy enough with the result. The solution came after asking the team’s twin artists, Becky and Lucie Roberts, to use their skills in traditional animation to reimagine the painting mechanics. “They did this pre-visualisation where trees were coming to life - I wish I could show you - and grass was growing,” Sangalli gleefully recalls. “I was just like 'oh my, we've gotta try to achieve this'.”

Now, not only do your own hand movements directly conduct nature’s forces, you can detail curly horns and spiky antlers on small monsters known as genies. “How you paint the creatures affects their personalities,” Sangalli explains. It’s seeing these creatures come to life in the image I give them that has me invest the level of emotion into my paintings that the developers want me to. The landscapes I paint are undeniably beautiful but they lack the character I need to really care about them.

One genie asks me to paint a campfire so they can warm up. Once it’s done rubbing its hands together, it asks for a field of flowers to run through - I oblige and watch its jaunt, pushing through the stalks in excitement. The genie then spots a basketball on the concrete outside of the painting and asks Ash to shoot it through a nearby hoop. He does so successfully, which triggers the two to celebrate with a high-five. I’m grinning from ear to ear.

While playing with genies like this makes them happy, it also serves a gameplay purpose, as a cheerful genie will help Ash out in return. I lure a joyful red genie over to some wooden boards that are nailed across a doorway, where it breathes fire so that the blockade falls away. Only red genies can do this, as the yellow ones have electrical properties, and blue genies control the wind. Something every genie can do, however, is give you super paint. Armed with this extra colourful, amped-up paint, you can erase the oily graffiti that stops you painting on certain walls and completing an area.

But it’s not quite as easy as that to progress. At times you’ll have to dodge the gang of bullies while trying to splash your revitalising art over the walls. It’s easy enough as you can whistle to distract them, then climb to the rooftops and drop down on the other side, clearing the way for yourself. Even if they do catch up with you, they just snap your paintbrush and throw it on the floor. Pick up the paintbrush again and it fully restores so you can carry on.

It was this lack of consequence that made me question Concrete Genie’s portrayal of bullying at first. My fear was that it would downplay how hurtful it can be. This was partly due to metaphors becoming the predominant way for games to deal with serious issues. Take Papo & Yo for example, which is about an abusive, alcoholic father who’s represented by a fantastical animal with an addiction to eating frogs. It can be enjoyed for its artistry, but like many other games since, Papo & Yo buries its harsh subject beneath beauty and metaphor. 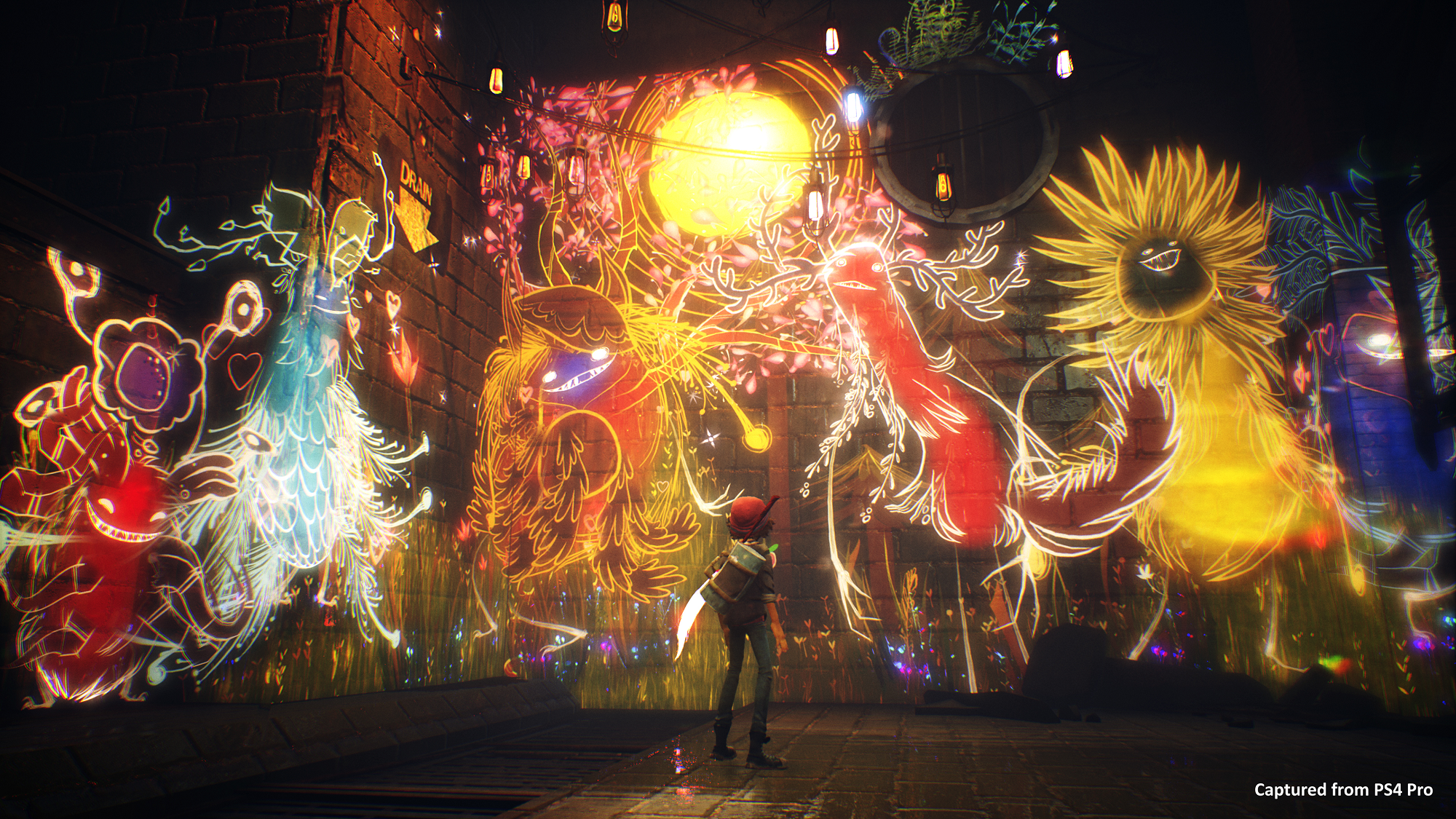 Initially, I had reason to believe that Concrete Genie would go down this route too. As it is, the darkness of the seaside village can be seen to represent Ash’s deteriorating mental health. His efforts to bring the colour back to the town could be a metaphor for how his creativity helps him deal with it. But he really is being bullied and you get to see that, and so I hoped that it’d be present for the game’s duration, reflecting the violent reality of bullying for victims and maybe helping them overcome it.

While I’m unsure which direction Concrete Genie will go, I am reassured by the fact that I’m not the first person to talk to the developers about their depiction of bullying. “We were at an event and a mom came up to us in tears, and it affected us pretty deeply, talking about her son who's being bullied at school and she felt like this game might help him in some way,” Sangalli tells me. “So it definitely made us go back to the office and put even more into the game itself, as much as we possibly can.”

It also helps that bullying is a personal subject for most of the team at PixelOpus. “One of the key moments at the beginning, when the sketchbook is ripped up, that is actually something that happened to our composer, Sam Marshall, when he was a kid,” Robilliard reveals. The Roberts twins also took from their personal lives to give the bullies in the game believable characteristics. I see this later in the game when some of the bullies start to question the violence they throw at Ash - no longer are they all nameless evil entities. PixelOpus want you to get to know these kids through their backstories, which explain how they became bullies in the first place. “We wanted to take a more optimistic perspective, that these kids weren't naturally bad,” Robilliard says. 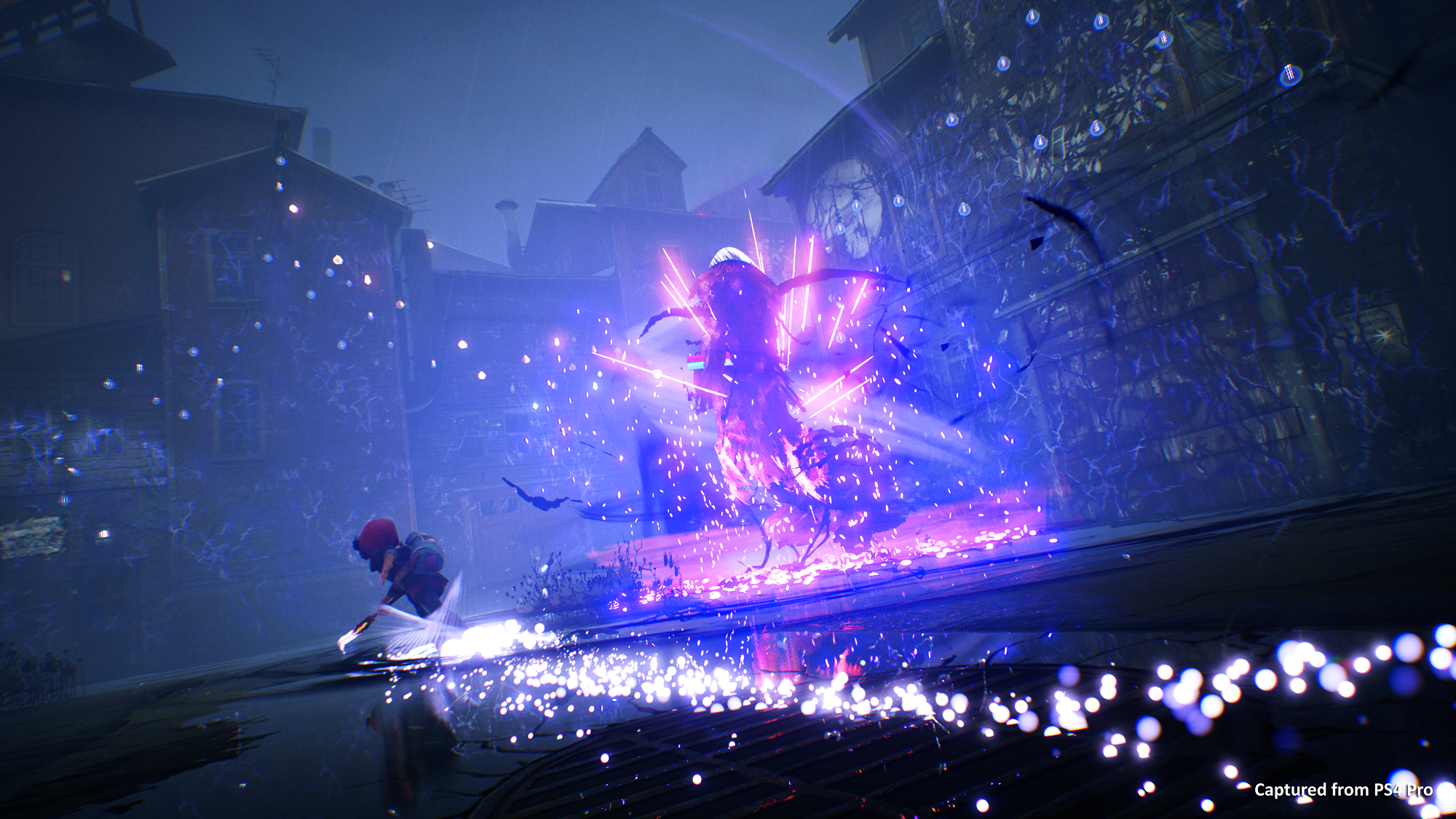 All of these are encouraging signs that Concrete Genie will offer a respectful treatment of bullying. There will be metaphors, but it also isn’t shying away from the very real hurt that bullying causes. Will it help people through it like that mother hoped for her son? It’s impossible for me to say. But it seems to offer a friendly space for both the victims and perpetrators of bullying to review how it affects their lives, and to think about how they might move beyond it.

Even if that’s not the case, what I am certain about is that Concrete Genie’s VR mode provides a place for everyone to heal and rejuvenate. It starts with me standing inside a cave, a paintbrush in one hand, a book in the other. I can select from stars and plants to paint with from the book and then apply them to the walls of the cave around me using the same hand-authored mechanics of the main game. A genie called Splotch helps out by telling me what to do and wiping the walls clean when I’ve completed each painting.

It’s delightful enough but then the walls drop - and so does my jaw. No longer am I painting on 2D surfaces. There’s a fully 3D meadow stretched out in front of me to decorate as I wish. I don’t just paint trees, I pull them out from the ground, steering the weaving branches into shape. Splotch grabs a few flowers and fashions them into a crown while I drape light bulbs across the trees. I can blow wind through reeds to create music, drag fireworks across the sky - Splotch looks up in awe - and shoot butterflies from the end of my brush.

It’s a magical space to be inside and there’s much more to it than what I got to see. Remarkably, the VR mode will be included with the main game at its humble price of £24.99 when it releases on October 9. I can’t wait to step back inside and cleanse my soul.