Blizzard might be one of gaming’s powerhouses, but it had modest beginnings.

Co-founder Mike Morhaime was studying electrical engineering at UCLA and when he met Allen Adham, another student who he became good friends with. The two of them, along with Frank Pearce, would go on to form Blizzard.

One day Adham and Morhaime were sitting in the computer lab when Adham had to print something off. In those days, the printer was on a different floor, so Adham locked his computer terminal and went off to retrieve his print out, leaving Morhaime alone in a room with a locked terminal.

“So now it's just me sitting alone with this locked computer terminal next to me, and I noticed that after ten minutes it unlocked,” Morhaime explained during his GameLab talk. “So, I did what probably all of you would've done - I relocked it, typed in a different password, find a new password. I wanted to pick something that I wouldn't forget because I figured I'd have to reveal it, and I wanted to pick something I'd never used before. So I picked 'joe'. J-O-E lowercase.

“Allen comes back five minutes later, sits down and when he types in his password it unlocks. So, I'm like, 'what happened?' So I said, 'Allen, how did you do that?' He said, 'Do what? I just typed in my password.' I said, 'What was your password?' He said, 'I'm not going to tell you that.' I said, 'Was it... "joe"?' He said, 'How did you know?' Anyway, we laughed for like a half an hour, we just couldn't believe that that had happened, and became very good friends.” 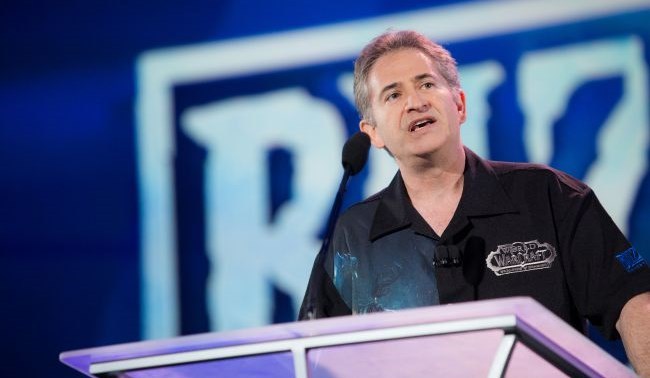 From there, Adham graduated from UCLA and Morhaime graduated six months later. Morhaime had a good job at a company called Western Digital, writing test software for their network cards. Adham went about trying to recruit Morhaime to start up a new business in video game development.

“I had no game development experience,” Morhaime remembered. “And Allen, basically he told me, 'Look, Mike, it's not rocket science. If we get some of our smart friends together, we can figure out how to do anything. We'll just find people that are passionate about making games, that are really smart, and we'll be able to compete with the best companies out there.' It's funny, so, I said, 'Why don't you come over, I want my dad to hear what you have to say.'

“Allen actually gave a whole pitch. And my dad said, 'You know, Mike, you got a great job at Western Digital. This sounds very risky.' And I also sought out other advice, one of my cousins said something different, and he said, 'Mike, you're young, you don't have a family yet, if it doesn't work out you can always get another job.' And so I ended up quitting the job at Western Digital and joining Allen and we started Silicon & Synapse. Allen had been friends with Frank Pearce from school. They had some classes together and they would always go after class to the arcade and play arcade games. And so when we started it was the three of us, Allen, Frank and I.”

The first day in the office was spent assembling flat pack desks the trio had bought on the cheap. The studio then went on the ship its first game, Lost Vikings.

We also spoke to Morhaime about his biggest regrets, which you can read at that link.