Black Ops 4’s beta kicks off tomorrow and keen-eyed players might notice some rather big changes to gunfeel.

Call of Duty might have changed over the years, but Black Ops 4 and its more tactical approach looks like it could be the biggest departure yet. Some of that transformation is thanks to the inclusion of the new battle royale mode called Blackout.

“One of the cool things [about Blackout] is it got people who were normally focused on the campaign into Blackout and playing PvP content,” Treyarch expert game designer Tony Flame explains of the development shift. “We’ve got a lot of talented people in the studio now focused on multiplayer combat, which has been awesome. We’ve got a lot of new perspectives, and a lot of that has helped drive the new gun mechanics.”

The first new gun mechanic is predictive recoil. Each weapon in Black Ops 4 behaves the same every time you fire, depending on how long you pull the trigger for or how many successive shots you pull off. Not only does this give the guns their own personality, it allows players to counter the recoil.

“I think they’re the best feeling weapons in the Call of Duty games - certainly the ones Treyarch has released,” Flame says. “We’re really proud of what we’ve done with the weapons - the feel, the look, the tuning, and the balance. A lot of that has been helped out by experimentation in the different modes, including Blackout. 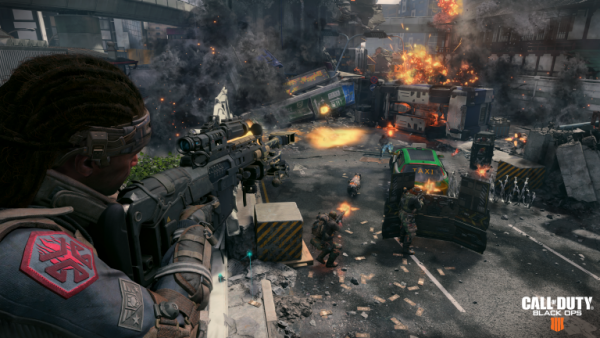 As well as this, some of the weapons now work on a ballistics system, where the bullet takes time to travel to the target, rather than impacting immediately with hitscan. This change was implemented thanks to Blackout, which uses a full ballistics model.

“With multiplayer, we’re experimenting with that in the beta - we’ve got kind of a mixed system there, what works best for what gun - so we’re going to see how that works,” Flame explains. “It really gives us an opportunity to balance some guns that we traditionally had trouble balancing in Call of Duty.

“For example, submachine guns have always been tough to get right because good players can do really well with them, even at a distance - so we’re utilising ballistics in the beta to counteract that and keep SMGs within their role in that close-to-mid-range engagement. At the longer range, ballistics kicks in and they’re a little harder to use. We’re really excited to see how that affects the meta and makes all of the guns feel good in their role.”

This ballistics model was originally introduced to make engagements feel right on the massive map of Blackout - a paradise for precision snipers.

“[Blackout] is in the same game so there’s going to be systems that cross over,” Flame continues. “Not every system is going to be exactly the same, but the flavour is definitely there. I was thinking of Blackout when [we were talking about] sniping because, as great as sniping is going to be in multiplayer, it’s going to be a whole other beast in Blackout.”

For more on the new Call of Duty - here's how Black Ops 4 is reinventing scorestreaks.