There’s a lot of grit and violence in Cyberpunk 2077, but one of its early Side Jobs – Happy Together – is a story of loss and friendship. You’ll probably come across it naturally as you descend the megatower down from V’s apartment, where you’ll see two cops banging on a door trying to coax someone out.

Speak to the cops outside your apartment, and they’ll introduce themselves as Petrova and Mendez. Ask them what’s going on, then ask if there’s anything you can do. 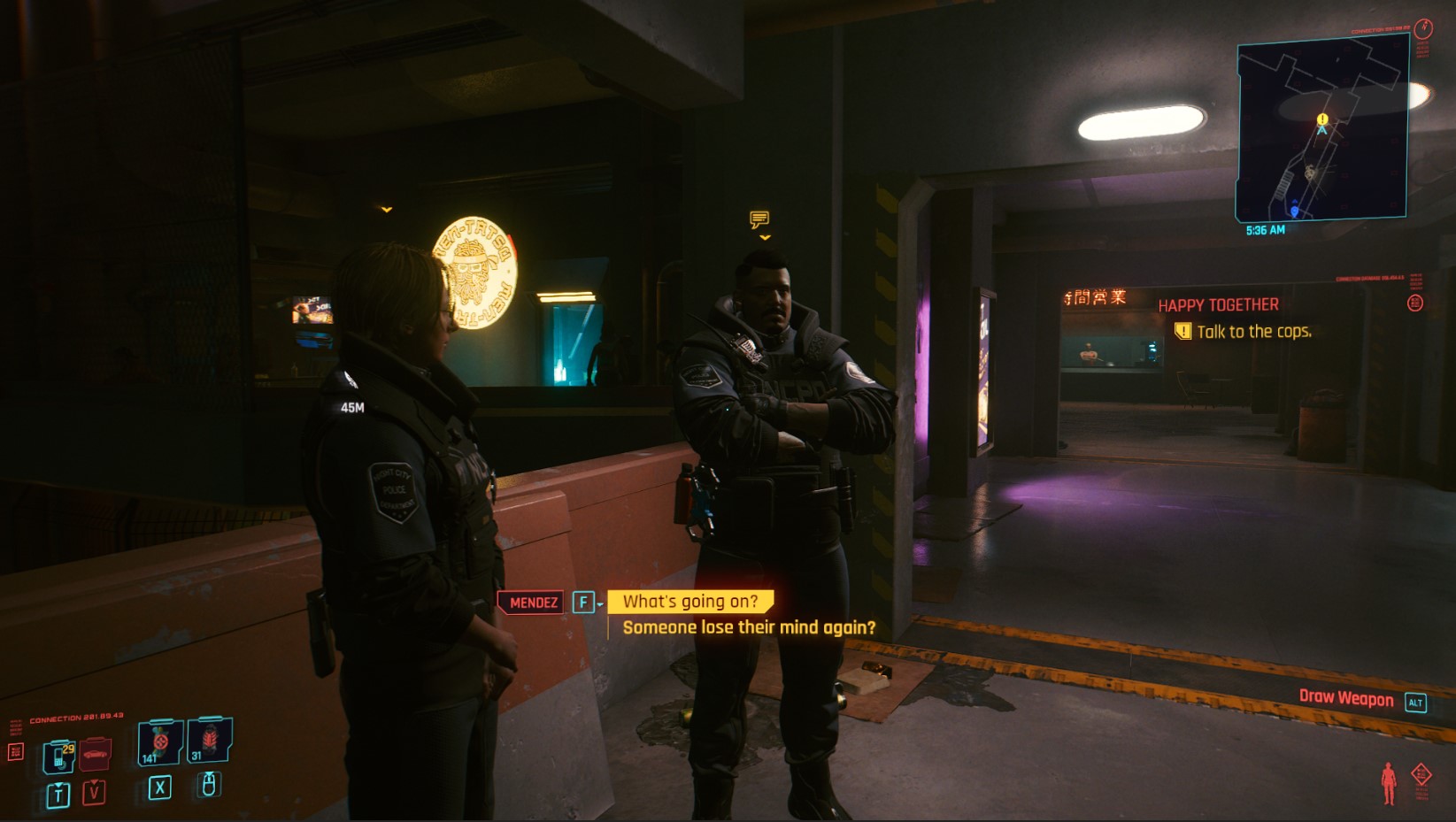 Petrova will level with you that their friend and ex-colleague, Barry, hasn’t been himself recently. He’s mentioned losing a dear friend, but has been reclusive for a while. Agree to check on Barry for Petrova and Mendez, then walk over to his house.

Knock on the door, but there won’t be an answer. Either go away and complete another quest somewhere else, or wait a few hours using you inventory menu.

Once it’s time to knock again, say it’s V and you’ll go into how you’ve met before. Eventually Barry will come to the door. 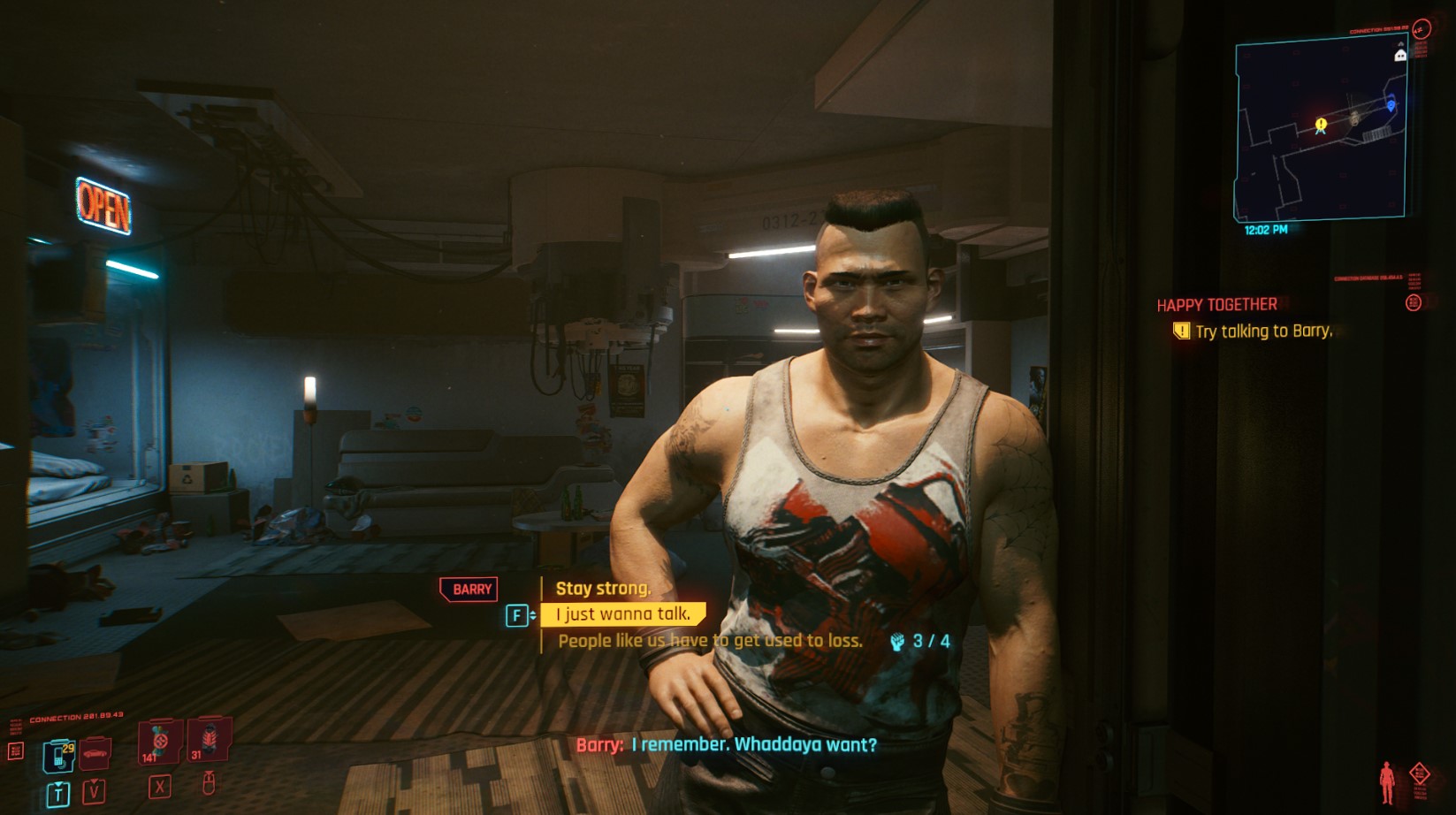 Say you want to talk and while he’s sceptical, he doesn’t slam the door in your face either. Let on that his friends sent you and reluctantly, he’ll invite you in.

Sit down on the table, and talk about his passed choom. It’ll turn out that Barry’s been feeling burnt out from the grim realities of a tough life in Night City, and his depression has been deepening since he lost a friend. When he’s tried to explain his feelings to his former colleagues, he feels like they just see him as weak. 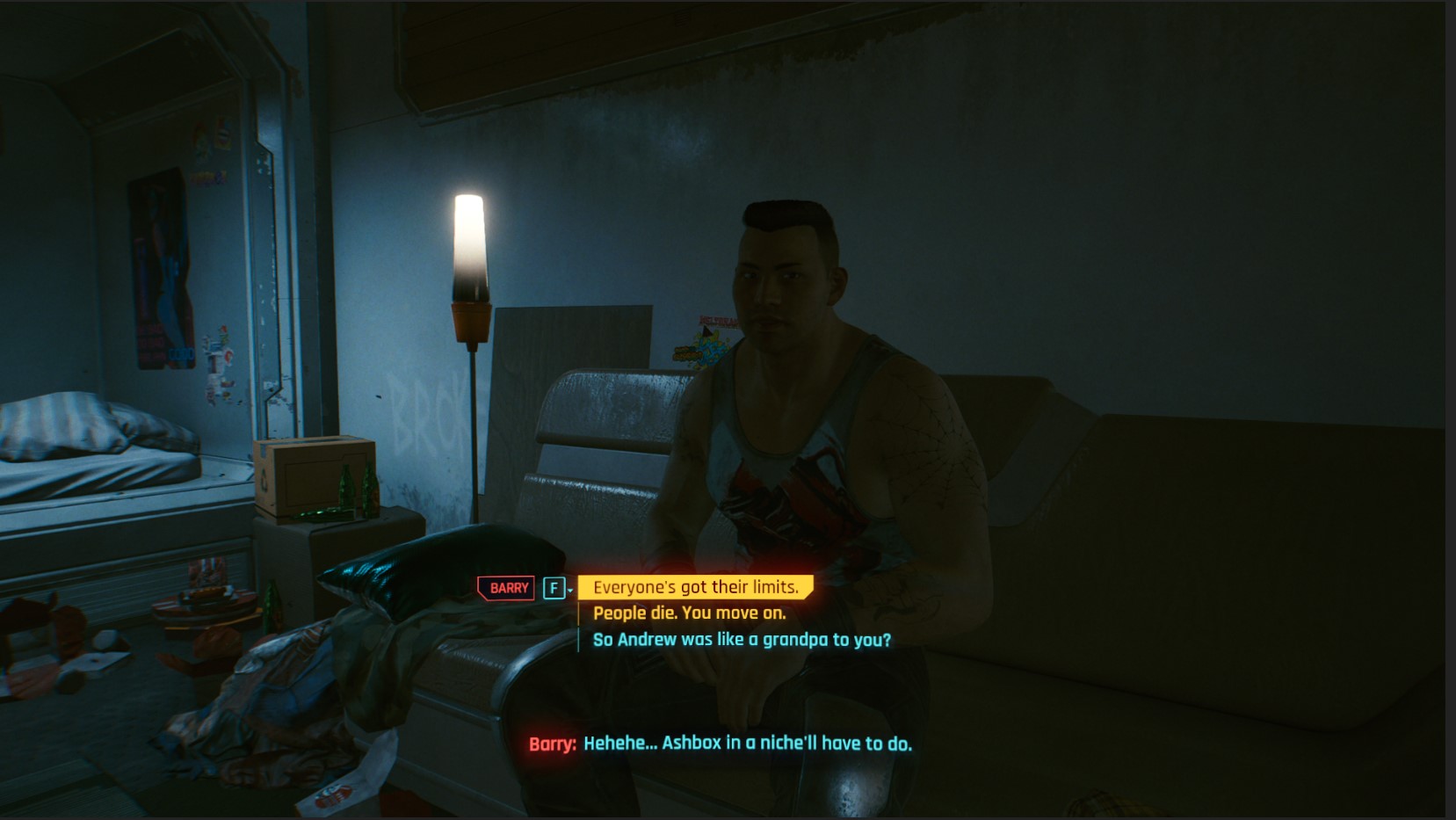 Continue the conversation as you wish, then say that everyone has their limits when Barry presses you on whether you think he’s right to feel the way he does.

With that, it’ll be time to stand up and leave with a new quest objective.

Where to find Andrew’s niche

Before speaking to Petrova and Mendez, you have the optional marker to “find Andrew’s niche”. To do this, you need to head out to the Night City graveyard.

First, take the elevator down to the ground floor, then hop in whatever vehicle you’re rocking.

You need to drive out across the water to North Oak in Westbrook. 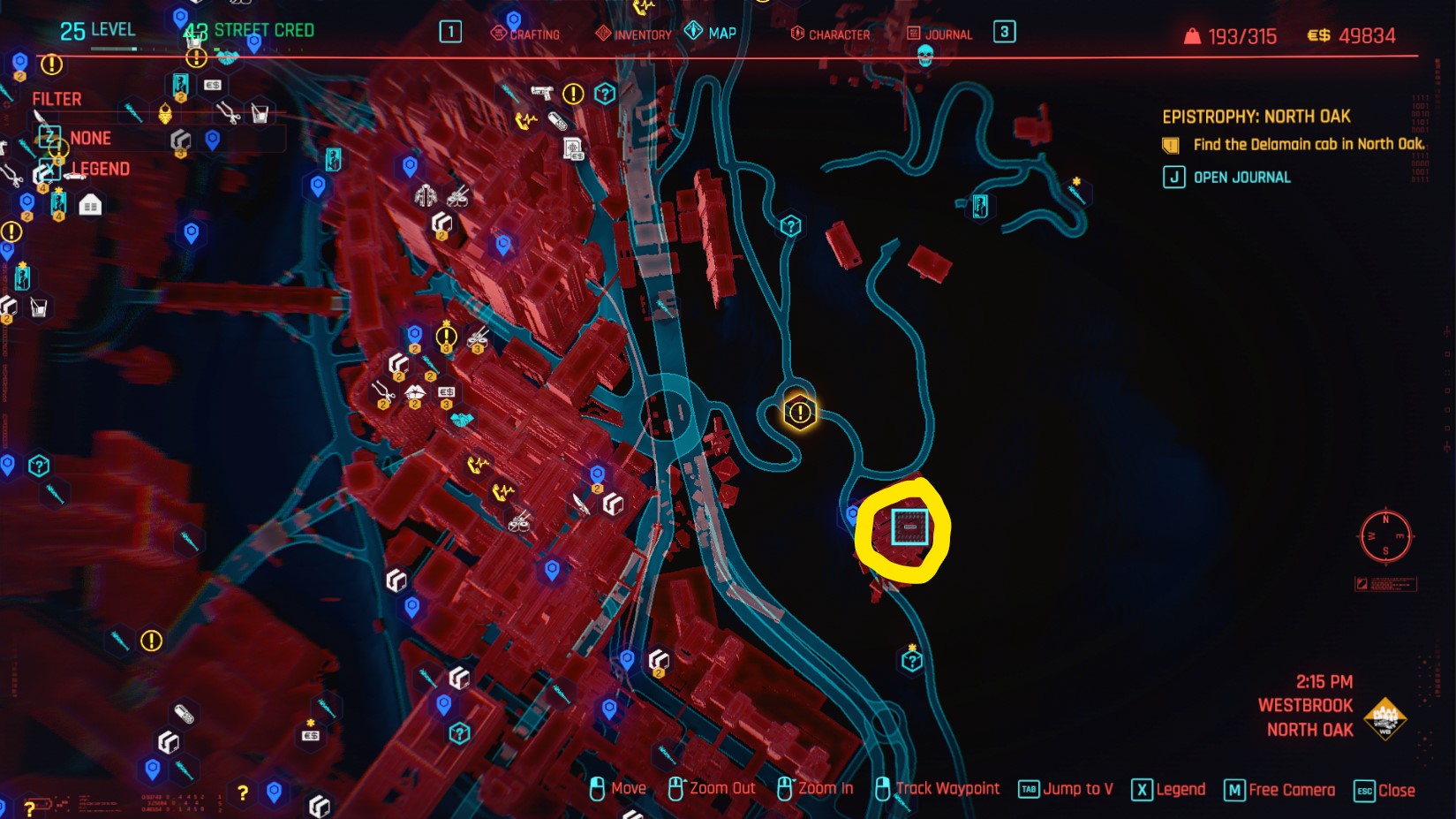 When you arrive at the marker, look at the screen in the top left of the highlighted area and you’ll find out that Barry needs a bit more help after all. 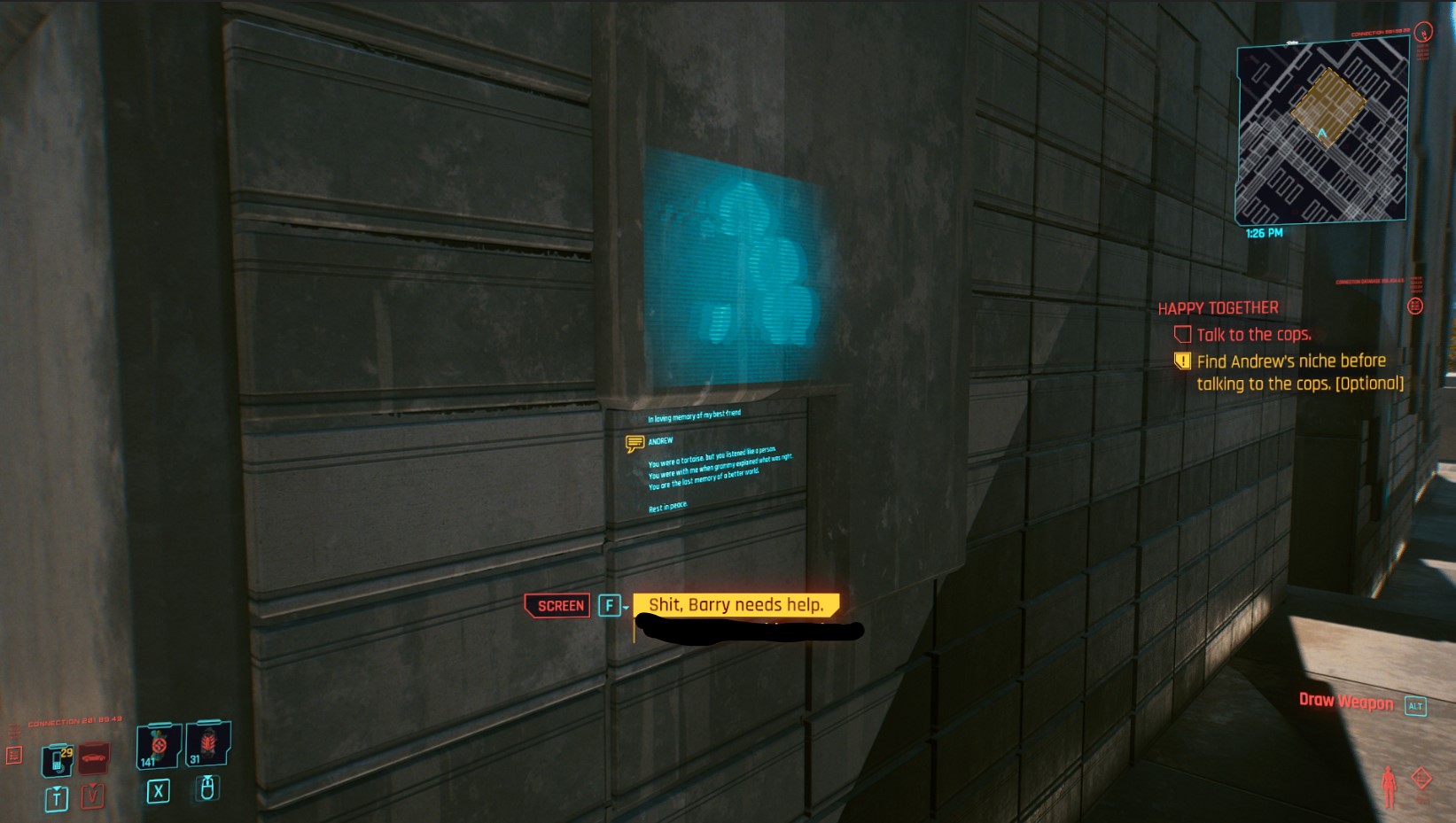 With some new insight into Barry’s mental state, head back to your megatower home to speak to the cops and meet them outside Barry’s apartment.

Ask what he said about the friend he lost, and they’ll say that they didn’t know much other than Barry really cared for them.

Tell Petrova and Mendez that you visited the grave, and quip back when they’re sceptical if you’ve got the cool to do so.

For a warm and fuzzy resolution to the quest, scold Mendez for bullying his friend and they’ll thank you for sorting things out. With more insight into how Barry feels, they’re more inclined to give him considerate support. 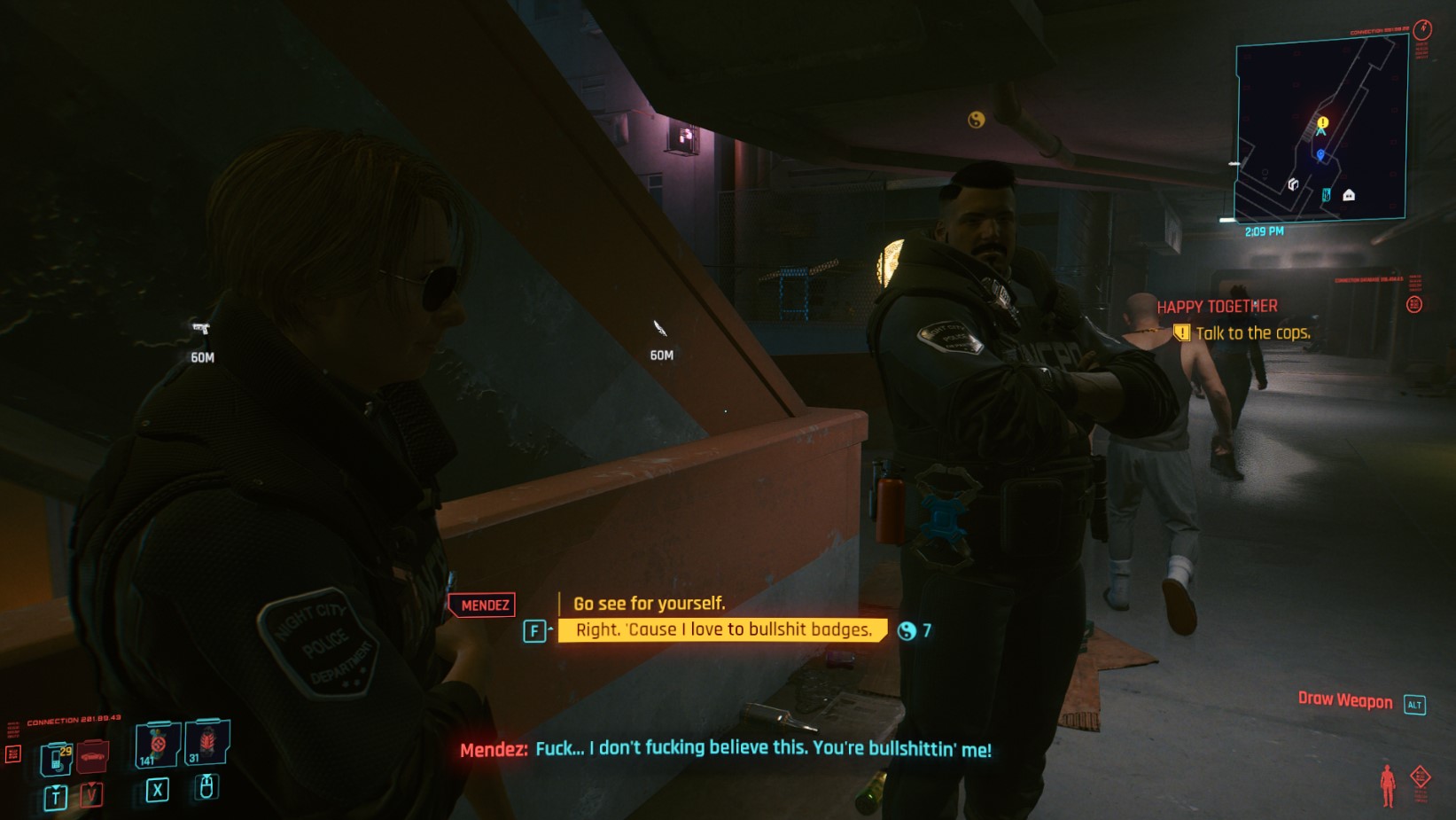 For completing Happy Together in this way, you get some eddies and street cred for your trouble.

Now that’s over with, you can move onto your main missions, like The Pickup and The Information.