There’s a whole lot of ways to get around in Cyberpunk 2077.

Cyberpunk 2077 is part traditional RPG, part open-world city roamer in the vein of Grand Theft Auto. That latter part means there’s a lot of vehicles on the streets.

To traverse Night City quickly and easily you can simply steal cars, motorcycles, or just about any other vehicle, exactly like in GTA – but there are downsides. For one, stealing any car requires a certain level of Body Attribute – a measurement of the strength needed to drag the owner from the driver’s seat.

On top of that, cars you steal aren’t really yours. They do nothing for your Street Cred rating, and also can’t be summoned at will, which is a pain.

In order to do those things, you’ll need to own one. You’ll start out in Cyberpunk 2077 owning one car – the Archer Hella EC-D. This a fine vehicle for the early stages of the game, but pretty soon you’ll likely want something a bit quicker – and a bit more outlandish-looking. 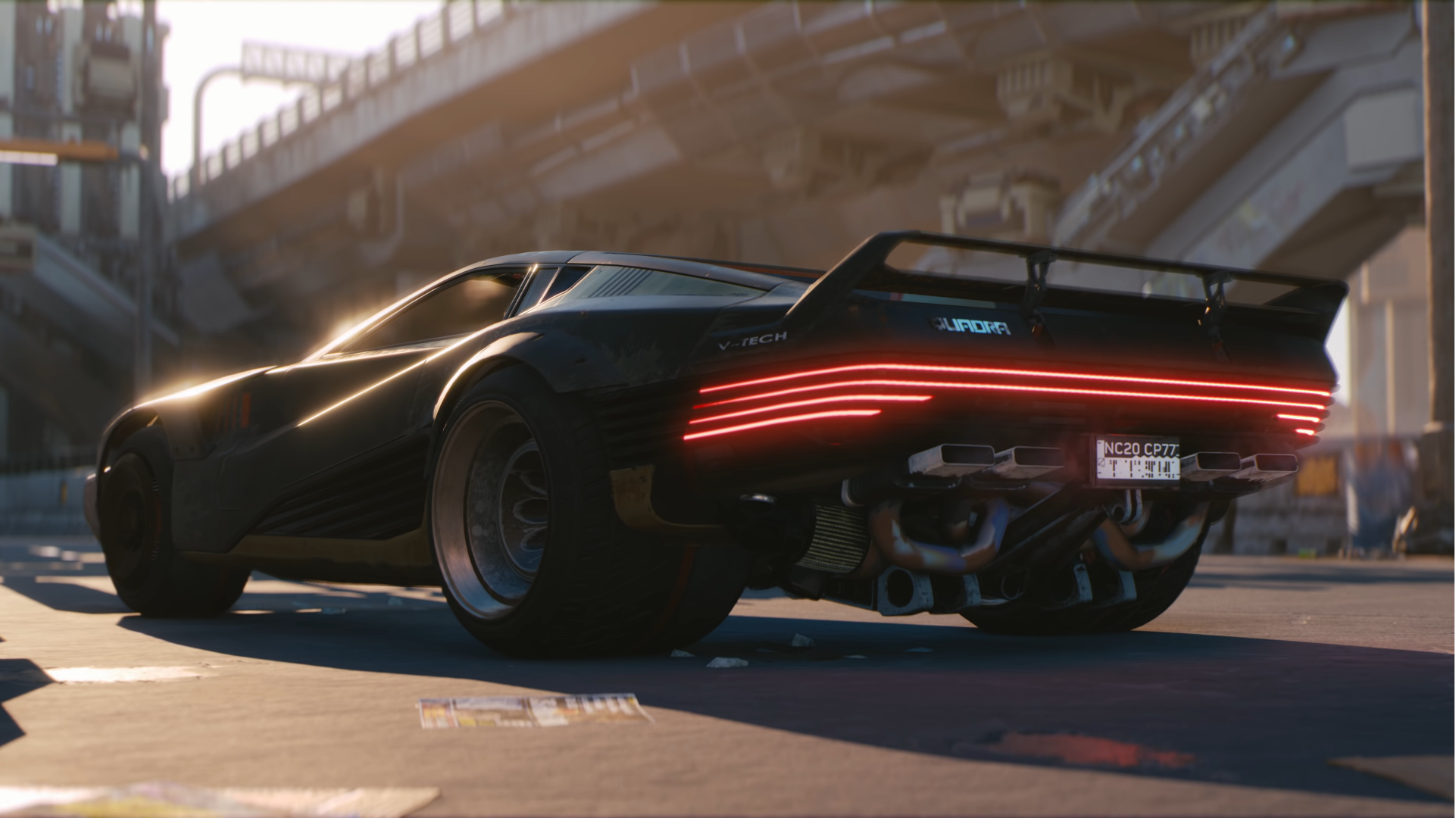 How to get new vehicles in Cyberpunk 2077

Naturally, you can obtain new vehicles in a few different ways. Keep in mind that you won’t be able to get any vehicle other than the starter Hella EC-D until you’ve completed the first act of Cyberpunk 2077’s story, which culminates in your heist with Jackie.

After that, you can obtain cars and bikes in a few different ways, which we’ll explain quickly below. Keep in mind that a few vehicles are exclusive to certain lifepaths.

Where to find free cars and motorcycles in Cyberpunk 2077

Some new cars and motorcycles will naturally come as you complete the game’s content. For instance, completing the “Life During Wartime” main quest in the main story will unlock V one of their first motorcycles.

This is nice and early in the game, and from there a range of side jobs and even hidden quests (the blue markers on the map) can unlock cars. Some quests, meanwhile, will unlock cars for purchase. Speaking of…

How to buy cars and bikes in Cyberpunk 2077

Once you’re out of the first act of the game and have completed the heist, you’ll be turned loose on a more open Night City, with pretty much all of Cyberpunk’s content open for you to explore. That also includes buying cars.

To buy a car, it’ll first need to be offered to you. Cars unlock in three primary ways: when visiting an area, through street cred, and through side quest completion.

When a car is available for you to purchase, the fixer of the area where that car is found will send you a text message the next time you enter that area. The car will then be added to your map and quest log, appearing as if a quest. You can hover over the icon on the map to see the car’s price, which varies massively from a few thousand Eddies up to tens or even hundreds of thousands. 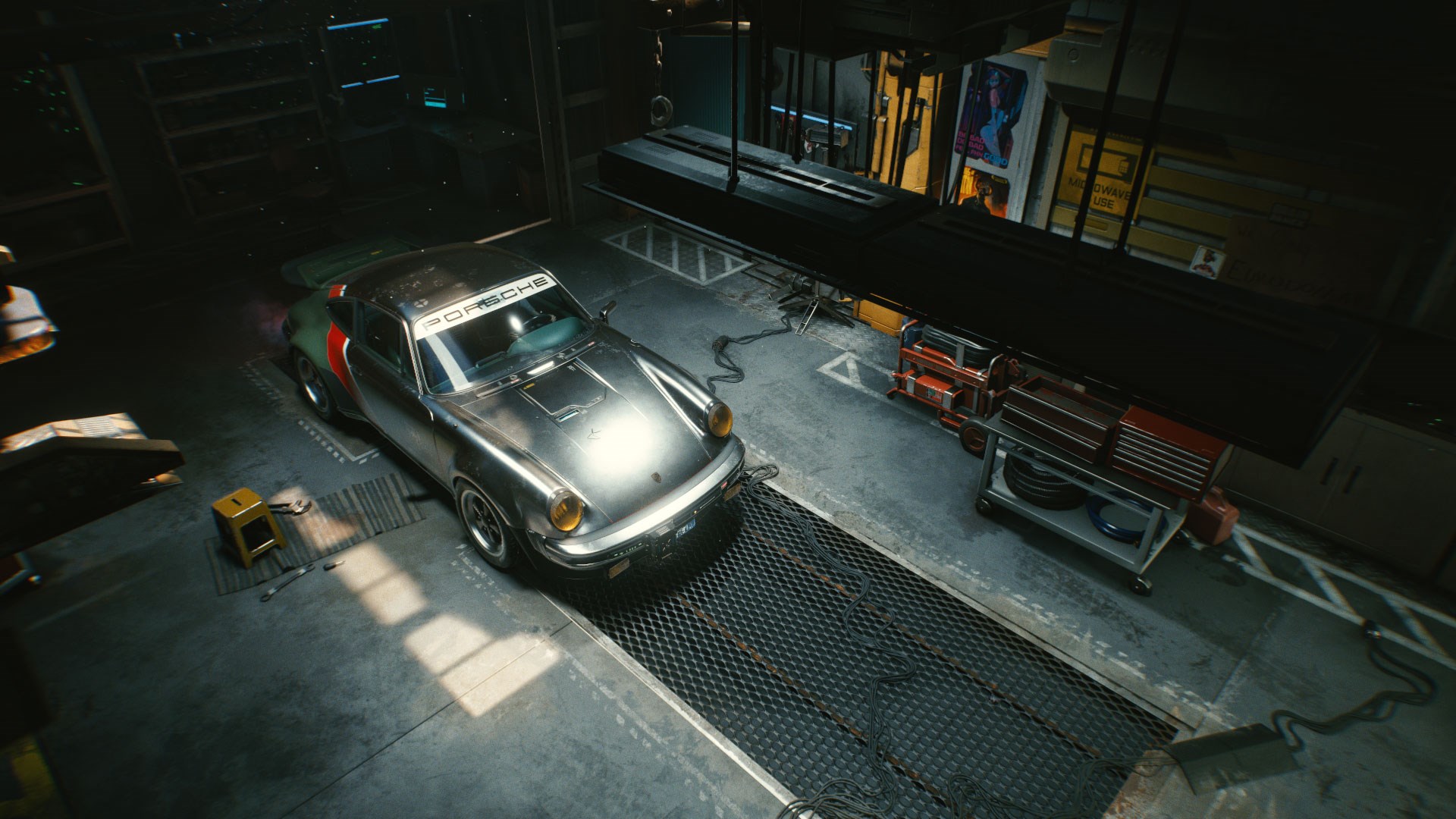 So, for instance, one car might simply require you to enter the area where it is waiting for you – such as the Badlands – and then it’ll immediately be offered for sale to you. Others will require your street cred to be at a certain level, then trigger when you enter its home area with a high enough street cred. Finally, some will be triggered for sale upon completion of some quests.

If you’re after the Quadra Turbo-R, the sick car from all of the game’s marketing, keep an eye out for the “Life’s Work” gig, which is found in the Vista Del Ray region. Completing that quest leads to the “Sex on Wheels” quest, where you’ll have the chance to then grab that car.

Economy vehicles in Cyberpunk 2077 are more or less what they sound like: they’re the most common type of vehicle, and the closest thing to ‘ordinary’ cars in the hi-tech future of Night City. As such, they make good starter vehicles for V near to the beginning of the game. Don’t be fooled, though — a few of these so-called ‘Economy’ models are actually pretty nice, with a price tag to match.

Executive vehicles are perfect for getting V where they want to go in style, while still being quite reasonably priced for the most part. The comfortable cost of these seemingly very swanky cars makes more sense when you realise that they are among the slowest vehicles in the game — useful for making an impression, but not so much during a high-speed pursuit.

If the Executive cars favour form over function, Sports vehicles are the inverse, being more concerned with speed than with looks — though they do tend to manage a little bit of that too. In most cases it’s the horsepower that adds zeroes to the end of the price tag, however, so expect to pay a little more for these than for the sleeker but slower models.

The true luxury vehicles of Night City are Hypercars — high-end machines that boast impressive stats and stunning aesthetics at the same time. Unsurprisingly, these cars are highly costly, and it’s vanishingly rare to find one for sale; but V will get a few opportunities to obtain one during the course of the game.

Motorcycles in Cyberpunk 2077 offer a few advantages over cars. A high-performance motorcycle tends to cost a little less than a car with equivalent stats, and of course they offer greater manoeuvrability which can be useful in a number of situations. Also, riding a motorbike is one of the few third-person parts of the game that allows you to admire your carefully crafted V while they weave in and out of traffic.

Heavy-Duty vehicles are incredibly handy in all-out combat situations, since they’re mostly military designs built to roll easily over enemies while protecting their occupants from harm. Unfortunately, V can’t buy these military-grade means of transportation, so though they can be stolen they can’t be owned or summoned — with one exception.

To put the keys to Johnny Silverhand’s gorgeous Porsche 911 Turbo in your pocket, you need to follow the main story to Act 3.

At this point, you’ll have the opportunity to embark on an optional quest line: Chippin’ In.

Look to the left of where you get it and you’ll see a shipping container suspended from a crane. Climb the ladder in front of your to the controls and activate them. 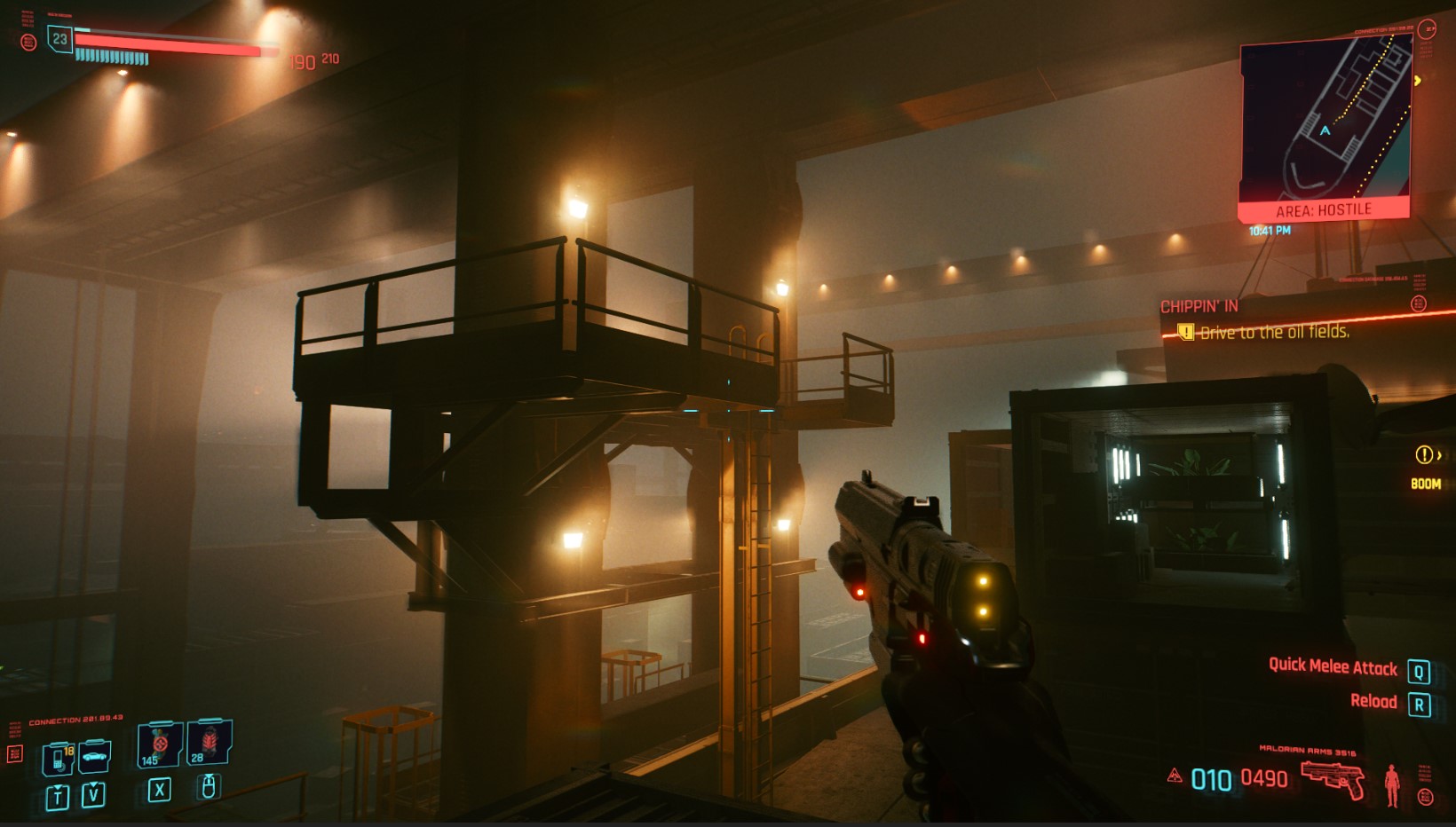 This lowers the car to ground, so hop in and it’s added to your garage. 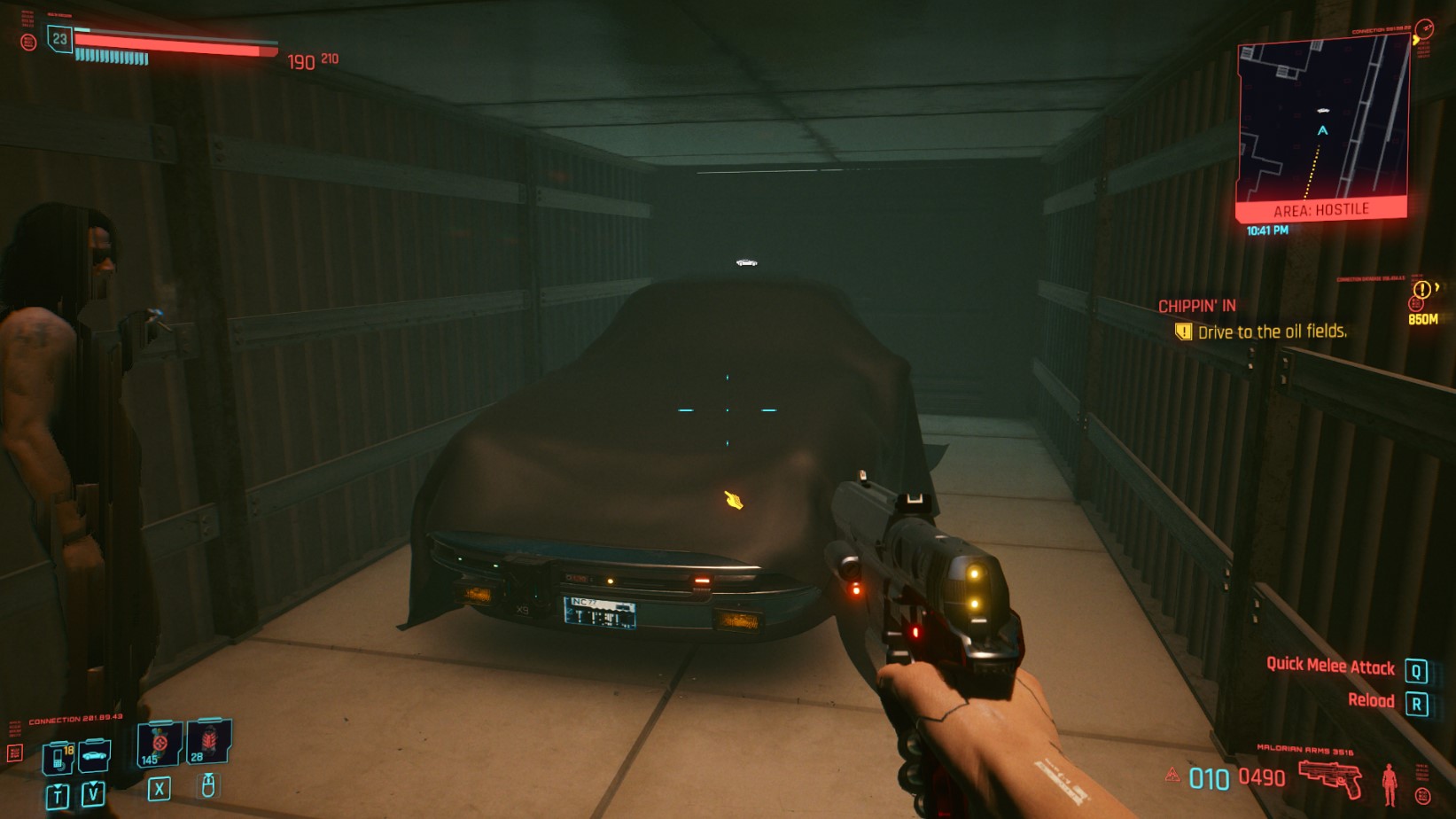