Cracking digital security, netrunning, and generally being a black hat hacker are world-defining traits of Cyberpunk 2077, and the genre itself.

One of the key parts of the in-game hacking system is Breach Protocol, a matching puzzle that can be confusing at first, but quickly becomes a fun brain-teaser.

If you’re struggling to figure out the different moving parts – which lets face it, aren’t explained a huge amount – we’ll run through all of the different permutations that appear in Breach Protocol puzzles. 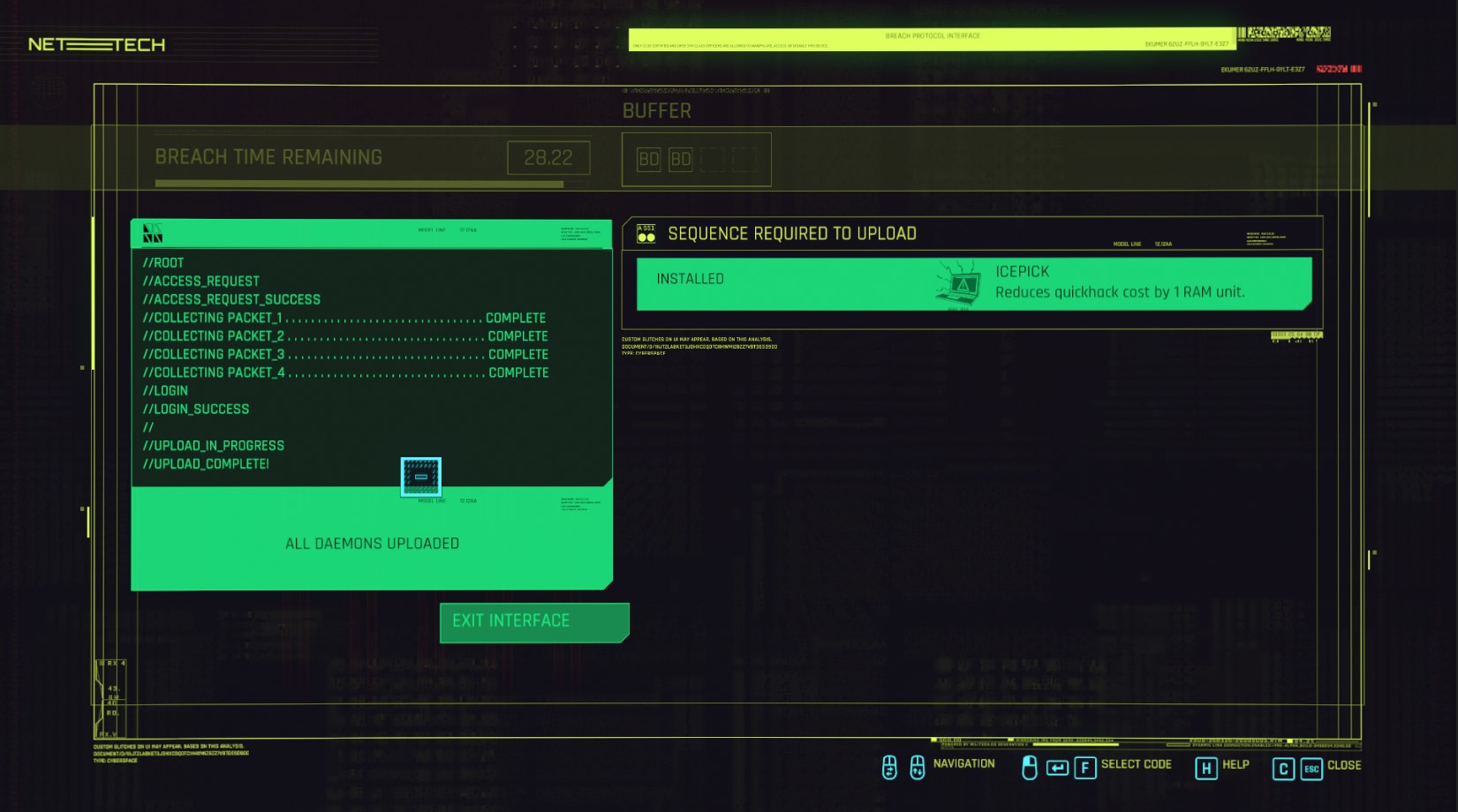 How to initiate Breach Protocol in Cyberpunk 2077

Breach Protocol is a specific type of Quickhack, which in turn is enabled by your cyberware (specifically, the presence of a cyberdeck in V’s system).

Breach Protocol works a lot differently from other Quickhacks, in that it’s the only one to initiate its own mini-game.

The aim of Breach Protocol is to upload what the game calls “daemons” — which is essentially cyberpunk slang for “computer viruses” — onto the target system for a variety of effects, including getting the upper hand against enemies during combat, as well as netting V some extra money and resources in a number of situations.

There are two main uses for the Breach Protocol command throughout Cyberpunk 2077: softening up enemies, or cracking open a secure server for some loot and cash. You’ll also use the ability to decrypt data shards at certain points during the story.

Depending on your Intelligence Attribute, you can hack into terminals and access points all over Night City. You can find them in clubs, on rooftops, and during your main and side missions, denoted by a red hexagon on the map.

Hacking these terminals grants you a varying amount of Eurodollars, as well as components for making new programs.

Meanwhile with combat, using Breach Protocol when scanning an enemy allows you to do a whole host of useful things, including shutting down all of the security cameras in the area, reducing the RAM cost of other hacks, and making every connected enemy more susceptible. 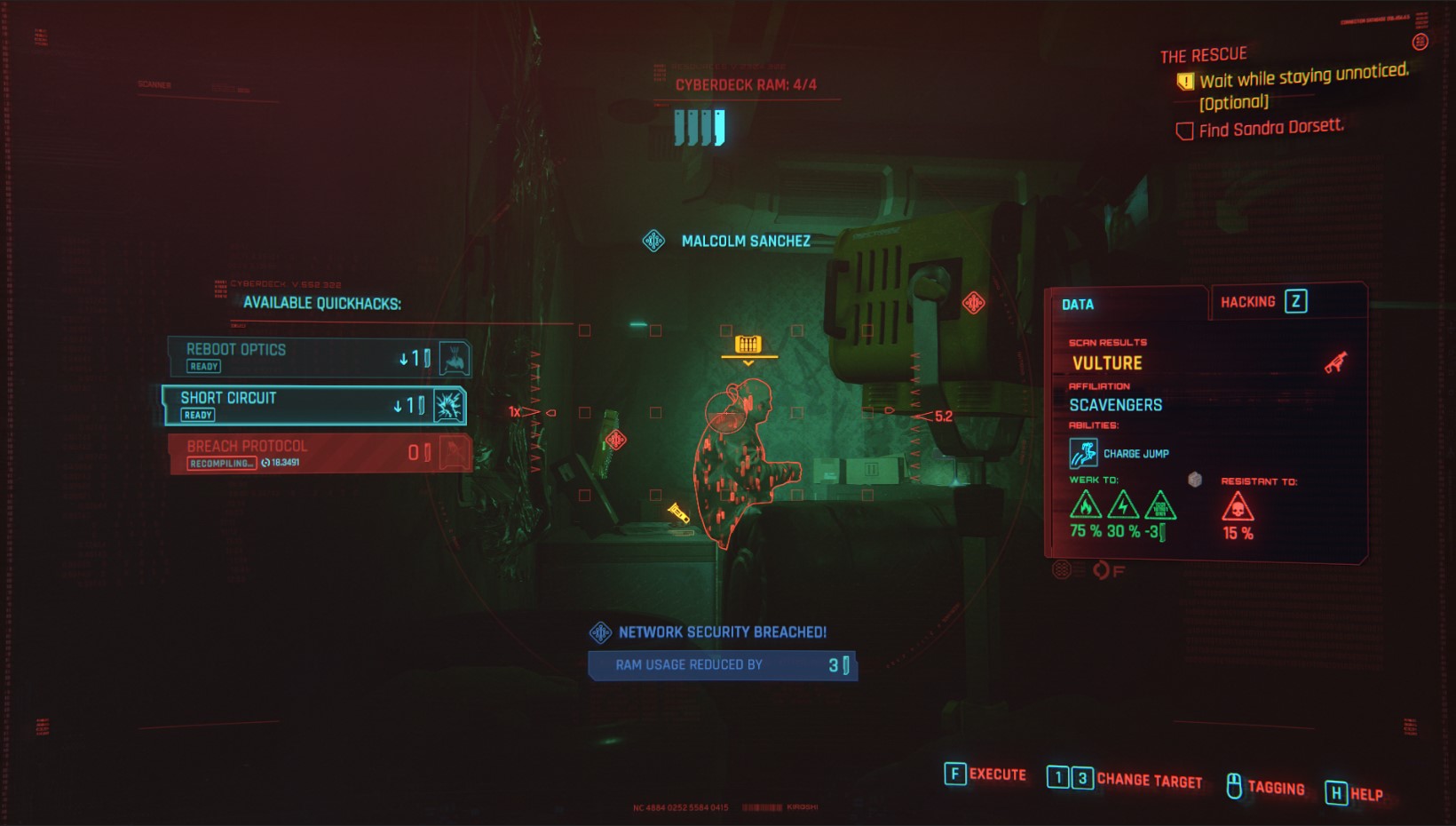 When solving a Breach Protocol puzzle there are three things to keep an eye on:

When you start a Breach Protocol puzzle, you have to start from the first horizontal line at the top of the grid.

Then when you’ve selected a code snippet, your next one must be selected from the same vertical row as the one you’ve just clicked on. 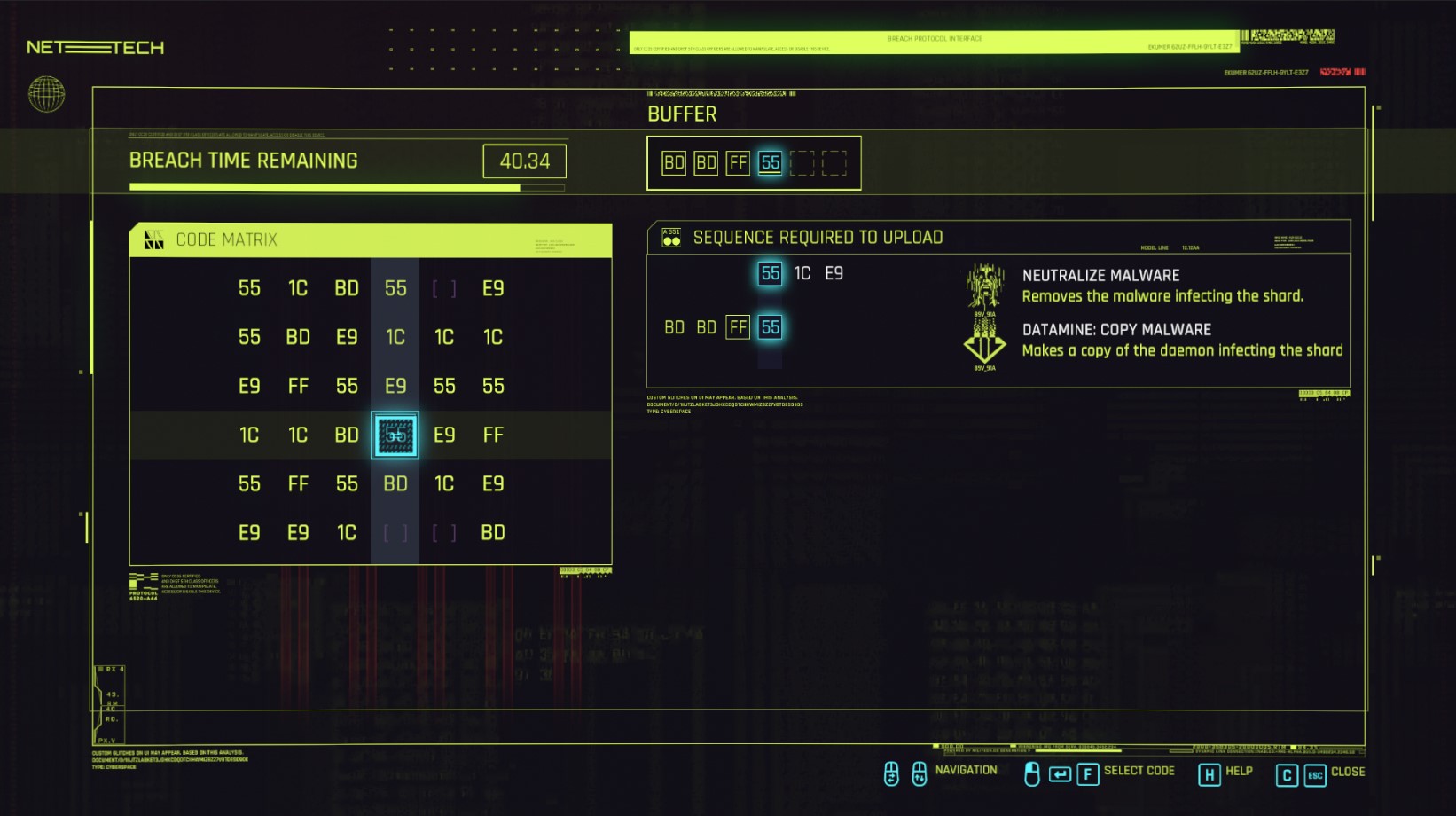 It then switches between the horizontal and vertical lines, each time you click on a new snippet.

This means you have to plan ahead with your moves, paying attention to which snippets are in the same horizontal and vertical lines as the snippet you’re moving to.

For example, if the code string is: BD 55 E9, then I’d select a BD from the top horizontal line that has a 55 in the vertical line below it. Then you’d need to plan ahead to check that 55 has an E9 in the horizontal line next to it.

If you can’t do it directly, but have spare moves, you’re allowed to select snippets that aren’t in the string to manoeuvre into the right place.

How to solve Breach Protocol puzzles with multiple strings

Pretty quickly in Cyberpunk 2077, you’ll come across Breach Protocol puzzles with more than one string on the right-hand side, allowing you to potentially upload multiple daemons. It’s usually possible to solve them all and get every effect at once.

My rule of thumb is to start from the bottom of the list and work up, completing the bottom string first, before moving onto the higher ones. 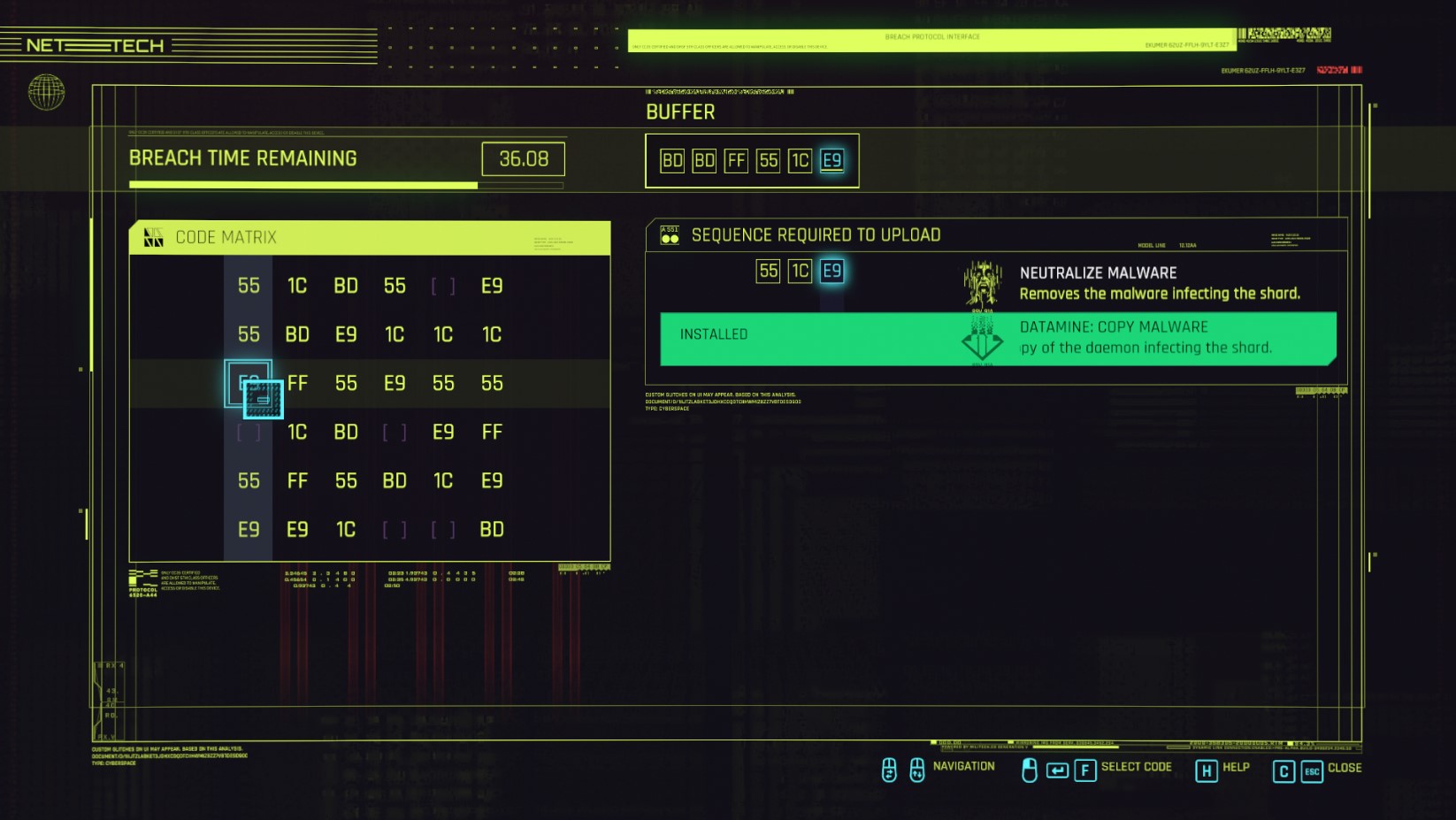 Later on you’ll encounter puzzles with larger grids and different snippets. These work in the same way, and might even be easier because you have more choice.

How to improve your chances of success at Breach Protocol

Breach Protocol is a skill in Cyberpunk 2077, which means it increases every time you use it — in this case, practice is likely to make perfect for you as the player as well as for V in-story.

This skill sits under the Technical Ability attribute, so regularly putting Attribute Points into that area will be helpful. 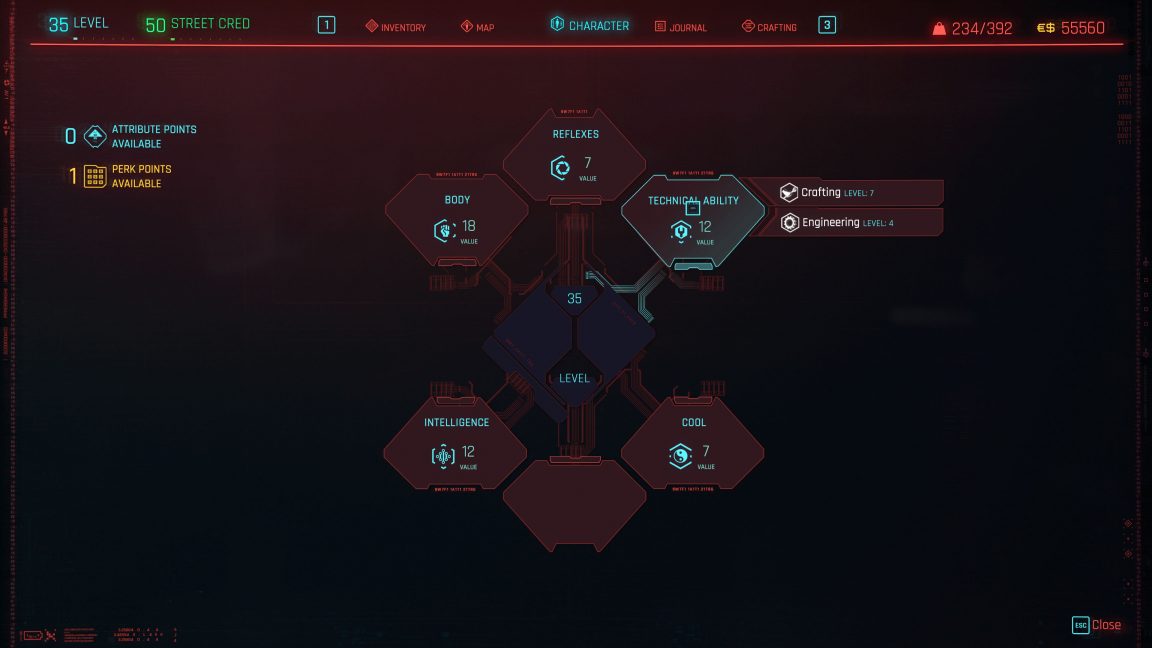 Furthermore, increasing the Breach Protocol skill will unlock up to 20 related Perks as you progress through the skill tree, so you can buy and equip some potentially very useful ones to do things like decreasing RAM cost, increasing breach time, as well as a number of one-off effects.

While Breach Protocol mini-games are timed — often giving you only 30 or 45 seconds to complete the whole thing, regardless of how many strings there are — the timer doesn’t begin to run down until you make your first move. Taking a moment to plan your path before making a start can make a huge amount of difference to your success odds.

Finally, if you’re really feeling frustrated with a particular Breach Protocol, there is often a way to reset the mini-game. For static breaches — that is, when hacking an access point or data shard, rather than a person during combat — exiting and re-entering the mini-game before you begin the breach will refresh the grid, allowing you to take another shot at a different version of the puzzle.