Cyberpunk 2077 is chock full of references to other video games.

After the huge, industry-shaking success of The Witcher 3, CD Projekt RED became one of the world’s most popular game developers. So what do you think happened when they went knocking at other studios about putting a cameo in their game?

Many of the references in the game are just nods – little mentions in dialogue of the imminent release of ‘No Life 3’, mentions of Blade Runner, and numerous names that wink to The Witcher and other gaming universes. But a couple go a little deeper.

Back when Death Stranding launched on PC, the official Cyberpunk 2077 Twitter account congratulated Hideo Kojima on the game’s launch in a unique way. As well as posting a photo of Kojima atop one of Cyberpunk’s vehicles, a real photo from a gaming convention, the post also attached a matching render – Kojima recreated in the Cyberpunk universe as a character model.

From Tokyo to Night City — that’s quite a ride…
Congratulations on the PC launch of Death Stranding, Kojima-san and the team!

Unsurprisingly, this character model wasn’t just created for a social media post – Kojima can be found in-game within Cyberpunk 2077. 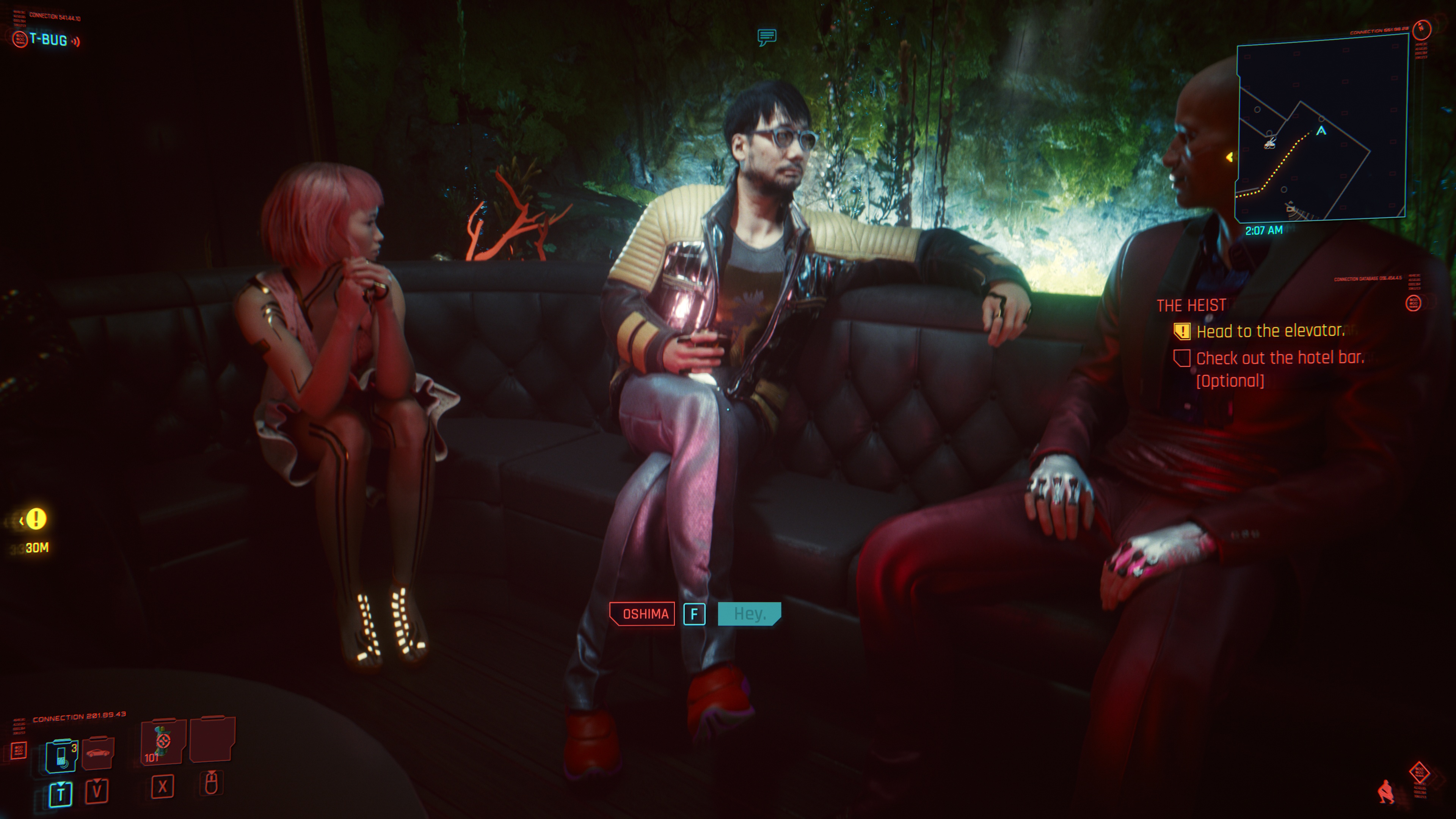 If you don’t want to miss him, wait until you do the heist mission with Jackie, at the very end of the prologue section of the game. Depending on how long you mess around in the open world, you might not finish the prologue until almost ten hours in, or you might hit it in a couple of hours.

If you talk to him, he asks you if you’re here to pitch him a game. So you can go and pitch him a PT reboot, if you want, I suppose.

That’s not all, however! Later, in one of Cyberpunk’s optional side mission strands, you’ll come across this little fella: 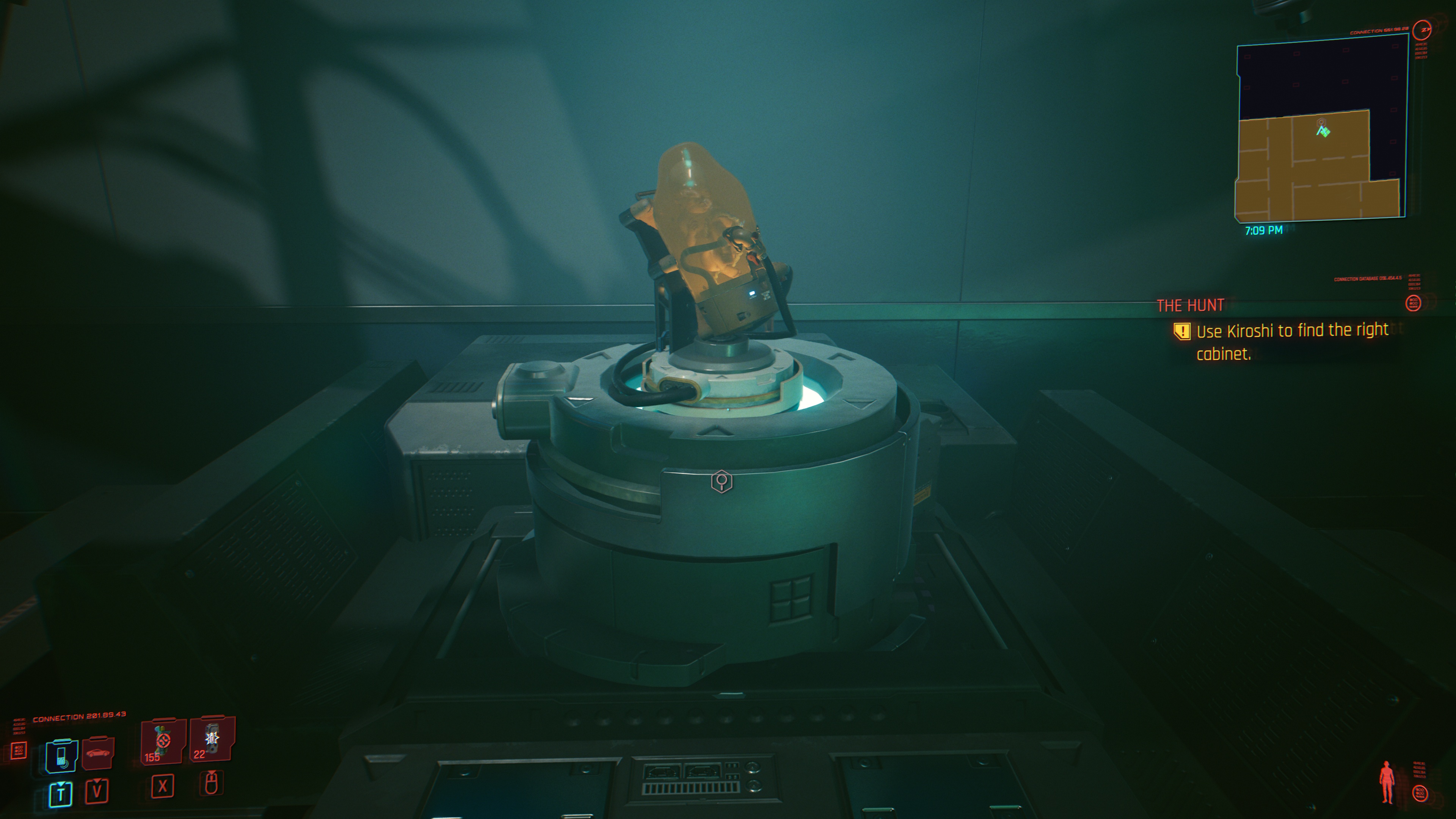 Look familiar? This one is obviously a little more than a cameo of a person, and presumably CD Projekt had to hash out full permission from the rights holder of Death Stranding… which is Kojima Productions. So maybe it wasn’t so difficult after all.

If you scan the container with your augmented eyeballs, it’ll note that the device “Maintains the life of the BB and detects BTs”.

If you want to find this guy yourself, simply make sure you follow the side quest line with Night City PD detective River. During one of your investigations together, this will be off in a side room – River will even comment if you approach it.

One last one. If you want another seemingly officially licensed cameo, be sure to check out the quests to recover the Delamin cabs around the city.

Delamin is an AI-powered cab driver in Night City – but some of his cabs go rogue, developing faults and developing dangerous personalities. These personalities vary from a car actively scared of the road to a murderous car that needs to be critically damaged to be stopped… but then there’s one that has an all-too-familiar sing-song voice that keeps talking about cake…

Yep. One of the Delamin cabs is Portal GLaDOS, something which Valve presumably allowed. Neat.

These are just a couple of the cameos we’ve discovered in Night City over the course of 50 hours of playing – who knows how many more are hiding away in the final game?