With the latest expansion, powerful relics are being uncovered in Destiny 2. Artifacts are an interesting new addition to Destiny 2: Shadowkeep, with each new season uncovering a new one. Veterans of the original Destiny will remember Artifacts, particularly if you played the Rise of Iron expansion – and in the Season of the Undying your Artifact is The Gatelord’s Eye.

Basically, Artifacts are a series of seasonal challenges that give you powerful mods. As you progress through the challenges, you unlock more. As new artifacts appear, Destiny 2’s metagame will shift as players gain access to different powers and loadouts. This Artifact is intrinsically linked to the Vex, who are among the main enemy types in Shadowkeep.

You can equip mods from your Artifact each season which will have a dramatic effect on your Powers and abilities. Utilising The Gatelord’s Eye to its fullest extent will mean that you’ll be able to upgrade your gear exponentially, surpassing the soft Power cap of 950.

This is part of a much larger shake-up in how mods and armor work in Destiny 2: Shadowkeep, which Bungie has dubbed “Armor 2.0”. 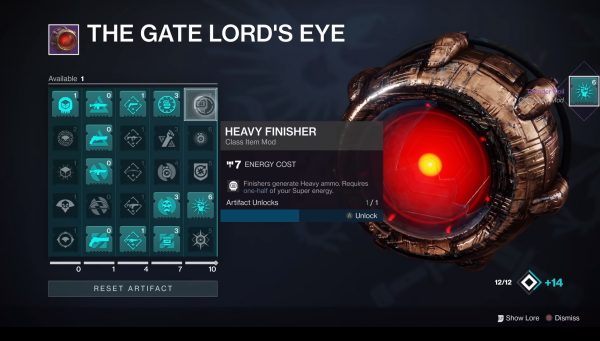 How does the Gatelord’s Eye Artifact work?

The Destiny 2: Shadowkeep expansion aims to make your Guardian more customisable than ever, with new armour mod slots and weapon crafting using the Lectern of Enchantment. Endgame Artifact abilities will be Exotic-like, so it’ll be interesting to see just how powerful they turn out to be. You can massively buff your own damage in a pinch, or give yourself an overshield which could turn the tide of a tough fight.

Some of the mods you can hope to find will relate to ammo or specific weapon types, such as shield-piercing rounds that are strong against Barrier Champion enemies. There’s also the Heavy Finisher perk that will drop Heavy ammo for your fireteam if you pull off a finishing move – but it’ll use up half of your Super energy.

To gain access to a mod, you’ll have to complete the challenge that unlocks it. To view your progress with the Artifact you need to:

Once you’ve unlocked a mod via the Artifact, it’ll be added to your new mod collection. You’ll spend points to unlock these mods, but there will be a wealth of choice available to suit your playstyle.

Now that you know how to acquire the Gatelord’s Eye Artifact, you can jump straight into Shadowkeep’s main story – here’s how!