If you’re looking to give your next gathering a bit of a weird and wonderful boost you can’t do much better than throwing in 30 silly Jackbox party games.

Handily, the Humble Jackbox Party Bundle 2019 is here to offer just that with prices starting at $1.

With such an immense number of games, you’re going to find that some of these are more successful than others at livening up a party. Some are quite brilliant, though, and absolutely worth the small amount of money you need to pay to grab them in this bundle. 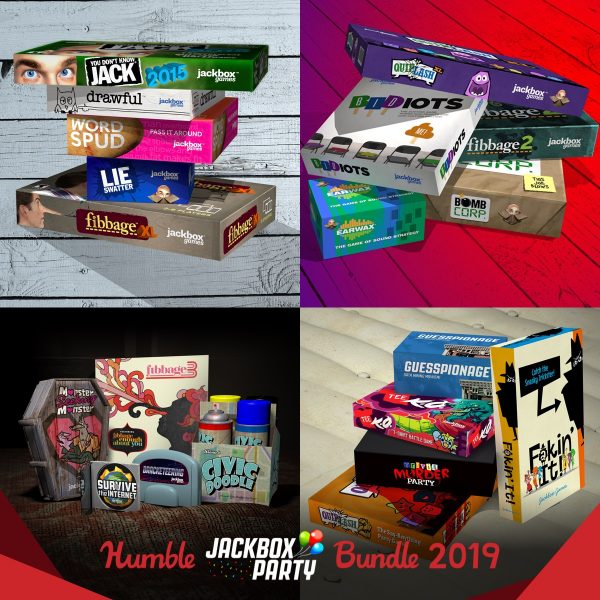 To begin, let’s address the first tier quickly. Featuring a handful of the older You Don’t Know Jack quiz games it doesn’t really represent the best the series has to offer. Some can be perfectly fine if you want to test yourself with a quick bit of trivia, but later games are so much better. When you’re only paying $1 for all six of them, though, you can’t complain too much.

Things get a lot more exciting with the second tier. Here, you’ll find The Jackbox Party Pack 1 + 2 for just $12. I’ve really enjoyed the doodling game Drawful and Quiplash XL, which is like if Cards Against Humanity allowed you to write your own responses to all prompts. If you think yourself a bit of an improv whizz then you should find this great fun.

Pop up to tier three and for a little over $12 you’ll get another six party games. Three of these are other versions of the You Don’t Know Jack trivia game, whereas the rest are solo releases of popular Jackbox Party Pack games. More specifically, there’s Drawful 2, Quiplash and Fibbage XL.

Finally, you can pay $15 for The Jackbox Party Pack 3 + 4. There are some good games in this pair of compilations, including macabre elimination quiz Trivia Murder Party, obscure stats game Guesspionage and sly observation game Fakin’ It.

If you decide to purchase the Humble Jackbox Party Bundle you’ll also be given a voucher for 50 per cent off The Jackbox Party Pack 5. This most recently released iteration features my favourite Jackbox game, Mad Verse City. In this, players must face off against each other in a series of robot rap battles. The lyrics you fire out are read aloud by different automated text-to-speech voices, resulting in some strange, stupid and often hilarious results.

The Humble Jackbox Party Bundle 2019 starts from just $1 and will be available for the next two weeks.

For even more offers you can take a trip over to Jelly Deals where we’ve got a look at the best PS4 external hard drives, the best portable chargers you can buy in 2019 and a Magic the Gathering Arena Beginner’s guide.