It appears the contents of a bulked up standard edition for Cyberpunk 2077 may have leaked early alongside the Collector’s Edition.

Because this is unconfirmed, no matter how legitimate it looks, consider it a rumor for now.

Over on resetera, and image purportedly showing the launch edition for Cyberpunk 2077 is posted. The image was said to come out of Poland, where CD Projekt self-publishes. Warner Bros. is the publisher outside of the country so whether the same edition will be made available elsewhere is unknown at this time.

Looking over the image you will see the standard box art, a Night City postcard render and an artbook. It also appears to contain a copy of the Cyberpunk 2020 pen-and-paper handbook. 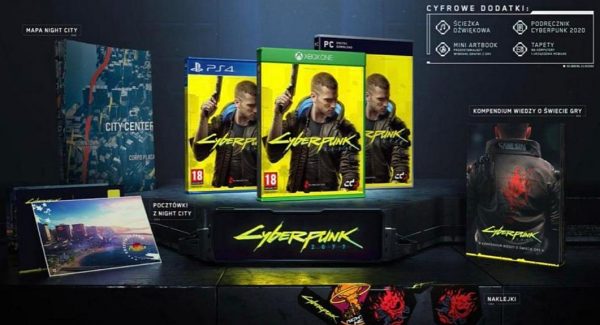 If you’re wondering why the edition is rather beefed up, as resetera notes, The Witcher 3’s standard edition had extra goodies bundled with it too. It included a map, soundtrack disc, and other digital and physical goodies.

If you head over to this resetera thread, you will see what’s rumored (again we cannot verify any of this) as the Collector’s Edition.

CD Projekt RED has plans to show Cyberpunk 2077 at E3 2019 this week, and we suspect it will happen during the Xbox E3 briefing later today. We may even get a release date. Keep your fingers crossed.