A new Battlefield game means we have a host of fresh new weapons to chase after, each locked behind levels of progression across the different classes.

While Battlefield 5 certainly has its fair share of repeat weapons – ones that appeared in Battlefield 1 – DICE does a good enough job to differentiate their WW2 iterations from the WW1 versions. Regardless of that, the game has plenty of weapons, each bringing something different to the pile.

If you’ve been keeping up with the updated class and Combat Roles in Battlefield 5, you’ll know that weapon distribution amongst the different classes has been changed once again.

In Battlefield 5, the Assault gets assault rifles and semi-automatic rifles, whereas Medic is limited to SMGs. Support has access to LMGs, and the new MMGs, while the Recon remains the bolt-action, and self-loading rifle master. As you can see, the Medic, and Recon are more limited in their available selection compared to Assault, and Support. This is by design, but it doesn’t necessarily mean you’ll be stuck in their intended ranges forever.

Read on below for a round-up of our favourite weapons in each class, and a few details as to why we made these choices.

Before we begin, it’s worth mentioning that weapon Specializations will be considered in some of these recommendations. Like it or not, weapon skill trees are a thing in Battlefield 5, and they’re significant enough to change the performance of each weapon.

Let’s start with the most versatile class in Battlefield 5, your friendly tank buster and all-around objective attacker. The Assault class excels at medium to long range combat thanks to its monopoly on assault rifles, and semi-automatics. 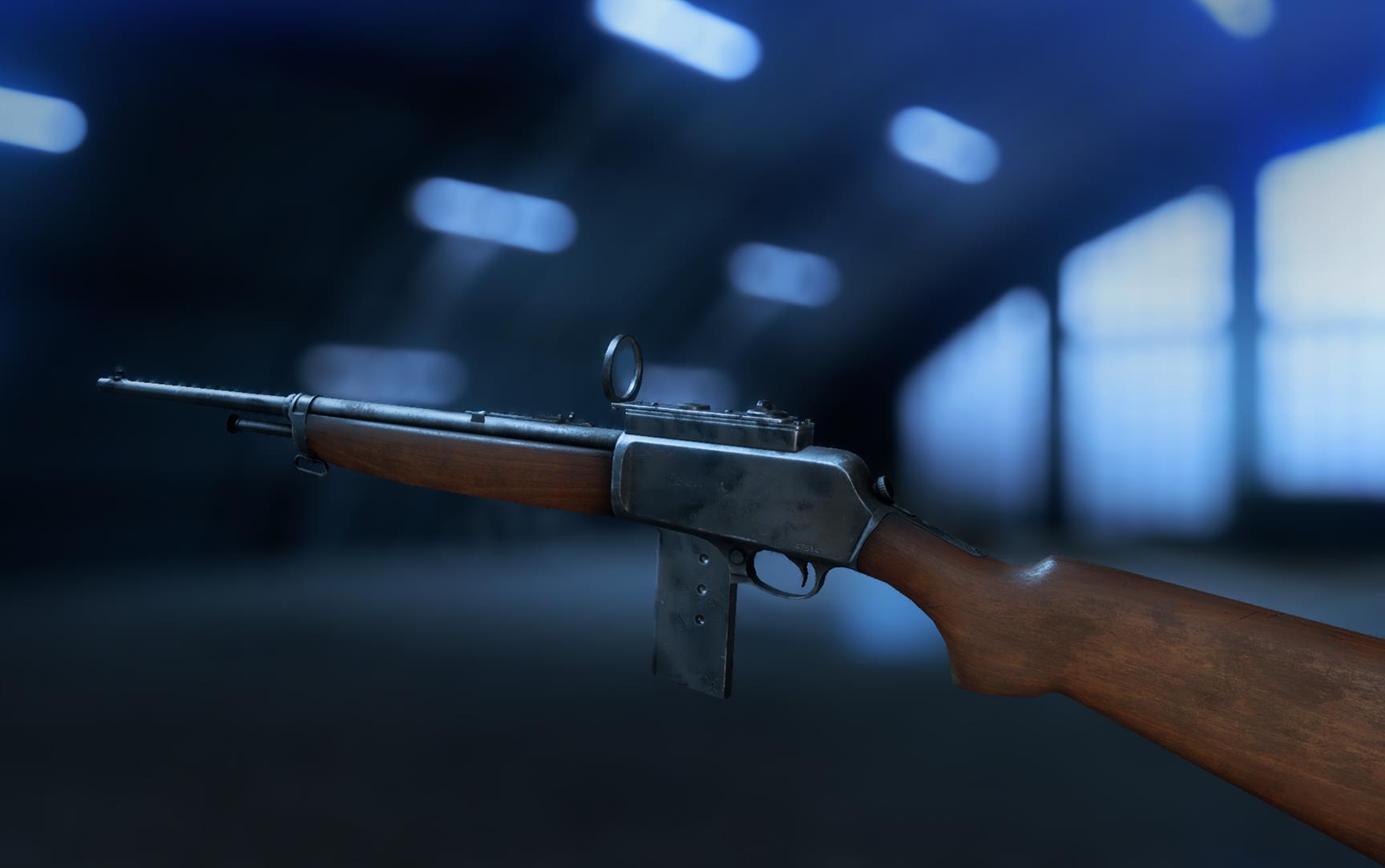 If you miss the old front line pusher Assault with its trusty SMGs, the M1907 SF is the weapon for you. Though this is an assault rifle, it has the highest rate of fire, and best hip fire accuracy out of all ARs. In other words, it’s an SMG disguised as an assault rifle.

The M1907 SF has no problems going toe-to-toe with the best Medic SMGs. If you’re always the first on an objective, or like to support armour by defending against approaching defenders in CQC, the M1907 SF will get the job done. The weapon’s obvious drawback – outside of its limited range – is the low amount of starting bullets.

The M1907 starts out with just 16 bullets in the magazine, which is not that many considering its rate of fire. You can equip it with an extended mag to bring that up to 21 – decent but nothing special. We suggest going with Quick Aim > Extended Magazine > Custom Stock > Lightened Stock. The weapon’s hip fire is already great for an AR, so it makes more sense to improve its scoped attributes, just don’t engage targets beyond the medium range. 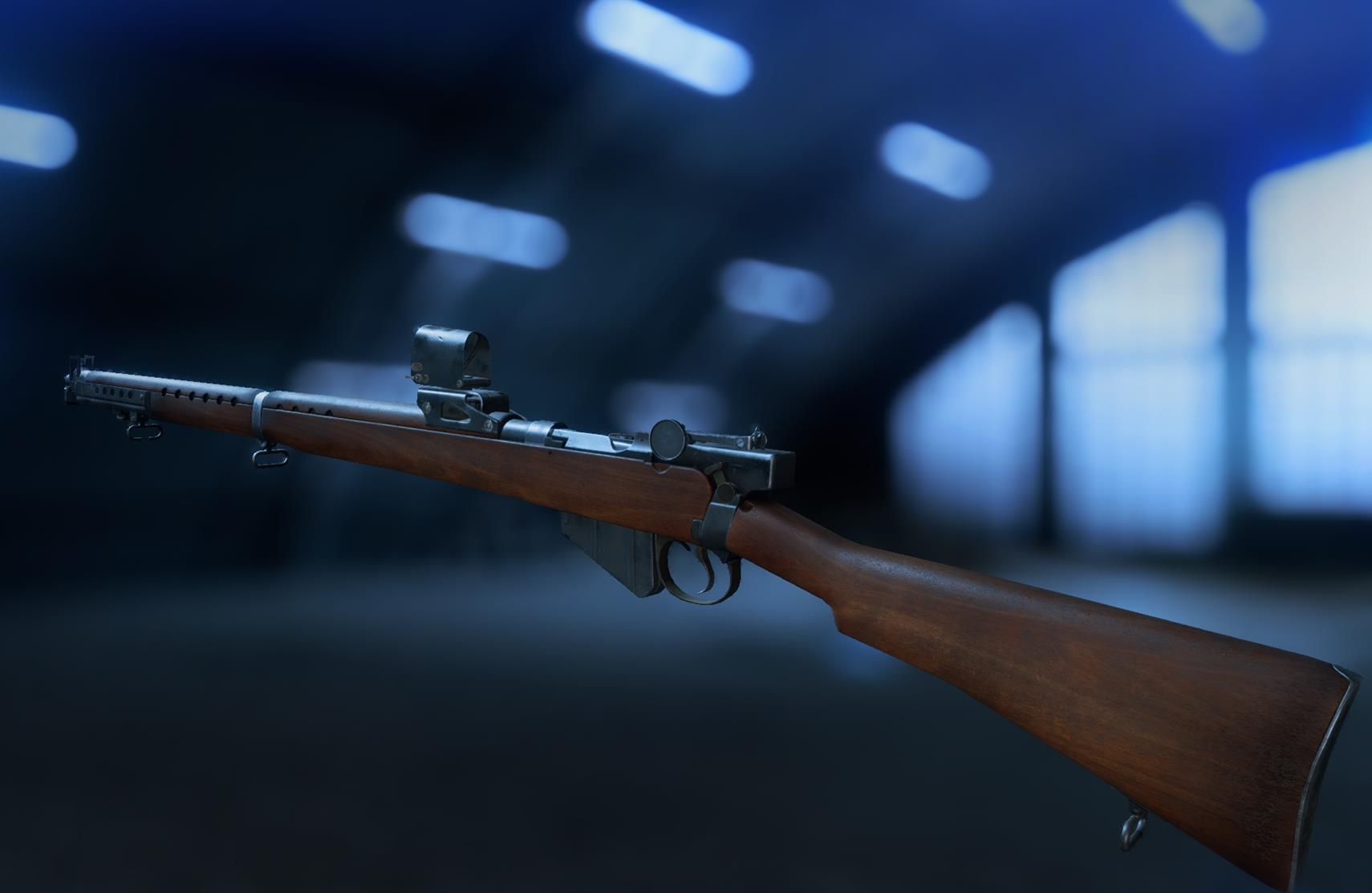 The selection of semi-automatic rifles in Battlefield 5 is impressive. You can spam fire with the M1A1 Carbine, go for maximum damage with the Gewehr 43, or pick the Turner SMLE for the perfect marriage between the two.

This is really what defines the SMLE in Battlefield 5 more than anything else. It can’t match the high rate of fire of the M1A1 Carbine, but it beats it in damage and recoil. By the same token, the SMLE does less damage than the Gewehr 43 but you can control it better. The SMLE is intended for long-range combat, so we suggest going with Barrel Bedding > Custom Stock > Detachable Magazines > Recoil Buffer.

You can pick the hip fire tree if you’re looking for a bigger magazine rather than a faster reload, but the reload is quick enough for a semi-auto that we’d much rather stick with the accuracy of the aimed fire tree.

Pick the SMLE if you want decent long-range accuracy and damage without having to put up with the lower rate of the fire of the Gewehr 43, or the high ROF but worse damage of the M1A1.

Medics in Battlefield 5 are meant to always be on the front lines, healing and reviving teammates as they fall. Though it’s not impossible, you won’t have much luck going against assault rifles or semi-autos. Medics excel at CQC combat, however, so don’t take this advantage lightly. 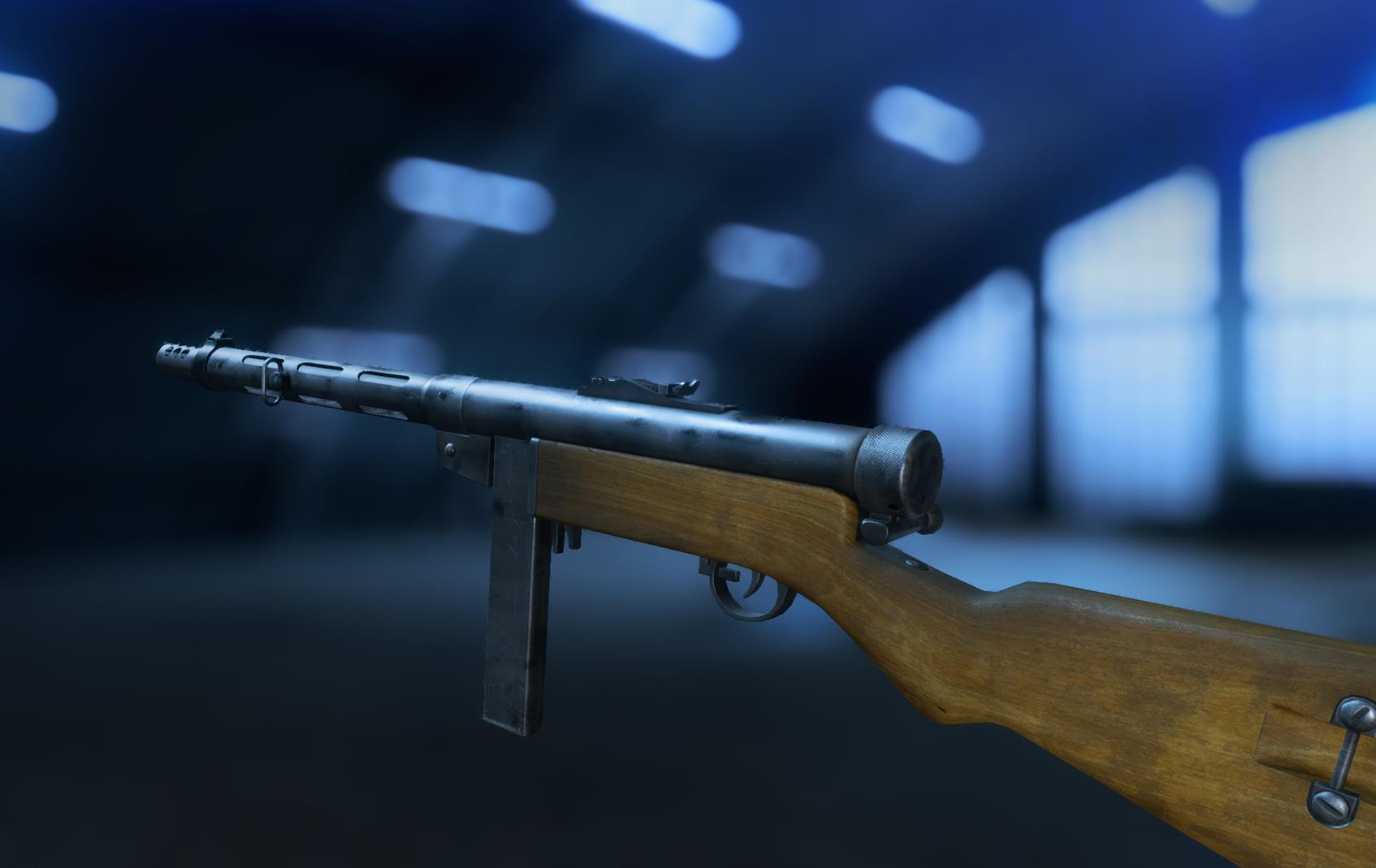 Nothing puts out damage faster than the Suomi KP/-31 SMG. This tiny weapon packs a lot of punch, and is unmatched in hip fire accuracy and rate of fire. The Suomi is not a ranged weapon as a result, so anything beyond near-medium range and you may as well throw stones at your target.

It does so little damage over range – not to mention kicks like a mule – that you shouldn’t really bother with anyone not in close proximity. But, get close enough and watch them melt from how obscene it is. The Suomi starts out with a meagre 20 bullets in the magazine. You can certainly manage there, but you should go for the 50-bullet magazine as soon as possible.

With it equipped, it basically becomes a better MP7 or P90 from Battlefield 3. For Specializations, go with Slings and Swivels > Ported Barrel > Extended Magazine > Polished Action. This setup makes the Suomi a hip fire monster that has the rate of fire, and bullets in the mag, to support it. 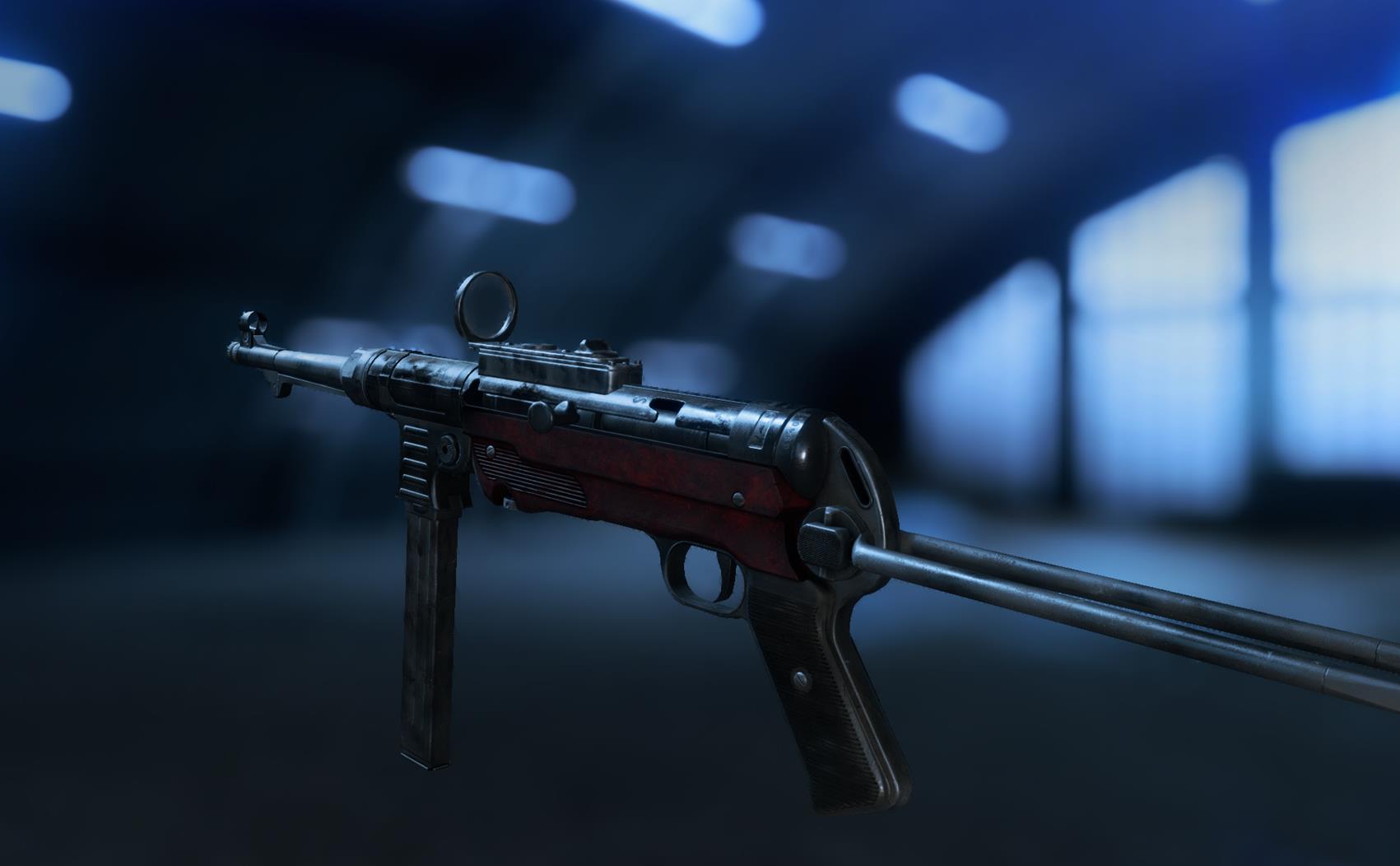 The MP40 strikes a good balance between close-range output, and long-range viability. SMGs, in general, aren’t suited for longer ranges in Battlefield 5, as we explained above, but you can get away with it by using the MP40.

Of your early options, the MP40 trumps the Sten in long-range accuracy without sacrificing the rate of fire. It does, however, come with more aggressive recoil, making it slightly more challenging to burst fire at ranges. The MP40 won’t help much against the faster rate of fire options in CQC, but it’s your best option for harassing Assault, and Support players without feeling completely helpless.

One final note about the MP40: you may want to go with the default iron sights. This ultimately comes down to personal preference, but we’ve had better luck hitting ranged targets with the iron sights equipped. Any of the other sights, even the standard red dots, really expose how inaccurate SMGs are at range and can be a bit distracting because of the spread you see looking down the sight.

The Support continues to be the master of LMGs in Battlefield 5, and it’s the class you rely on for your ammo needs. LMGs have always been different beasts from the rest of the weapon pack, and this remains mostly true in Battlefield 5.

However, with the arrival of MMGs, the Support now finds a new role of effective suppressive fire. This adds to the class’ versatility, but it won’t turn the heads of anyone not interested in heavy weaponry. 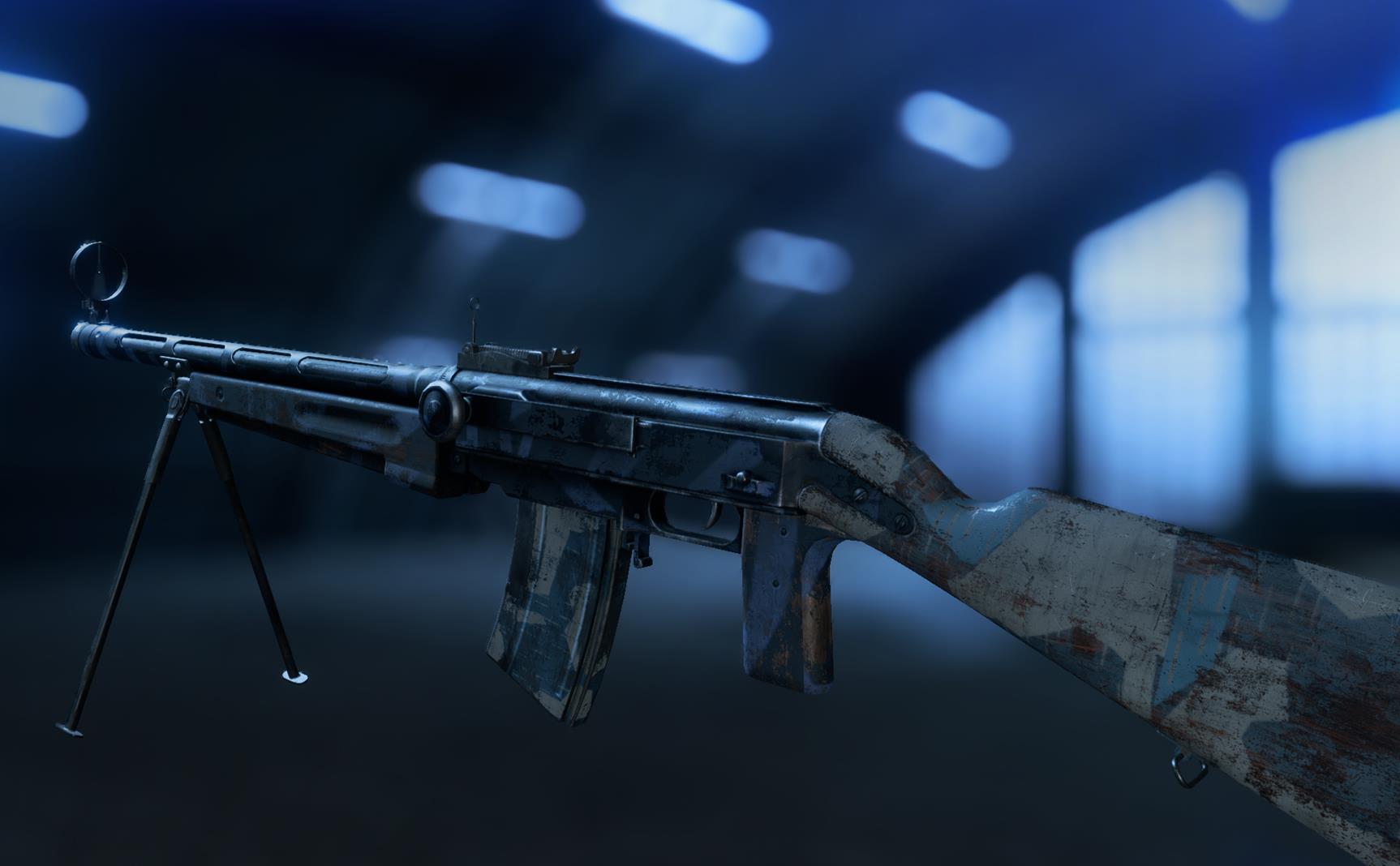 The KE7 may be a starting weapon, but it will outperform most other LMGs. In fact, because it’s available so early, its Specializations will be easier to unlock than the rest of ’em, and it’s good enough to sway assault rifle fans.

That’s because the KE7 is essentially a slow-firing assault rifle. It has incredible accuracy, good rate of fire, and acceptable recoil. You can get away with treating the KE7 as an assault rifle, despite the attached bipod.

All of the Support’s weapons benefit from using the bipod, of course, either while prone or by resting it on a ledge. It’ll serve you very well in both cases, and will always strike a good balance across the different attributes. For the KE7, we’ll go with Custom Stock > Barrel Bedding > Ported Barrel > Quick Reload.

This helps establish its role as a weapon mainly designed for stationary fire without investing into useless stats like a boost to hip fire, and also makes it viable in those one-on-one fights with assault rifle players who like to strafe. 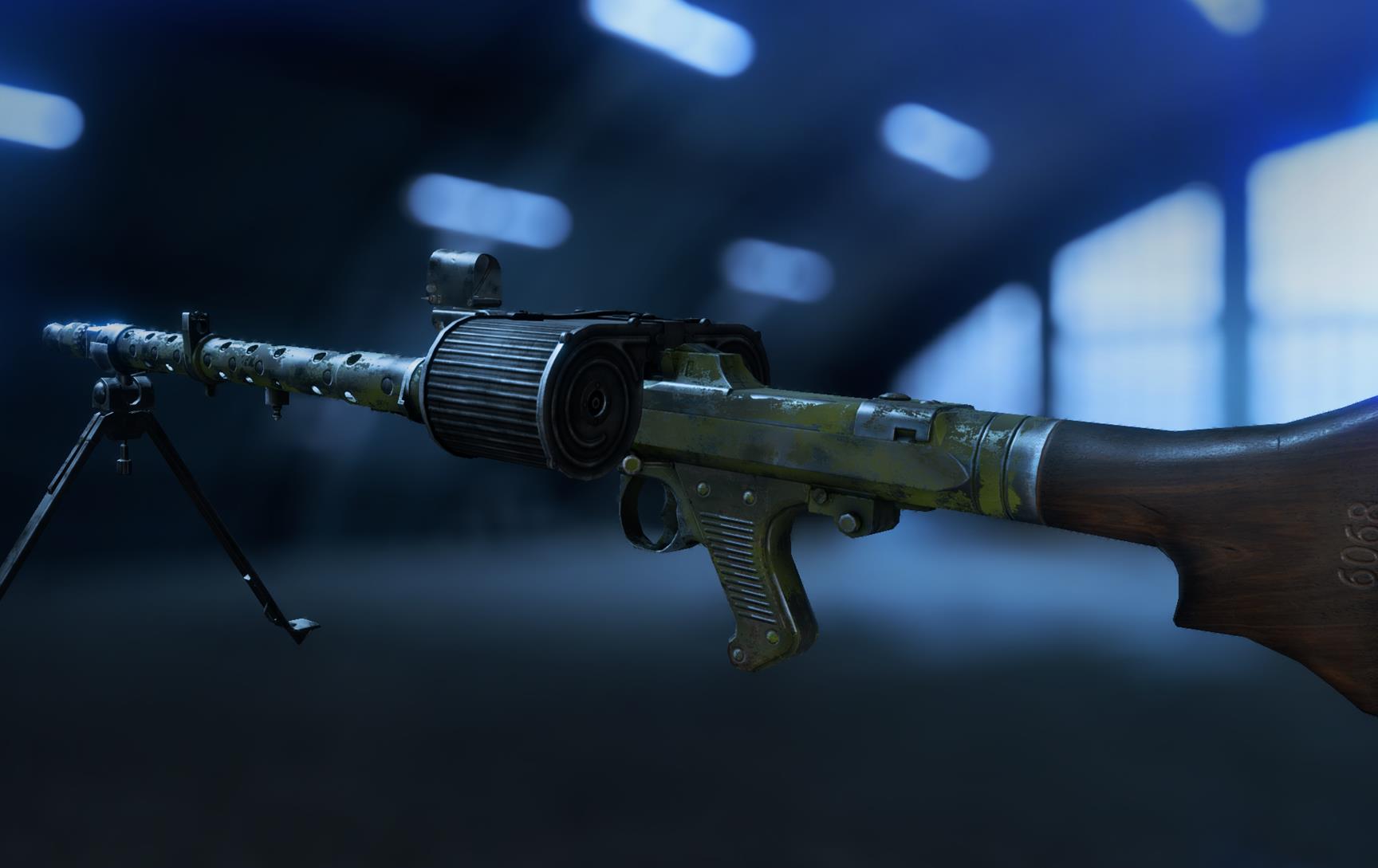 Once again, the first option earns our recommendation. No one can disagree about the stature of the MG 42, both historically and in video game culture, but you won’t have to fully level up the Support class to use the MG 34.

Indeed, the MG 34 won’t beat the MG 42’s rate of fire, but it more than makes up for it in accuracy. Going prone and hosing enemies with the MG 34 is incredibly satisfying. Yes, you’re an easy target for snipers, but you’ll be sending so many bullets down range and disorienting enemies that it’s worth the risk.

With the drum magazines, you won’t even have to put up with a long reload with the MG 34. For Specializations, pick High Velocity Bullets > Chrome Lining > Double Drum Magazine > Ported Barrel. This setup is perfect for stationery, bipoded fire, but you can go with Light Bolt if you can deal with the excess in recoil.

With the introduction of Combat Roles in Battlefield 5, the Recon class is looking more interesting than ever. It’s still the hardest to use, of course, because of its reliance on punishing, but very accurate weapons, but you can certainly see some action beyond the distant camping spots you may be used to. 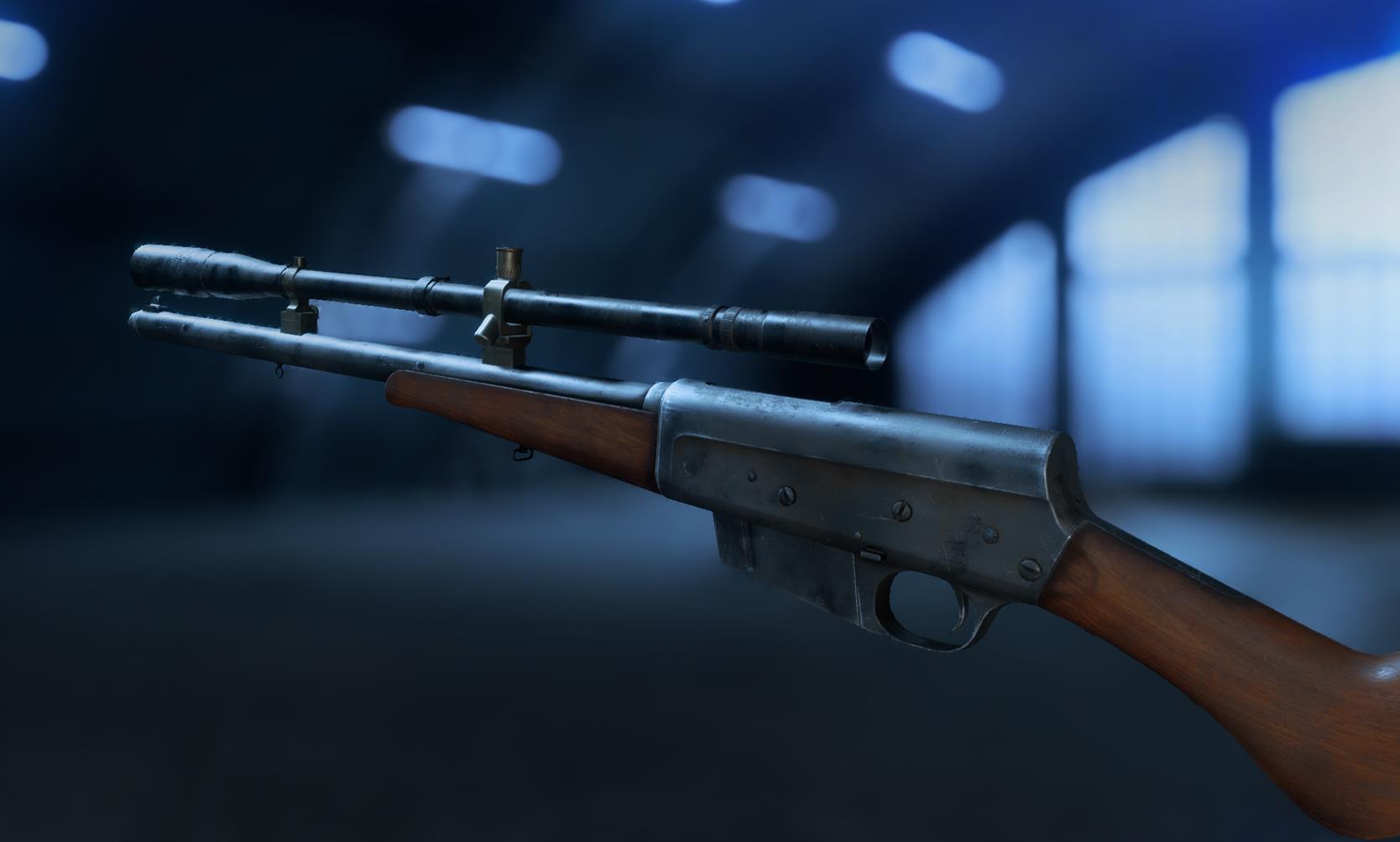 If you’re not interested in the extreme range responsibilities that come with holding a sniper rifle, play Recon with one of the self-loading rifles. In this case, the Model 8 stands above the rest.

These weapons all have terrible rate of fire, and the Model 8 is no exception. However, the Model 8 is able to up its rate of fire through Specializations while maintaining its supreme accuracy and better-than-average damage. This weapon is best paired with a 3x scope, but it can do well with the 6x when needed.

This is why it’s best to double down on its long-range role and go with Recoil Buffer > Quick Reload > Barrel Bedding > Lightened Stock. While it may be tempting to take Trigger Job for the improved rate of fire, it’s a minuscule increase that, while helpful, isn’t worth taking over improved aimed fire (which you’ll be doing 99% of the time), and the boost to the Model 8’s abhorrent reload speed. 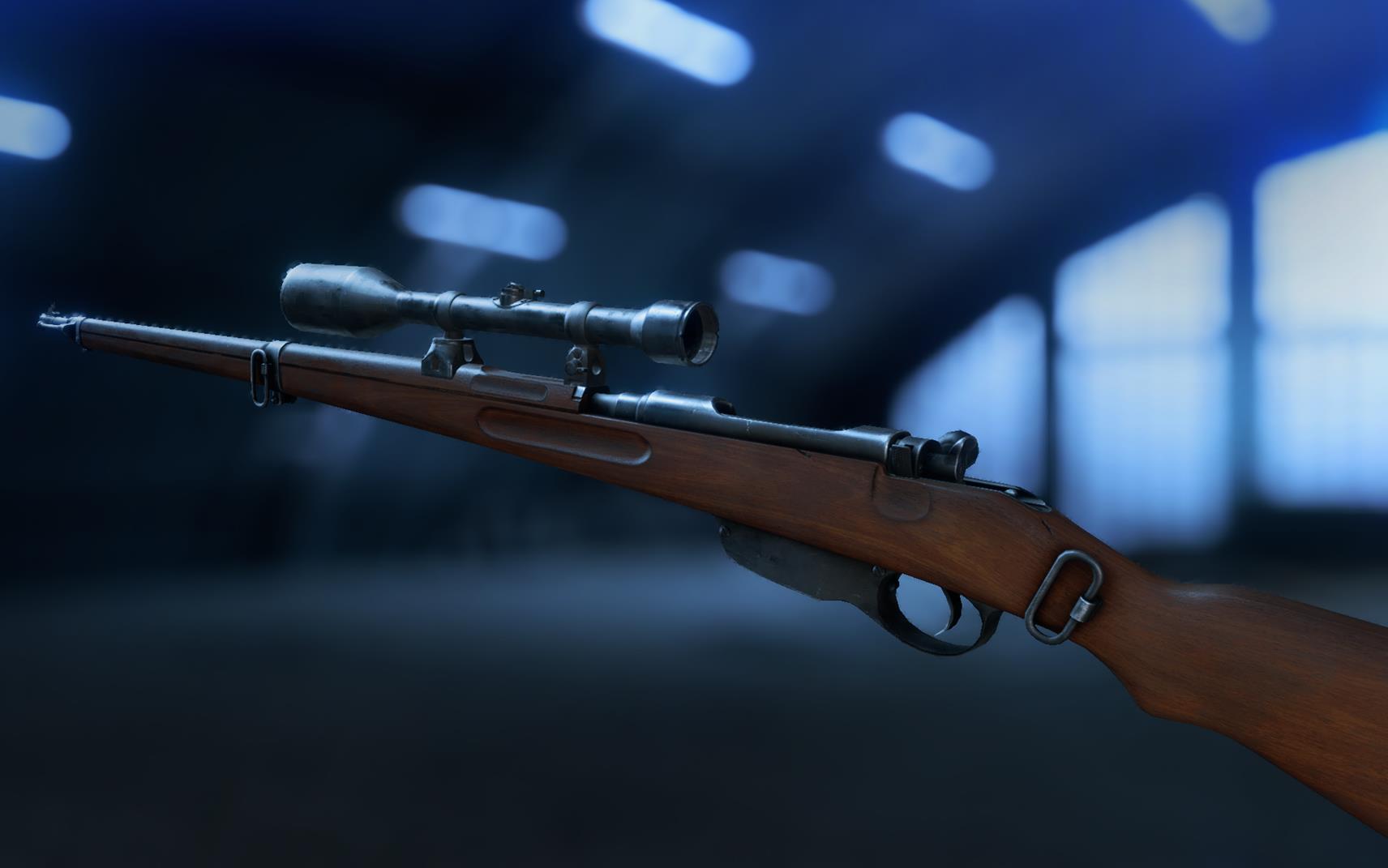 This may be the most subjective pick in this story, but that’s because sniping is not easy in Battlefield 5. Battlefield 1’s Sweet Spot mechanic is gone, so you’re back to, well, having to be accurate with every shot.

The Gewehr M95/30 offers a good middle ground between the ultra-fast rate of fire of the Lee-Enfield No.4 MK 1, and the high damage of the Kar98K. You won’t be able to spam shots with the M95/30 in the same way you would with a Lee-Enfield, but it toes the line well enough that it’ll let you get away with being an aggressive sniper, and won’t let you down when you want to hunker down.

If you don’t have the time to grind 20 levels of Recon to get to the Kar98K, stick with the Gewehr M95/30. The best way to play sniper is to overlook busy objectives. If you play your cards right, you’ll be swimming in one-shot kills. Many players will likely have taken some damage from the fight, which is more than enough for you to land the kill.

The Gewehr M95/30 works well with both the 3x and 6x scopes, but it does better with the latter compared to the Lee-Enfield. For aggressive Recons, we recommend picking Quick Aim > Custom Stock > Lightened Stock > Variable Zeroing (because the bayonet is useless on a sniper rifle. The same tree is also useful for Recons who don’t like to move a lot.

For more on Battlefield 5, be sure to give our general tips a look, and this guide to understanding everything about Assignments. For everything else, check out our ultimate Battlefield 5 guide.