Sombra is one of the most difficult Overwatch characters to master. She dies easily, and managing her abilities is like trying to rub your tummy, pat your head, and give a speech at the same time.

With an upcoming update, Blizzard is hoping to make her less challenging to use while also increasing her usefulness in more situations. Like any changes to the roster, however, Blizzard has met with a little pushback from the community for some of the more radical ideas being introduced.

“The Sombra changes, I was a little surprised with the feedback online where people thought it was an overall nerf,” lead designer Geoff Goodman tells me. “We gave her a lot of buffs and a lot of nerfs at the same time. The Sombra changes are a lot about giving her more flexibility in how she plays, and that flexibility gives her a lot more power.”

At the moment, on live, Sombra is very situational. Setting up a good play with her requires you to be in the right place at the right time, as well as your team being set up correctly, to get the most out of her abilities. You are also forced to constantly watch timers tick down on your abilities as you plan your moves. It’s a bit like spinning plates.

You also have to break line of sight to recharge your stealth in a safe spot before joining your allies in the fight when your plans do go wrong.

“It just seemed like this intense game of micromanagement and these timers, and you often have these situations where you slightly mistime something,” Goodman explains. “None of that is the fun of being invisible and shooting people and hacking people.”

The solution? Take those timers away completely and allow Sombra to be invisible indefinitely. She can’t attack or capture points while using stealth, but you can stand among a group of enemies unnoticed and wait for the precise moment to pop out and do some damage.

“The way it originally started, I was like, ‘How far can we actually push this invisibility?’,” Goodman remembers. “So we doubled it and tried that, but we was like, ‘Is this really much different to being infinite?’ Even though infinite invisibility sounds really powerful, you do need to come out and build your ultimate, harass them, hack the right targets. So we tried infinite on both the translocator and the stealth, to take those timers out of your mind so you can focus more on the timing of when you hack or do damage to people, and it was just so game-changing for her – the ability to stealth, get where you want and be in position.

“Because she’s so much about timing – you get that hack just as your team are coming in or you get that damage on an enemy Zenyatta just after he takes a sniper body shot. You can pop out because you’re right there, not waiting for your stealth to recharge. It’s so much more fun to play her this way.” 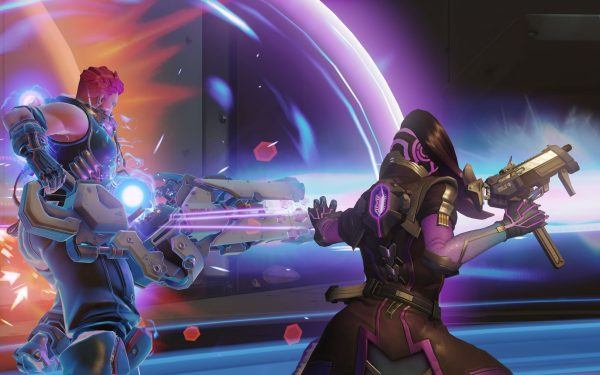 It might be fun to play as Sombra once the changes are live, but it also has to feel fair for the enemies who have to deal with this transparent foe. Luckily, nothing much seems to have changed from their perspective.

“She kind of felt the same, she just kind of pops out and does her thing,” Goodman says of playing against an enemy Sombra. “You don’t really get the feeling she’s been there the whole time – from your perspective she doesn’t feel hugely different or hugely more powerful. It was a win on that side too.”

Funnily enough, even though Sombra will soon be able to cloak indefinitely, much of the pushback came in response to another balancing change added in to make sure she wasn’t pushed too far.

“I kind of understand where some of the feedback is coming from, where they’re worried about how she moves a little slower now because she can stealth permanently,” Goodman admits. “It used to be more of a burst of speed. You still move a lot faster, you move 50% faster, but it used to be 75% faster, so some people are worried about those changes. But I think when people play her they will realise she’s a lot more powerful, more useful, and more flexible.”

You can also read our exclusive on the upcoming Torbjorn Overwatch rework, which gives him throwable, self-upgrading turrets.