Another Fortnite prop has arrived in the real-world, providing further evidence that Epic Games has a massive ARG underway.

Update: It turns out these llamas aren’t just in London. A report from PC Gamer has noted additional llama sightings in Barcelona, Cologne, and Warsaw. We will keep you posted with additional clues and sightings.

Original Story: Last week, a real-life Durr Burger prop from Fortnite was spotted in the desert outside Paldale, California. That would be entertaining enough, but the location also provided clues to a large-scale alternate reality game (or ARG) that shows no sign of ending soon.

Case in point: a real-life supply llama has been found in a phone booth in London, England. 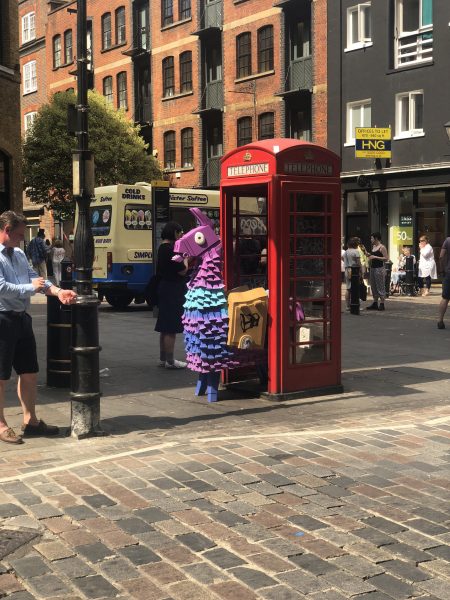 The above photo was uploaded to Reddit, where Fortnite fans are speculating where the next item will appear. On this point, Reddit user shiotohikari raised a fairly grounded theory:

“At the California site there is a burger, police car, and a tent,” the post reads. “The second audio file also gave the code C7. Well, if you look in game at C7 in Greasy Grove there is a police car, tent, and spot the Durrburger sign use to be. Right in the middle of all these locations (like the weekly battle star locations) there is a telephone booth.

“I do not think that is a coincidence. I also believe the clues they give us are just meant to tell us what their next prop will be and we just have to wait until they reveal it, unfortunately.”

In case you haven’t been following Fortnite news, this all seems related to a newly-formed in-game rift. This anomaly has been sucking up in-game items and (apparently) depositing them in our world. There are also time travel theories swirling about in relation to these props, but what it will all amount to is unclear.

Did anybody think of cracking the llama open for more clues?