Wargaming is seriously nerdy about tanks. From turret speed, to rate-of-fire and gun depression, everything about the vehicles in the studio’s flagship game – World of Tanks – is painstakingly modelled to make it as accurate as possible. Wargaming CEO Victor Kislyi even likes to say that World of Tanks is the greatest tank museum in the world.

It’s interesting then that the World of Tanks console team – based stateside in Chicago, IL at Wargaming West – chose an alternate history setting for their most recent trilogy of single-player PvE “War Stories”.

“The idea is, in 1942 the Axis didn’t make nearly as many mistakes as they did,” World of Tanks Console narrative designer Darold Higa says.

“So Midway didn’t decisively destroy the Japanese carrier fleet and Hitler was much more conservative in his advance into the Soviet Union. This twin factor extends the war. The US enters, but decides on a pacific-first strategy.

“Of course we couldn’t fit this into these three little vignettes or anything like that. But the idea is that we definitely wanted to extend that conflict, then as a result of that, people have to start making these moral choices.”

War Stories are exclusive to the console version of World of Tanks, which was built as a stand-alone game, rather than a port of the PC version. So while, in recent months, World of Tanks on PC has focused on overhauling its graphical offering with the 1.0 update, the console team have been free to concentrate on what they feel matters most to console gamers.

“Each platform does tend to have a slightly different demographic in terms of their audience,” Higa explains. “So this is something that is very, very important a console experience. And to do it in this free-to-play atmosphere that’s predominately a multiplayer game, we said: ‘this is what really rounds out that experience.’ 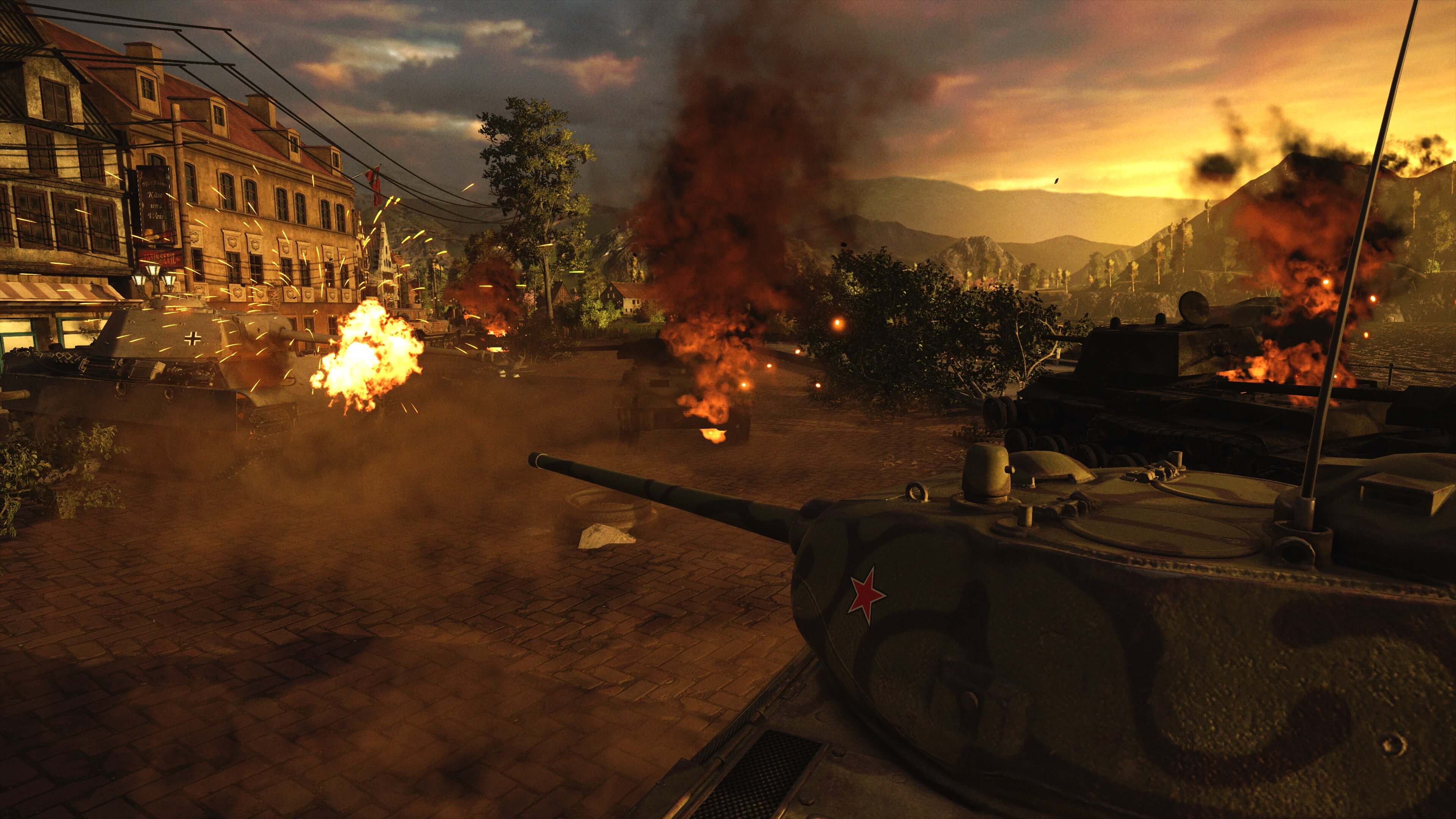 “I think the big thing for console players in particular is that console games are typically very in-and-out – I play the game for a little while then I’m done with it and move onto the next game.

“So for us the nice thing about doing something like War Stories is because new audiences have a way to come into the game without getting overwhelmed. I think for console players there’s a much bigger expectation that there’s a way to transition into multiplayer – for us it was really, really critical.”

Rounding out the World of Tanks offering on console was just one reason to choose alternative history, though. Breaking away from the nuts and bolts of real-life battles lets Wargaming West play around with nationality, setting, and time of year in ways the studio couldn’t with a straight retelling of actual events. Bolstered by strong feedback from internal tests, excitement at the chance to create a new story grew around the studio.

“If you know history really well – you’ve probably studied it ad nauseum and everything else – historical battles were never meant to be even,” Higa says. “If generals did their job, it was not an even fight. So the nice thing about alternative history is that we can throw in circumstances that might not be purely historical, but are good for gameplay.

“A lot of people can jump into a historical game without knowing any of the history, but for alternative history to make sense, you actually have to know the history and then seeing where it deviates is what’s interesting.

“I’m really into the idea of ‘this is the way history is, but I know it well enough that what if we just tweaked this and changed that’. If you’re a more traditional war gamer – moving units around on a board type thing – that’s what you’re doing all the time. The challenge is, ‘oh, I’m going to play as Germany during World War Two. If I did this differently, would I save Stalingrad?’

“That’s where the appeal of alternate history and narrative comes from, if I were there could I have changed something?”

As well as the obvious influences from alternate history authors such as Harry Turtledove, throughout the three new War Stories there’s a heavy movie-inspired theme in each of the episodes. The first, for instance, Sieben Ritter (Seven Knights), is loosely based on Akira Kurosawa’s 1954 classic Seven Samurai, and follows a squad of German soldiers who disobey orders to protect a town from approaching Soviet forces. With the release of a previous War Story, Runaway Tiger, at the end of 2017, Wargaming West had experimented with featuring a crew more prominently than the tank they piloted. The positive feedback the studio received for that episode encouraged Wargaming West to be more ambitious in its dedication to alternative history. 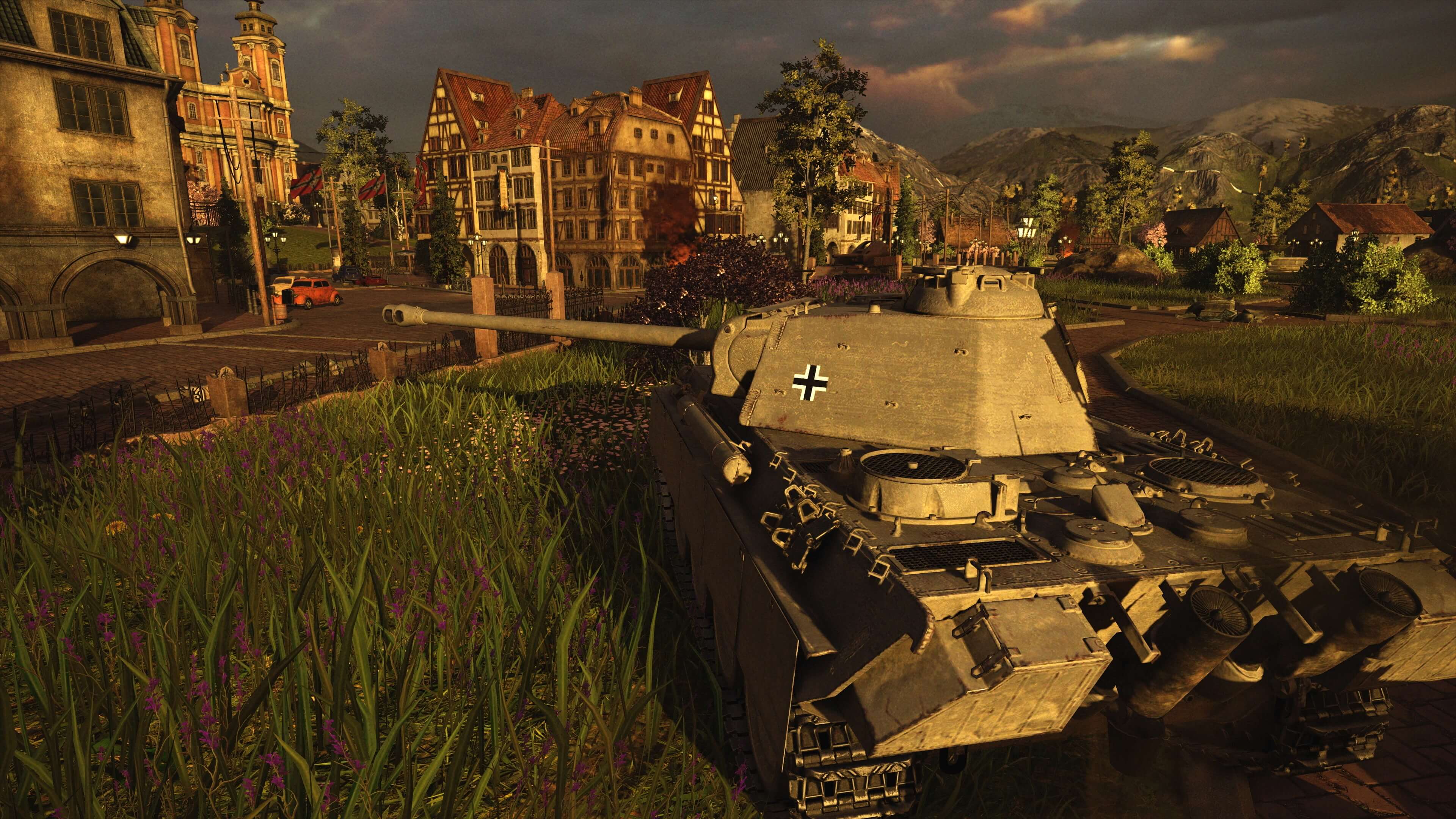 “That’s what leads us to this trilogy that we have going here. Because of that, we started thinking what are quintessential movies that personify some of these elements.

“The way that I explained it to everyone here was that we wanted to go with a premise that the war keeps going longer and longer and longer, and the armies start to fray because the discipline started to fall apart.

“Seven Samurai just seemed like the right kind of feel for it. Whenever we’re putting together one of these levels, it’s a very collaborative thing. I write something and send out the document, but then all the level designers and all the artists and tank designers have to turn that into something actionable. So I said: ‘In that case, let’s think of some framing principles,’ and that became the whole Seven Samurai idea that they’re going to protect this town against crazy odds.”

Rather than focus on a single story in the universe it had created, Wargaming West used the relatively short length of each War Stories chapter to show different perspectives from around the extended war. None of the protagonists are your archetypal “good-guys”, and grey morality is at the centre of every episode. This gave the team the chance not only to explore more nuanced moral choices, but introduce lesser seen characters as well.

“We arrived at a three character concept pretty early on,” Higa says. “Which is unusual – usually for our War Stories we have one character and we carry them through three chapters. But we really wanted to move around and see the story from multiple angles.

“We definitely have not really touched on either German or Soviet characters. So that was very important from my point of view, to inject that part of the story into this.

“But we also wanted to have characters that had these conflicting motivations. It’s really hard in just a few comic panels. These are things that we’ve been discussing internally. But when it comes down to it, we’ve got three panels – it doesn’t necessarily reflect that deeper narrative that we’re working from, but that’s what helps us inform how we design the levels, how do we design the scenarios behind them and everything else.” 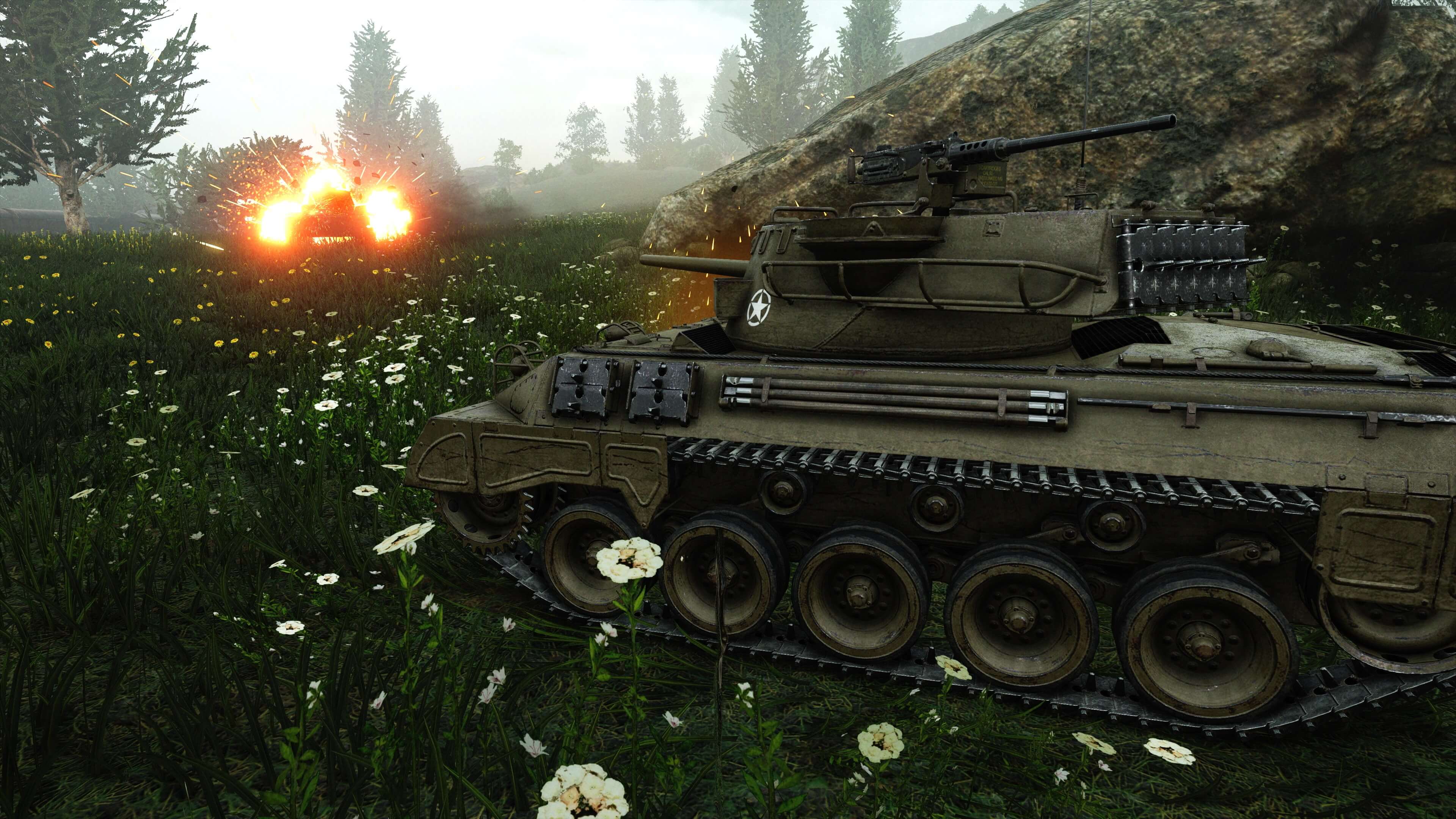 The degree of separation from actual events afforded by alternate history also lets the team to approach one of the most difficult issues in WW2 fiction – how to tastefully tell stories from a the perspective of a German soldier. This was a big topic of internal debate at Wargaming West, where they were keen to write a compelling narrative, without stripping away too much context.

“We’re always trying to figure out good ways to sensitively portray these things,” Higa explains. “That’s why you’ll notice that in this particular case, because of the theme of the story was that they’re not really following orders – they’re following their moral compass – that helps portray them.

“With the Soviet Union, that’s not so much of an issue and with America that’s not so much an issue. But I think with Germany, this was a very good case where we can have him be seeing and making moral choices and disassociate him from the military that he’s associated with.

“Movies can kind of get away with it, but with games I think that we have to be very sensitive. Not only are you watching actors on the stage, but you’re picking up the controller and acting as this.

“The reality is, whenever you’re playing one of these games you’re picking a side, and when you do I don’t think that many people think of it as making an active choice to advocate everything that side stood for. A lot of it is the whole idea of ‘what if’. ‘I want to play as the country I’m from’ – that’s great. Or ‘I want to play as the country that lost’, because that’s kind of interesting. I think people make those kind of choices with this, so we want to accommodate that without trying to offend.” 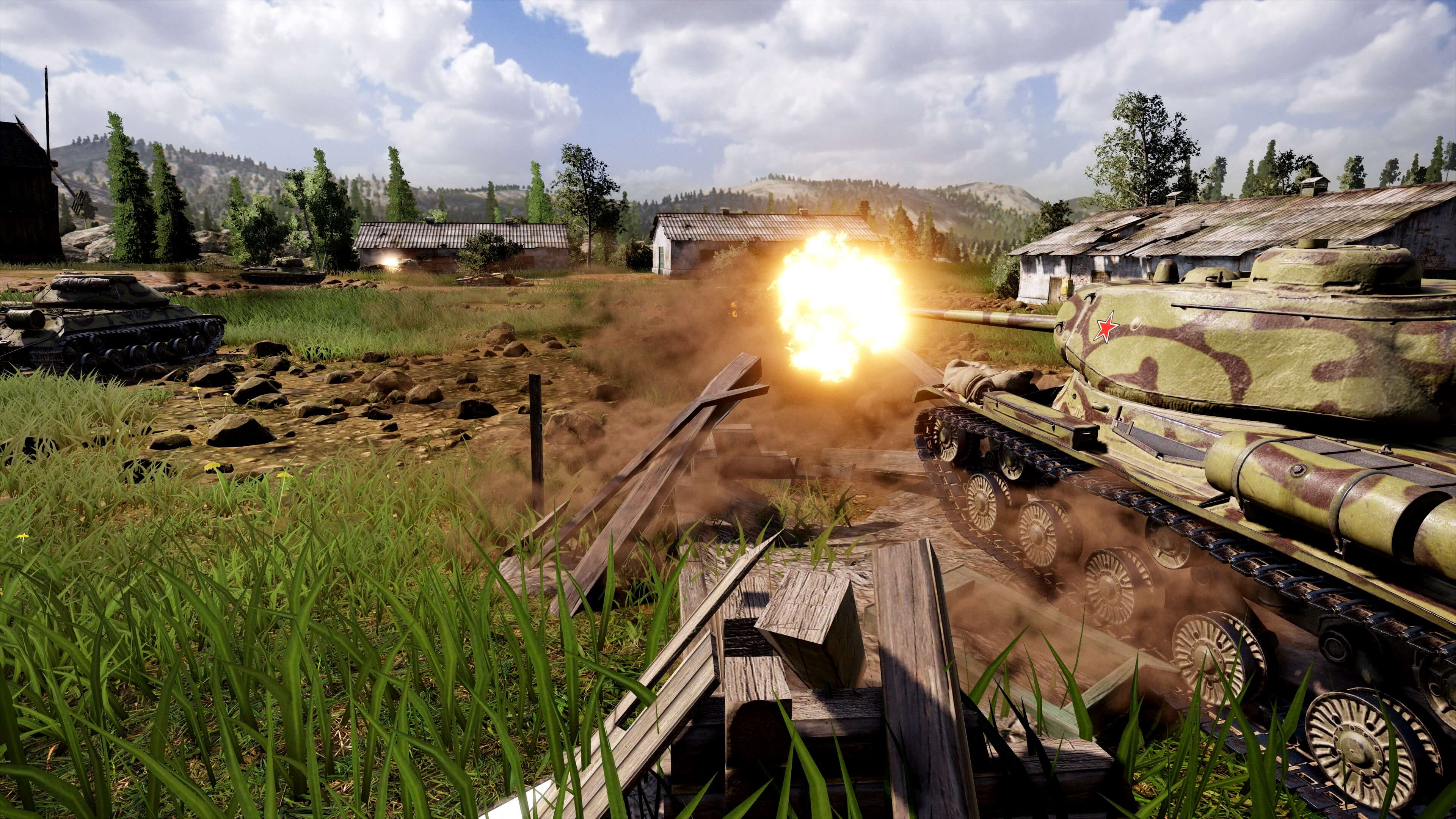 At the end of the day though, even with the work put into the backstory, the gameplay in these War Stories is all about driving tanks. Trying to personify these lumbering war machines was another challenge Wargaming West had to deal with. World of Tanks isn’t a hero-shooter, so the developers couldn’t give every vehicle a colourfully distinctive design so it stood out. So as not to diverge from history too much, the team had to emphasise the defining elements they had to make each tank feel unique.

“This is where the history as opposed to the alternative history is really important,” Higa adds. “One aspect is the pure historicity of the tanks. Some of them played such a critical role that they inherently have a natural character.

“When I go to a player event, within five minutes they guys who’re talking to me about tanks and gun depression will say, ‘I was just talking to my friend about World War Two imperial Japanese navy vs US navy damage control’. People are really into all aspects, and they dive into the minutiae. I think that kind of stuff adds to the character of all of these subtle details – what’s the rate of fire, which cannon is that – and all this other stuff. How does that make this individual tank play?

“That’s the character that we emphasise. We try to give you as many details as possible so you have a good sense of, ‘Oh the engine is there, that’s why if I hit there it causes these problems’.”