Although not an entirely new map, this update adds a significant number of new locations to the existing island, including the city Tilted Towers, Junk Junction junkyard and Shifty Shafts mine.

The intention is to fill out the map with new spots but also tweak existing locations such as Moisty Mire and Wailing Woods with more detail and vegitation.

Developer Epic Games put the new update live on Thursday January 18 after a short downtime for maintenance. It weighs in at around 1.6 GB.

The developer also revealed new screens of the locations to be added to the map, a short video, as well as all the patch notes for version 2.2.0. which can be seen below. 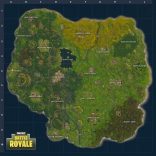 Fortnite is a survival shooter for Xbox One, PS4 and PC and is one of VG247 picks for the best free games on console.

It’s become one of the biggest games of the moment, with regular updates to the game keeping it alive. There’s plenty to learn about Fortnite, which is why we’ve answered the most common questions regarding what you pay for, why it’s not on Steam, and more.