The file size for the disc version of Monster Hunter World has leaked online.

As you’d expect, publishers put a game’s expected file size on the back of the box. This is the same for Monster Hunter World, the Japanese box for which has made its way online.

A picture of the back of the box shows a required space of only 16GB (via PSU), which is typically the size of betas these days and definitely well below other big-budget games. Here’s the image: 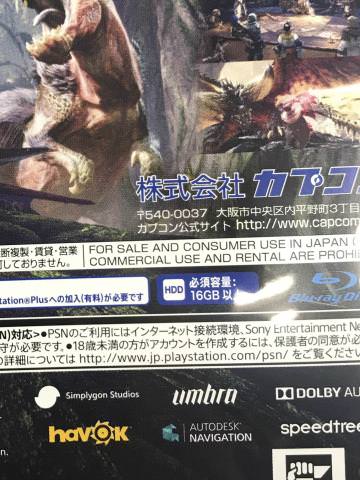 It’s worth noting that the size after install could be a higher, and the same goes for the digital version. Still, this is a good indication of where it’s going to be.

Just over a week from now, Monster Hunter World will have its third beta on PS4. It will be open to everyone, and it’s going to have all content from the previous beta, as well as new content in the form of the Nergigante quest.

Monster Hunter World then releases on PS4, and Xbox One on January 26. The PC version arrives some seven months later in the fall.