Starting in December and through the remainder of 2017, Star Wars Battlefront 2 players have plenty of free content and activities to look forward to.

The Last Jedi Season will bring with it new heroes, maps, vehicles, faction and weekend challenges, and even some daily challenges.

It all starts on December 5 when players will be asked to “choose a side,” by fighting alongside the First Order or the Resistance. According to EA, the choice is important, as it allows players to take part in “special challenges that will grant your faction specific rewards.”

On December 13, Finn joins the Resistance and Captain Phasma the First Order. Each can be purchased with in-game Credits that week. The winning faction which completes the most challenges that week will be handed a special Crate of high-power upgrades for Finn or Captain Phasma as a reward.

Throughout December, faction choices will continue to matter, and players will be able to see each faction’s progress reflected in-game. 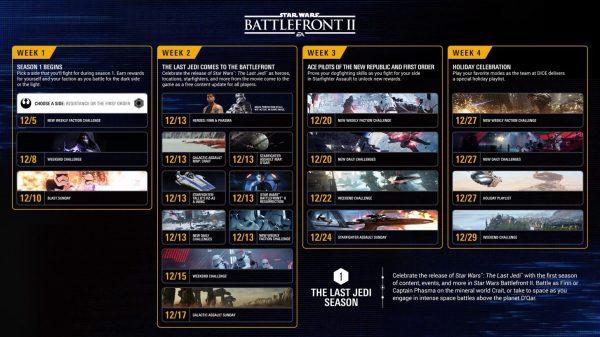 Also on December 13, new locations and vehicles will arrive alongside cinematic content from Star Wars: The Last Jedi and the new Crait planetary map.

The Starfighter Assault map of D’qar, the hero ship Tallie Lintra’s RZ-2 A-wing will also arrive as will Poe Dameron’s T-70 X-wing – upgraded with a new ability inspired by The Last Jedi.

Iden Versio arrives on December 13 as well in Star Wars Battlefront 2 Resurrection, which finds players joining the commander during “the days of the First Order’s rise to power.”

Star Wars Battlefront 2 is out November 17 on PC, PS4, and Xbox One. It unlocks on November 14 for Deluxe Edition owners. EA and Origin Access subscribers can dive into the game for 10 hours through the trial which went live yesterday. You can get a head start on things by looking over our Star Wars Battlefront 2 tips. It gives you information on the best class, explains Star Cards and loot crates, and more.