I’ve been pumped to play a ‘real’ level of Wolfenstein 2 for a while, and it didn’t disappoint.

Last month at E3 I got to play Wolfenstein: The New Colossus and absolutely loved it. It felt like it was going to be a great, strong escalation of the ideas expressed in the previous Wolfenstein reboot, and made it seem as though Bethesda is absolutely ready to continue their new domination of the single-player FPS kicked off by Wolfenstein: The New Order and DOOM. There was one little catch: it was a strange level.

You see, the first level of Wolfenstein 2 has you in a wheelchair. There’s video footage of this below if you need to see it – but basically you’re wheelchair bound, and so BJ’s movement is a little more sluggish and restricted than usual, though he’s no less deadly to the nazis than when he’s on foot. When I got to play a newer, updated build of Wolfenstein I had access to this level again, but crucially I also got access to a more traditional stage where you play on foot.

Let me set the stage: in this level from later in the game, protagonist BJ Blazkowicz is travelling deep into the heart of Area 52, which since the Nazi occupation of the USA has been taken up as a military base. BJ has strapped a nuclear bomb to his back and plans to deliver it deep into the base before scarpering and detonating it, thus dealing a deadly blow to the Nazi infrastructure. While this is a mission from a little deeper in The New Colossus, the set-up for the level sets the tone for the entire game nicely. There’s a military-style briefing with the resistance followed by a tense undercover stroll through a town and a close encounter with a Nazi that feels straight out of Inglorious Basterds.

The mission briefing is completed by a conspiracy theorist who accuses Blazkowicz of being a lizard man in disguise – and then story gives way to fast-paced, dual-wielding, nazi blasting action. You can see a lot of that below.

Honestly, I don’t have an enormous amount new to say about Wolfenstein 2. Everything I said at E3, where I called it “mad, brutal and brilliant” still stands after playing a level where I can actually walk around. Blazcowicz finds himself in a sort of Crysis-like suit of armor to assist him in battle and presumably help him to walk again so quickly, and so that actually means he moves more quickly and can jump higher and move further than ever before.

All of this leads to slick, fast-moving combat that’s an absolute joy to get stuck into, and that then combines well with the more non-linear level design with multiple paths through different areas, be that choosing which way to circle around enormous chamber-like rooms or choosing between crawling underneath a train to sneak behind enemies versus charging through narrow train corridors with assault rifles like that classic train level in GoldenEye.

I really enjoyed my hour and a half with Wolfenstein 2, and I’m now even more pumped for the final thing than I was at E3. 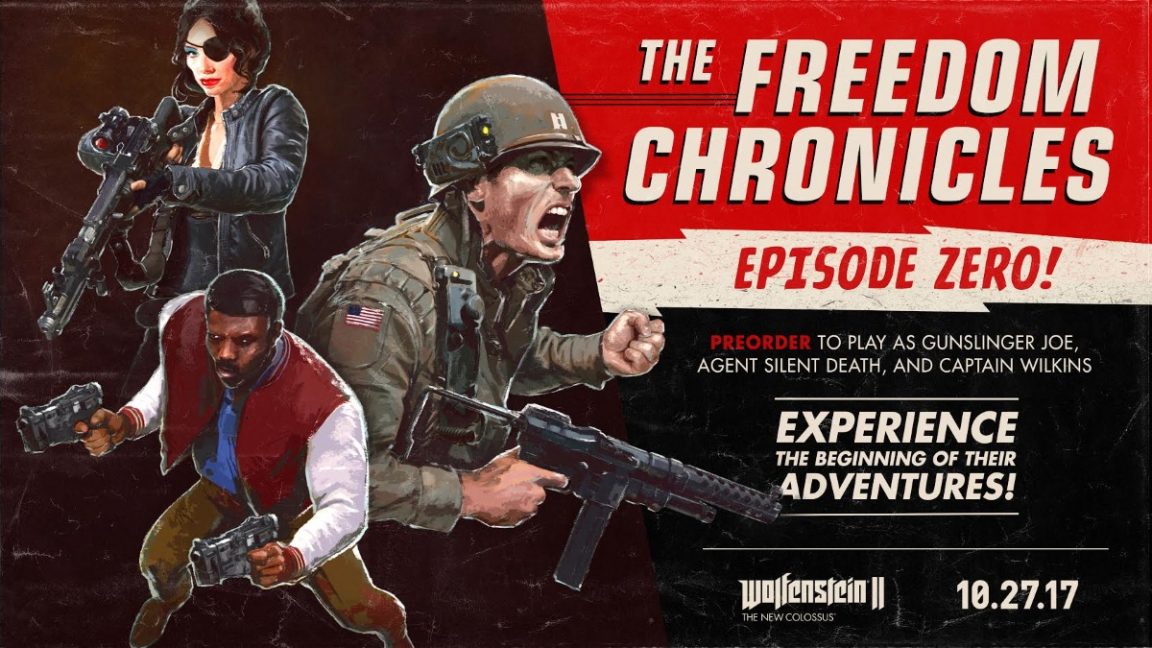 In addition to our new hands-on, Bethesda also revealed a little about the Season Pass for Wolfenstein 2 – The Freedom Chronicles. It’s a one-time purchase, but here’s the gist: for buying, you’ll get access to four DLC packs, each focusing on a unique new character (Former American Football player Joseph Stallion, ex-OSS agent Jessica Valiant and army hero Captain Gerald Wilkins) with their own story and abilities as they try to take down the nazis. There’s one pack for each character, plus an ‘episode zero’ that introduces all three of them properly.

Episode Zero will be available as a free bonus for everyone who pre-orders the main game, but it’s also included as part of the season pass if pre-ordering isn’t your thing.

Wolfenstein 2: The New Colossus releases on October 27 for PC, PS4 and Xbox One.