Microsoft announced its fourth quarter and year end results for 2017, and while hardware revenue declined, revenue from Xbox software increased.

During the fourth quarter for the fiscal year ending June 30, 2017, gaming revenue increased 3% to $44 million thanks to strength in Xbox software and services, which helped offset the 29% decrease in Xbox hardware revenue.

Xbox software and services revenue increased 11%, primarily due to a higher volume of Xbox Live transactions. The Xbox hardware revenue decline was due to lower prices and a decline in volume of consoles sold. 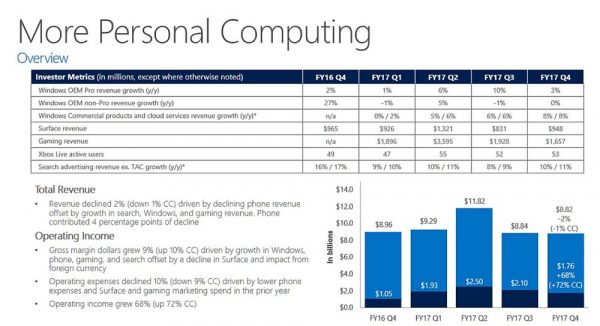 >Xbox One consoles and software are housed under More Personal Computing, and revenue for the sector was $8.8 billion for Q4 FY17, which is a 2% year-over-year (yoy) decline. However, this was attributed to lower phone revenue, which is also included in the sector.

A call to investors will take place this evening, and if any interesting information comes out of it, we’ll be sure to tell you about it.