War Within The Cartel pack up for grabs for any Amazon Twitch Prime members. 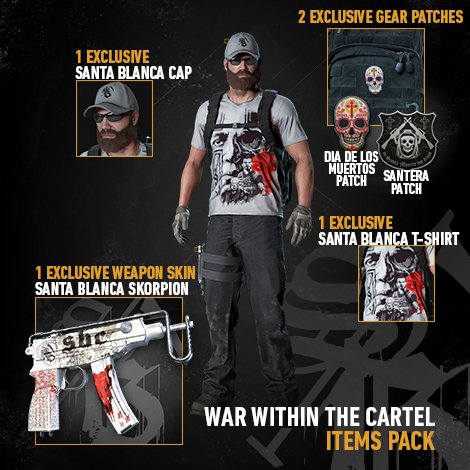 Nothing says “badass” more than strutting around the jungle wearing skulls and blood splatter. That’s badassery 101.

So if you’re buying Ghost Recon: Wildlands next month you’ll be pleased to know that if you have a Twitch Prime (or Amazon Prime) account you’ll be getting this verifiably badass War Within The Cartel skin pack for free. Free!

The exclusive pack includes two patches, a Santa Blanca cap and t-shirt, and the Santa Blanca weapon skin for the Skorpion.

We’re not entirely sure when you’ll be able to grab the skin, but as a first step make sure your Twitch and Prime accounts are connected in time for release on March 3.

Now go forth and fuck up some drug lords.