Rime resurfaces, and does so in a gorgeous, smart and focused state. 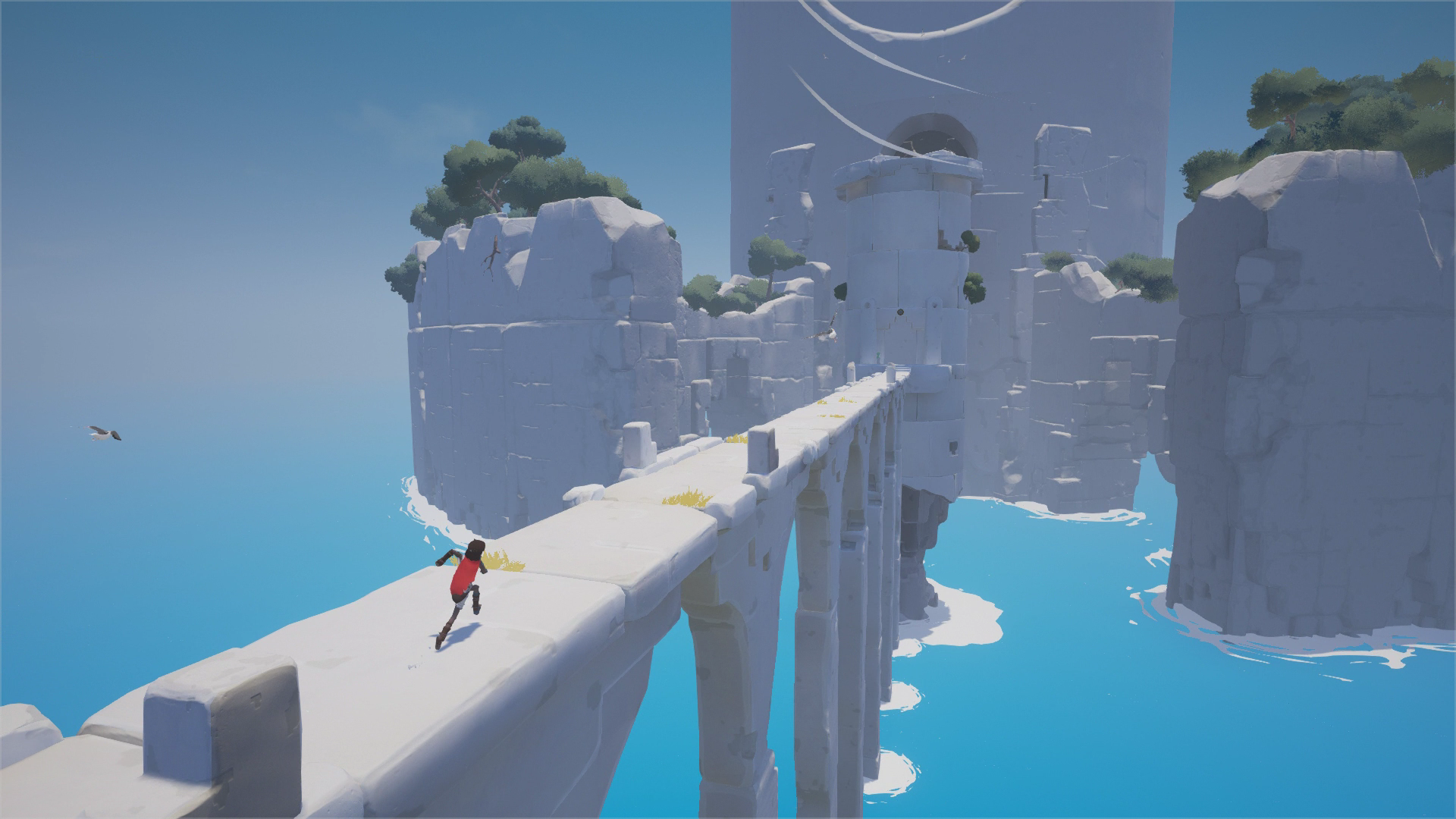 “Everybody always wants to compare,” says Raul Rubio, co-founder of Tequila Works and director of Rime. “And that’s fine, it’s flattering,” he quickly adds, though one also gets the sense that this is a topic that provokes mixed feelings for him and his team.

Rime has been compared to other games a lot. It’s also a game that keeps good company in terms of what it’s compared to. Its beautiful art-style is compared to The Legend of Zelda: The Wind Waker, while its young protagonist is rightly compared to Ico. Something of the game’s energy seems to channel Ico, too, though then there’s a more recent touchstone that actually released a good while after Rime began development – the bright colours and challenging puzzles of The Witness.

“This is Rime. No HUD, no combat, no voice over, no quests or pestering NPCs – just a boy and a beautiful world, with lessons taught to you through clever visual design and contextual inference.”

I played Rime for a few hours and yes, all of these comparisons are accurate. It is, as I note to Rubio, damn good company to keep – but I also see where that little grimace at the comparison comes from – Rime feels like a great deal more than that besides.

Rime has been a long time coming. When it was first announced four years ago it was a PlayStation exclusive title, and back then it was a very different game. In some ways it resembled a survival game, with a mostly open world to explore and the need to do things like find food to stay alive. Things changed. Almost everything changed, in fact – all the things I just mentioned are no longer true. When I played it last week, Rime was a rather different beast indeed – but it might be a perfect example of how sometimes less is more.

The opening of Rime sees its protagonist wash up on a beach in a strange world, and little other context is provided. This is deliberate: the game takes a hands-off, light-touch approach to story in order to let players interpret their own meaning. Slowly you’re eased into the world, and the basic loop of Rime’s gameplay becomes clear: encounter an area with clear paths you need to take, then solve puzzles in order to progress. 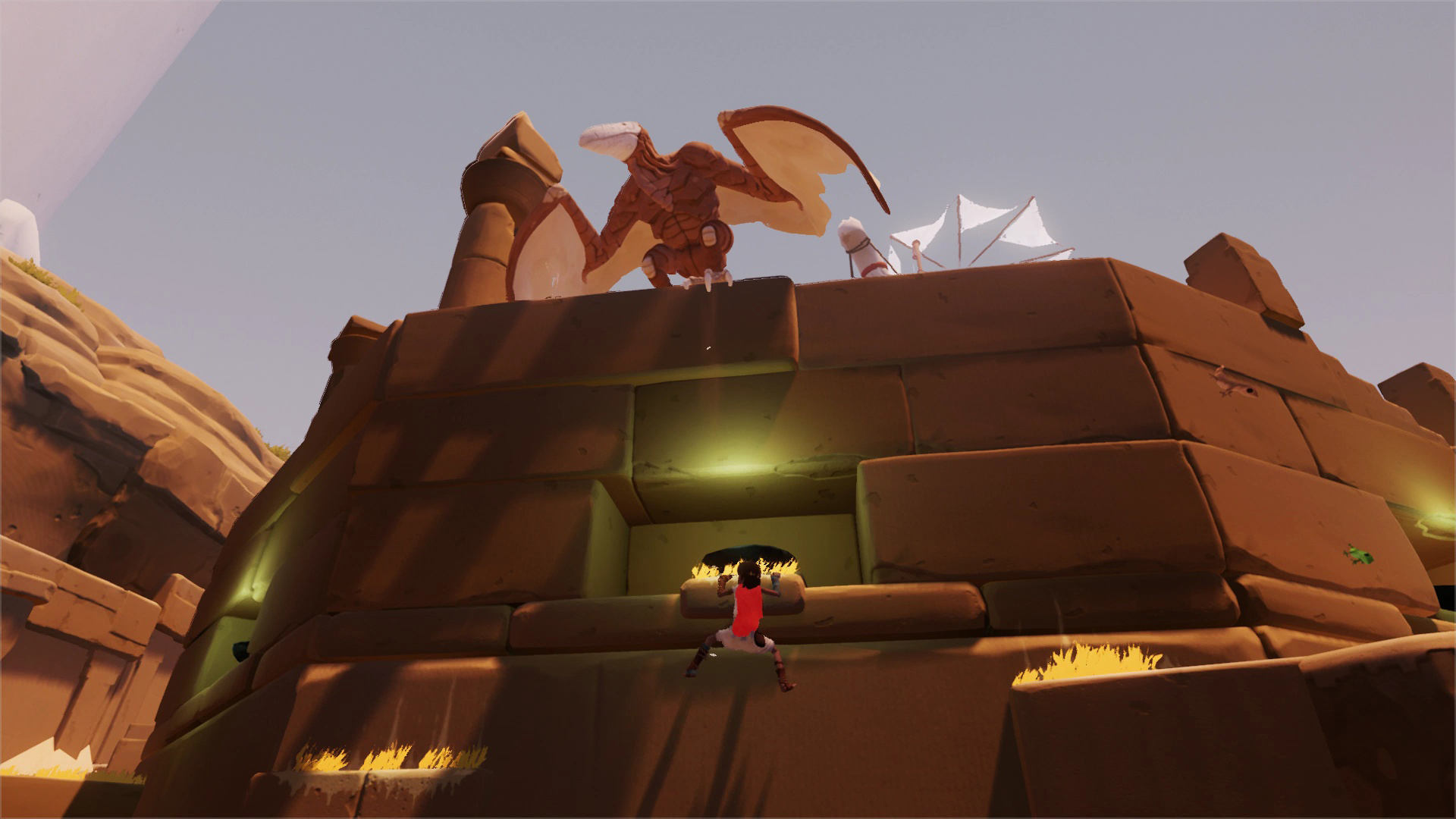 This is Rime. No HUD, no combat, no voice over, no quests or pestering NPCs – just a boy and a beautiful world, with lessons taught to you through clever visual design and contextual inference. It’s refreshingly focused. Occasionally a little fox will appear in the distance as a hint system of sorts – if you’re lost, look for and follow the fox. Other than that, you’re left to your own devices. The boy can climb, run, drag objects, hold objects or shout. The world reacts to these simple inputs.

As for narrative, the game doesn’t seem to offer much of a reason for why, but more asks why not? The island itself and your appearance there is just another puzzle to unravel, though getting to that point will require you to unfurl a great many other puzzles along the way.

I’m a big fan of these sorts of games – I loved The Witness, and there is definitely a comparison to be made here, even if it is a little reductive. There’s less a similarity in the style of puzzle (those I played represented a typical Zelda dungeon puzzle far more), but definitely a similarity in the ebb and flow of Blow’s puzzler in how the game encourages you to explore your way into a dead end and then think your way back out of it while layering on abstract and curious story elements.

“The game encourages you to explore your way into a dead end and then think your way back out of it while layering on abstract and curious story elements.”

Some puzzles are obvious to me, some make me sit and scratch my head for a while, and some I accidentally stumble into the solution to. Rime feels to strike the right balance between these areas, but it’s always difficult to exactly know where a game like this stands on that front until you experience the whole thing start-to-finish. At this event, I was limited to two levels. I mentioned earlier that the open structure was replaced by a more typical level structure, and that’s another change Rime absolutely, confidently owns.

Each of the levels I played had a completely different tone and style. The first is bright and wide-eyed with exploratory wonder at rustic towers and other abandoned structures. The only other life is an occasional puzzle-crucial pig or two that you can herd about. The second level is darker – not just in tone, but in its entire colour palette. Everything has shifted, and as the level opens you stand atop a sort of altar surrounded by petrified stone figures. Just what happened here…? Later, similar figures pop up in a desert but not petrified. They look sinister, but run from you in fear. What could have them so scared of a young boy half their size? These mysteries are layered atop each other repeatedly. 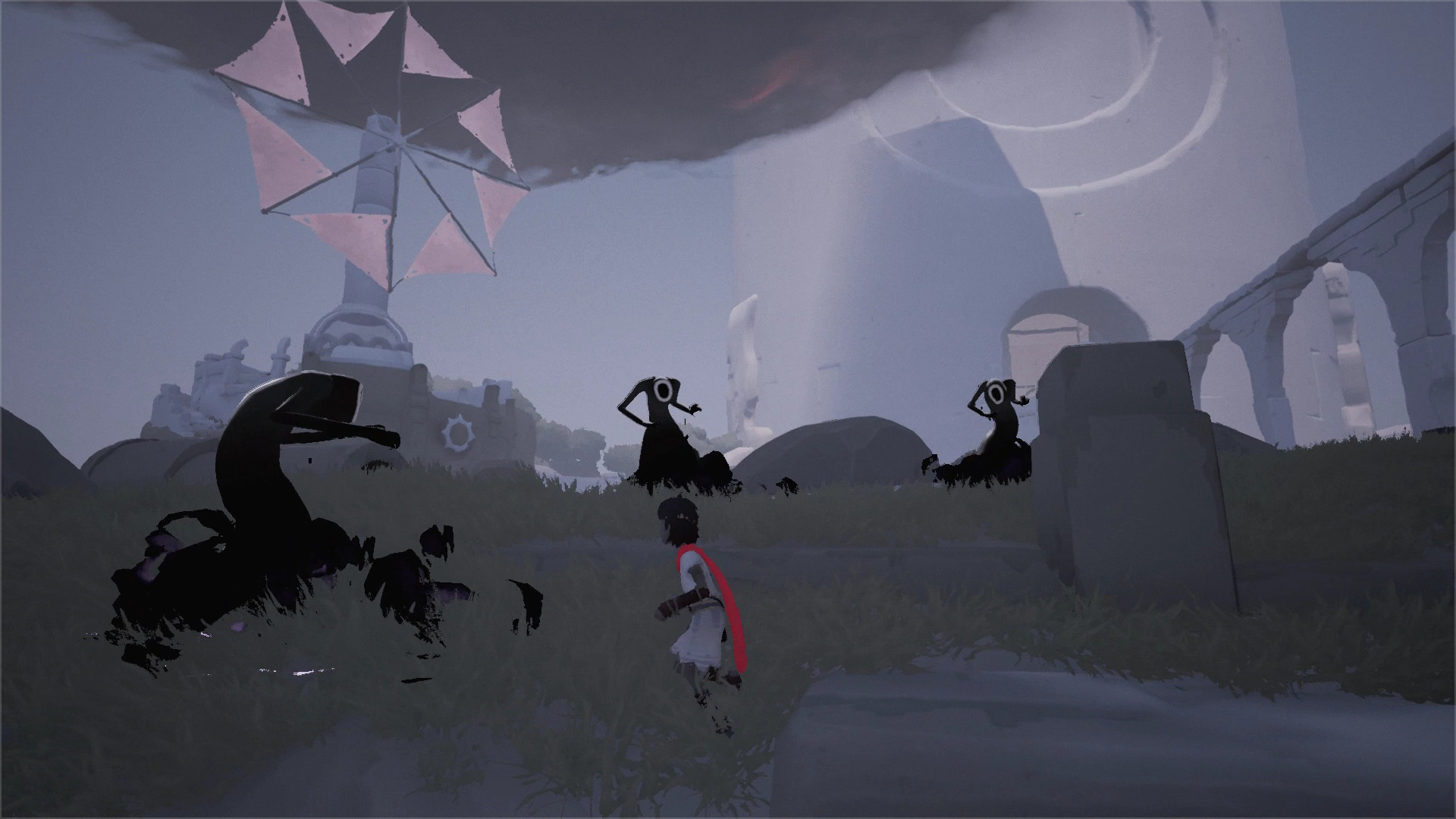 The second level also contains the first real threat other than a mistimed jump – a bird that wants to snatch you up and requires you to hide from it while still solving puzzles. There’s pressure added, a time constraint to your actions, but Rime still retains its relaxed tone – it doesn’t seem to have a concept of Game Over, but just sets you back to safety so you can try again. Ancient-looking murals give you clues on how to strike down the bird, and just when the level seems to be hitting a predictable stride of ‘activate towers to take down the bird’, you’re funnelled to water and encouraged to dive where a whole other world opens up impressively before you.

“The puzzles are fun and intuitive, but that actually came second at this hands-on. Far more important was the sense of discovery it managed to deliver on a couple of times in as many hours, a sort of rare, unbridled joy that few games can match.”

The feeling I got off seeing the fact that there was a whole new world underwater rather sums up what has me so excited about Rime in general. The puzzles are fun and intuitive, but that actually came second at this hands-on. Far more important was the sense of discovery it managed to deliver on a couple of times in as many hours, a sort of rare, unbridled joy that few games can match. Here the comparison to Ico and Zelda makes sense: they’re other games that can make me feel that way.

With a puzzle game, a big question is how its gameplay evolves and how much a chance it stands of keeping a player engaged over an extended period of time – two hours of puzzle mechanics are easy, ten hours of them are not. Many games break this up with combat or other mechanics, but Rime seems focused on remaining pure. That focus seems to be one of its greater strengths, so hopefully it pays off. For now, at least, Rime has rocketed up my most anticipated list for the rest of the year.

Rime is releasing for PC, PS4, and Xbox One in May. A Switch version will follow at some point later on.

This preview is from a promotional trip to Tequila Works to see their work environment and play the game. Travel and accommodation were paid for by the publisher.