Grab a kid and head for McDonalds.

Nintendo has teamed up with McDonald’s to bring Super Mario Happy Meal toys to the UK for the third year running.

The Super Mario themed toys made their first appearance back in 2014, and this year, there are four sets of toys making the rounds over the next four weeks, as confirmed by Nintendo Life. 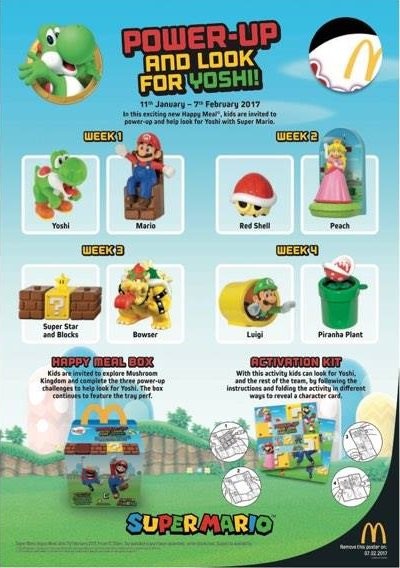 The toys are rolling out this week on January 11, and Mario and Yoshi are kicking things off. Peach and a Red Shell make their debut next week, followed by Bowser and Super Star and Blocks the week after. The last week is of course Luigi, and a Piranha Plant.

There are various activities included in the meals, so after you’ve bought a couple and ransacked them for the toys and food, you can give the greasy remnants to any children you know to keep them entertained as you arrange your new Super Mario diorama.