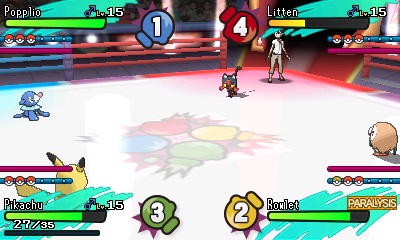 Yesterday we pushed a review of Pokemon Sun & Moon where I referred to it as the best Pokemon game in years. It really is – it feels bold and adventurous but also very respectful to the larger lineage of the Pokemon series. It’s well worth a look.

One of the things that makes Sun & Moon so special is its scope. Our review wasn’t exactly short, but we still had to refer to some major features in the game in the most passing of ways. There’s a lot to do in Alola, and some features such as Poke Pelago, QR code scanning and the nitty gritty of multiplayer passed our review with little more than a mention that they were pretty decent and nothing to worry about.

“The simple twist is that it’s a free-for-all: it’s every player for themselves with a points-based scoring system.”

One of those features is actually in my eyes quite a bit better than that, however – Pokemon Sun & Moon’s new four-way multiplayer battling mode. It’s called Battle Royal (the game for some reason stresses that spelling, not Royale) and it seems like an incredibly smart twist on the Pokemon formula to allow more players to get involved in exciting and unpredictable multiplayer action.

The typical format for Pokemon Battles competitively is 1-on-1 versus matches where each player sends out two Pokemon at a time. Battle Royal is unlikely to replace that thanks to its four-player format, but I think for casual play among friends it could become a new standard.

The performance is rocky even on the New 3DS with four Pokemon and their trainers all on-screen at once, but the mode still moves quite snappily and is a lot of fun to play.

Nintendo hosted a multiplayer get-together at their UK office while press were working on their reviews. I very nearly didn’t go along (it’s very busy for games now, as you all know) but I ended up hugely glad I did – it was a hell of an experience, and if I’d skipped it I’d have struggled to see completely just how Battle Royal can be one of the most raucously fun new parts of Sun & Moon.

Here’s how it works: Four players choose three Pokemon each and enter a four-way arena. No items are allowed, but strengths, weaknesses, weather and all that sort of thing work exactly as they do in regular Pokemon Battles. All Pokemon are balanced out to one equal level, but the simple twist is that it’s a free-for-all: it’s every player for themselves with a points-based scoring system.

The match ends when one player has all of their Pokemon knocked out, and at that point the player with the highest score wins. You gain points by knocking out any other player’s Pokemon.

This leads to obvious strategy and excruciating nerve-wracking moments. Players all select their moves of choice for a turn at once, and you’re at the mercy of Pokemon speed stats to see who goes first. There’s nothing worse than having what would be a knock-out blow and thus a point stolen by a faster player, and likewise nothing better than stealing away a KO after another player did most of the damage. That satisfaction is even better when you’re not even attacking with weaknesses.

It’s also hugely painful to select a move that’d be a killing blow but have it blocked by a defensive player, but similarly satisfying to avoid a load of damage when you know you’re the match’s number one target. 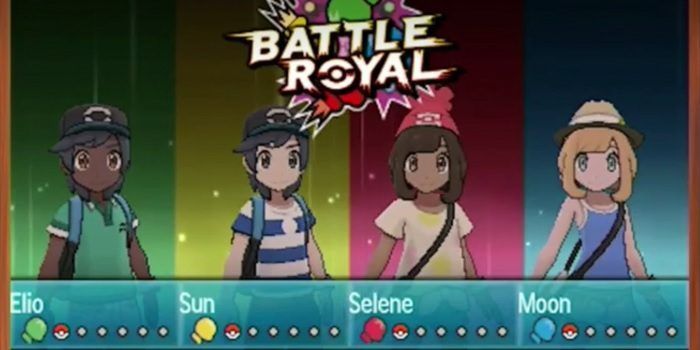 Additional layers quickly emerge. Moves like Protect become vital ways to shield yourself, especially when you reach your last Pokemon. Even if you’re leading in score if you’re the player to be knocked out completely you then can’t win and it passes to the next highest score, so a few times I found myself desperately trying to cling to life with my last Pokemon because if somebody else dropped first I had the highest score. That score was also an incentive for other players to gang up on me, though – a wrinkle only possible in this kind of mode.

“People were calling out each other, cackling and teasing as Pokemon were taken out of the fight. People would bemoan they were being picked on but then extract equal glee in doing some picking on of their own. I had a great deal of fun with it.”

This all led to some amazing multiplayer sessions with my little multiplayer group of press. People were calling out each other, cackling and teasing as Pokemon were taken out of the fight. People would bemoan they were being picked on but then extract equal glee in doing some picking on of their own. I had a great deal of fun with it – more fun than I’ve had with Pokemon multiplayer in many games.

I realize that there are people out there who love the more basic format of Pokemon battling and those modes even support their own little eSport industry. Battle Royal isn’t going to dent or take over those kinds of matches for those sorts of players in their pursuit of competitive Poke-battling. This isn’t a mode designed for such clinical battles.

For a bit of fun among a larger group, however, it strikes me as particularly special. In my couple of hours toying with it the mode fostered a party-like atmosphere that makes me more keen than ever to build up a solid Pokemon team and get stuck into some multiplayer – and that’s a victory for Sun & Moon.