Legendary Pokemon Reshiram and Zekrom will be made available for Pokemon Sun and Moon, and Ultra Sun and Moon players starting October 5.

The Pokemon Company has announced when players of either edition of Pokemon Sun and Moon can grab a code for either Reshiram and Zekrom from the Unova region.

Reshiram is a Dragon/Fire-type while Zekrom is a Dragon/Electric-type Pokemon. Both are part of a trio including Kyurem created during the war plaguing the region.

Pokemon Ultra Sun or Pokemon Sun players will be able add Zekrom to their game. Pokemon Moon and Ultra Moon players will receive a code for Reshiram. Stats for each Pokemon are posted in the image below. 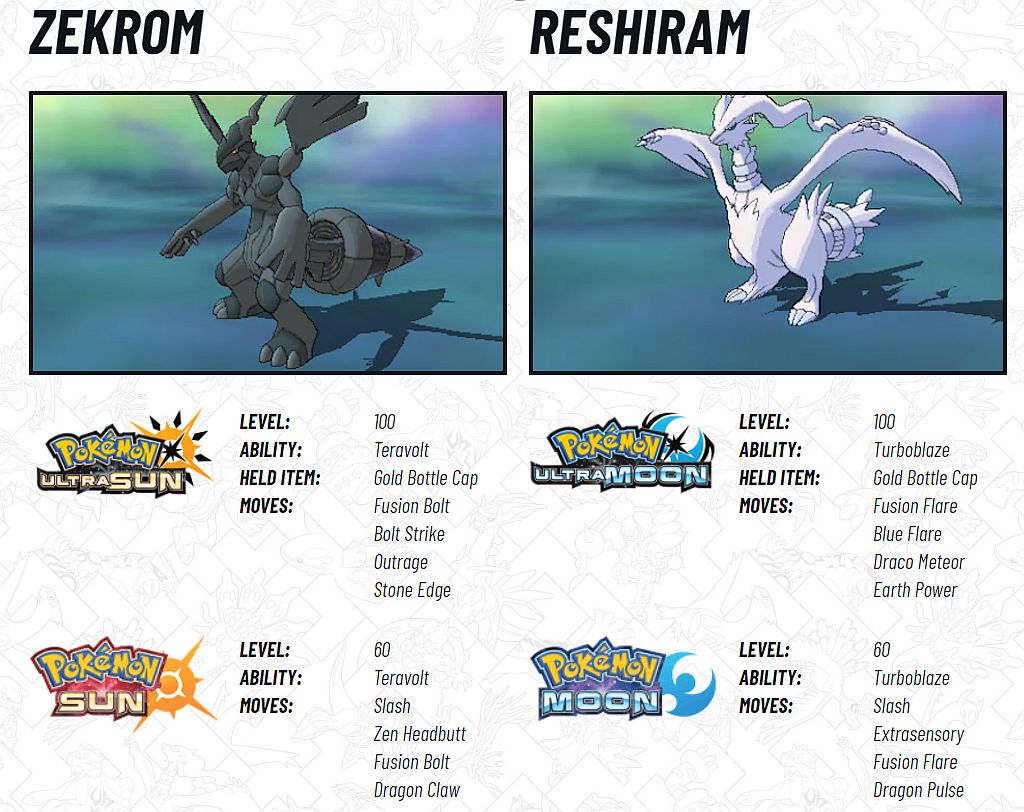 How to get Reshiram or Zekrom for Pokemon Sun and Moon

Residents in the UK and Europe can download a code through the Nintendo Network October 5-21.

In the US, Pokemon players will need to visit their local Target store to grab the code October 19-28. A code will be included with the monthly Trainer Club Newsletter in Canada.

The next and final distribution will occur in November with Fire/Flying-type Ho-Oh or Psychic/Flying-type Lugia.

Previous 2018 Legendary distributions for Pokemon Sun and Moon were: Latias and Latios in September,  Kyogre and Groudon in August, Thundurus and Tornadus in July, Shiny Zygarde in June, Xerneas and Yveltal in May, Entei and Raikou in April, Regigigas and Heatran in March, and Dialga and Palkia were handed out in February.

Pokemon Ultra Sun and Ultra Moon players can also collect their very own Mythical Zeraora this month. In North America, GameStop stores will hand out codes October 19 through November 9. UK residents should visit their local GAME from today through November 15.