Street Fighter 4’s sadistic SIN agent is back, but she’s missing an eye and carrying a load of new special moves. 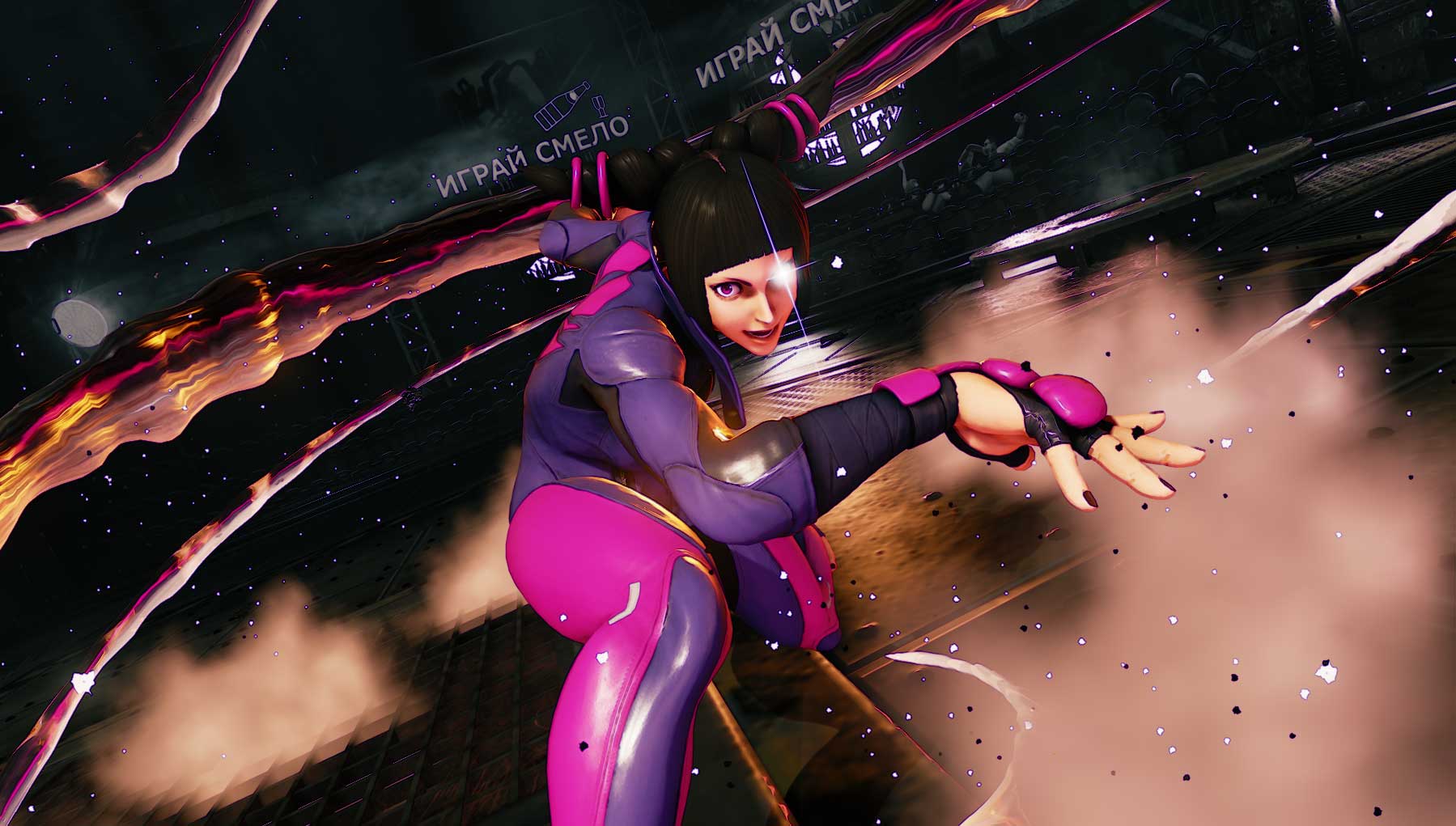 Of all the characters added in the Street Fighter 4 series of games, Juri is probably the one that caught the fan attention the most. She’s back in Street Fighter 5 with the same sadistic attitude she had before but with an almost entirely different and nearly unrecognisable move set.

Juri is a character that’s designed to rush-down, getting in the opponent’s face and not giving them any time to breathe whatsoever. She has strong tools for getting in, solid pokes and a V-Trigger that in the right hands powers up and makes her a terrifying one-touch-to-death character – though this is balanced out by special moves that have specific and limited utility and a fairly high execution level.

Pressing and holding the V-Skill buttons will charge up the Kasatsushu, Juri’s V-Skill. Once charged for a moment, releasing the buttons will rush at the opponent, passing through them to kick them from behind. You can cancel out of the charge stage of the move by dashing, meaning you can fake opponents out with it. This move has ‘levels’ of charge (most easily noted by the swirling dust and smoke around her feet), and cancelling out of a semi-charged version of the move retains the charge, meaning you can unleash it with a tap of the V-Skill button again.

At a long distance the fully-charged version of this move can also go through fireballs, but it has quite a start-up, so be careful how you use it.

Returning from its role as one of her Ultra moves in Street Fighter 4, Juri’s Feng Shui Engine sees her rip off her eyepatch and unlock her true abilities. This means she can cancel every single one of her special moves into each other – and that goes for airborne attacks too. Other properties, such as those of her forward and back dashes, also improve.

Also notable is that in this state all the Fuharenkyaku (Fireball Motion with Kick) moves come out in their ‘charged’ state immediately without needing to build a charge. More on how that move works in the next section.

This move is a little complicated, having three variants that are significantly different. Each time the move opens the same way – Juri swings her leg upwards with a swish of energy. This is a useful tool to eliminate fireballs – time it right and the small shimmer of energy in front of Juri’s kick will absorb your opponent’s projectile.

The light, medium and heavy kick variants of this all do something different, but all must be charged. Rather than charged as a charge move, performing the move once will make Juri do her fireball-absorbing kick – and that charges that strength’s version. Performing the same strength again will then perform the full, powered up version of the move.

So: A Quarter Circle Forward and Light Kick will result in the close-range, fireball-nulling kick. A second afterwards (and there’s no time limit) will make Juri send out a low-hitting fireball of her own. You can see which you have stored next to your V-Trigger meter, but so can your opponent! Here’s the variants:

What was known as her ‘pinwheel’ in Street Fighter 4 is functionally gone but lives on in this, a new uppercut for Juri. The button pressed determines how far diagonally in the air and up this spinning kick travels and how many hits it does. The light kick version has the most utility outside of reaction uppercuts, since it’s fast enough to have some combo utility. There’s an EX version which performs like a powered-up version of the heavy kick version.

Juri hops up into the air and does a mid-air spin, bringing her leg down on the opponent. The button used determines how far this move travels – light the shortest distance, heavy almost full-screen. The medium and heavy versions can be used to punish projectiles if you’re careful and react quickly, as the hop in the air is enough to dodge a fireball.

Juri jumps up, flips around and slams her leg down which in turn causes a wave of projectile energy to travel most of the way across the screen but not quite full-screen.

If you do this super close up the kick part will actually connect and it’ll do more damage, though this can safely be done from 2/3rd screen distance and comfortably hit with the projectile. The closer the projectile lands after coming out, the more damage it’ll deal. You’ll want to be in your opponent’s face before popping this.

Juri has an air throw, meaning if you meet an opponent in the air you can grab them and throw them to the ground like any other throw.