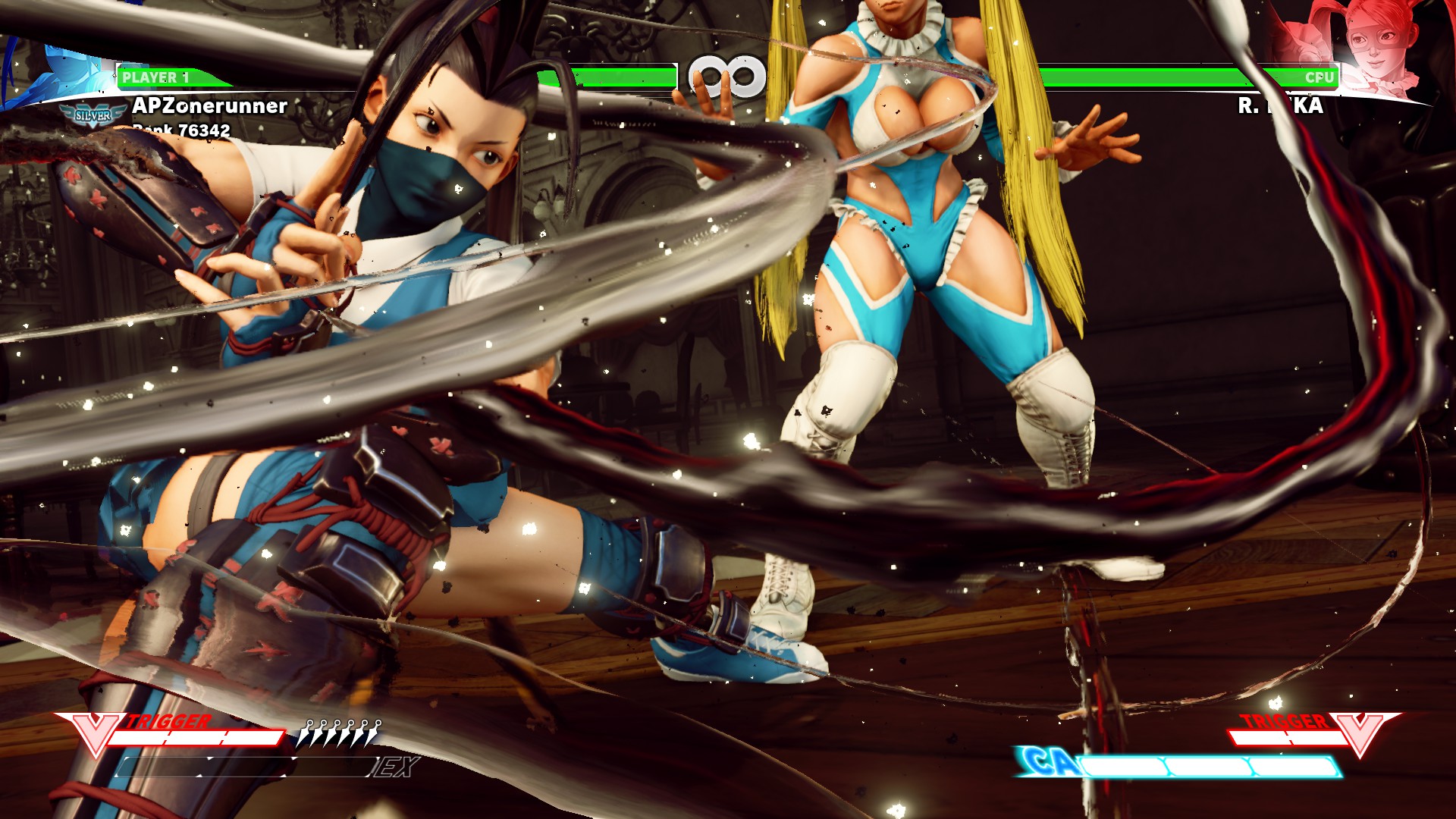 Balrog (M. Bison in Japan – they switched the names for legal reasons) or ‘Boxer’, as the SF community refer to him, is a hulking, deadly boxer who was expelled from the professional boxing circuit for being too violent. At that point he joined M. Bison’s organization.

His fighting style matches that of a professional boxer and of aggressive violence – heavy punches, deadly combos, and a very high damage potential. He’s a character that requires more patience in Street Fighter 5 than previous entries, but once you open the opponent up you can do serious damage.

Ibuki lets loose a small projectile immediately in front of her. Holding down the MP/MK buttons instead of simply pressing them allows the move to be charged a little, and when charged it’ll reach further and actually become Ibuki’s furthest-reaching move, and can thus be used for surprise. This move is ideal for taking out incoming projectiles, too.

Rokushaku Horokudama, or as we’ll now call it – the Bomb Throw – is Ibuki’s deadly V-Trigger. She tosses a bomb out to her opponent. Be careful, though – they can hit the bomb and deflect it back your way. Once the bomb explodes, if there’s still time left on the V-Trigger gauge you can toss another with another press of both Heavy buttons. The bomb can be used to force blocks, cross up, or complicate elaborate combo setups.

What direction you hold when you toss out the bomb will directly impact its fuse:

Ibuki fires her projectile – but rather than a fireball or the like, it’s a little Kunai. Ibuki’s Kunai are deadly when used right, but there’s a tricky little catch – she can only stock six at any given time. She begins the round with six, but if you use them all you’ll have to manually reload with the ‘Kunai Hoju’ special move. You can see the number of Kunai currently stocked above your EX Meter.

Ibuki throws kunai at a diagonal angle, though the exact angle and thus the distance it travels on the screen is determined by the button used – the harder the punch button, the further it flies. Be careful – kunai can be knocked out of the air by a well-timed attack from the enemy, too.

The EX kunai will explode on impact with your opponent or the ground, and can be used in conjunction with Ibuki’s V-Trigger to set off the bomb prematurely. The buttons used to activate the EX Kunai will impact its screen impact position (IE Light + Medium, Medium + Heavy, Light + Heavy).

This move can also be performed in the air with the same command, and has the same basic principle airborne as on the ground.

Kunai Hoju (Half Circle Back + Kick)

This move doesn’t do anything to the enemy and leaves Ibuki vulnerable, so be careful. Performing it reloads her stock of Kunai.

This move is a dash forwards with the grace you’d expect from a ninja, but the three different versions of it perform quite differently – almost like three moves in one. Notably, there is no EX version of this move at all.

Raida (Half Circle Back + Punch)

This is a fairly typical command grab, with Ibuki grabbing her opponent so long as they’re close enough and performing a move on them that results in a knockdown. This move can be used to end combos or just to gain the upper hand for a combo setup when an opponent rises from the ground. The EX version is notable as Ibuki dashes around half a screen length at its opening before initiating the grab, meaning it can potentially be done on reaction from range.

Ibuki’s uppercut, and a strong move with great combo potential. The button used determines speed, height and distance. The EX version can be comboed into an airborne Kunai for a little bit of extra damage.

This special move is a risky strategy – it makes Ibuki throw her entire stock of Kunai, however many that is. At that point you’ll be trapped without any more unless you find the time and space to reload, so be careful. It’s activated by pressing and holding any punch button on the ground. When you release, Ibuki will let rip with her Kunai. In the air, this move is performed identically but with the kick button.

Ibuki slides around a half-screen’s length across the ground with a low kick. So long as the low kick lands, even at the very end of its slide, Ibuki will flip the opponent up into the air and toss them back to the floor painfully. There’s solid damage on this move, but it also has decent potential to be linked into or done on reaction to a whiffed move.