Even toy manufacturers are trying to get in on that Fallout 4 hype. Toy maker Funko has added a new range of figurines to its Pop range that are all inspired by Fallout. These are seven in total and feature characters such as Brotherhood of Steel soldier, Vault Boy, Lone Wanderers (male & female), Super Mutant, Feral Ghoul, and Deathclaw.

They’re not too different from the ones Bethesda handed out to those attending its E3 conference.

They can be users for $10.99 each according to Amazon, or $12 according to Bethesda’s store. The launch dates are also reported differently. Amazon is listing them for an August release, while the Bethesda says July.

Take a look at all of them below: 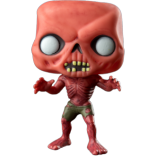