Along with the new tanks and maps are an adjusted Platoon system and the XP multipliers of Premium vehicles have been raised on every tier.

Several gameplay fixes and new visual effects have also been added. You can have a look at the patch notes through the official website. 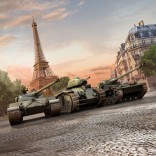