It's called the Aurora: a lumbering mass of rusted metal, quick fixes and alterations, spewing out steam and chugging its way across a post-apocalyptic Russia. It is the thing connecting the patchwork regions of Metro Exodus, the site of its most tender moments, and product of the world and people inhabiting it. It is a train, and it is the best character.

I do not love Metro Exodus as a game as much as I love its train. Playing as seasoned Ranger Artyom, you explore irradiated wastelands, from wide open deserts to dank underground corridors - all wonderfully-crafted and getting across the grittiness of survival. The train connects it all together. The train makes it feel like a journey.

While I relish the environments and their details, unfortunately the character writing holds the story back. I’m not sure if it’s a problem with translation, but the words spilling out of characters are plentiful and often pointless - the exposition dumps are painfully transparent and cripplingly slow. At one point I observed an enemy from afar, dying on the ground, totally alone. Despite their isolation, this enemy very kindly described exactly how they were wounded, how the cave they were in had explosive materials, and wasn’t it frustrating that the character I was currently seeking was just up ahead? Even the dying are dedicated to overwrought exposition in the world of Metro. 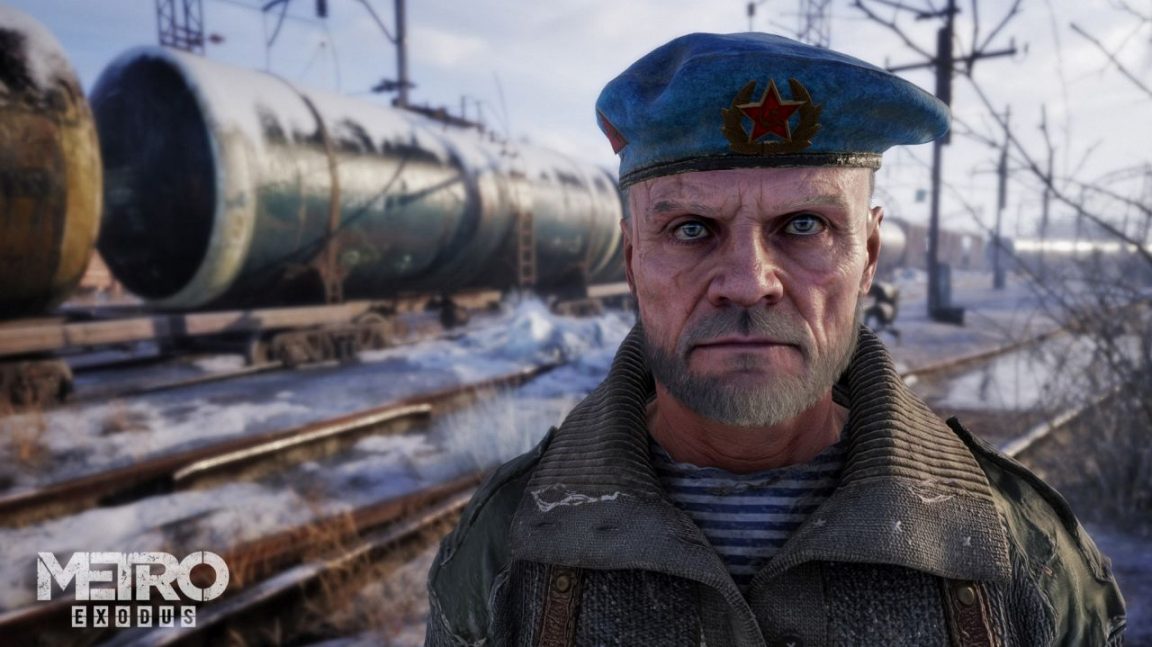 People love to talk in Metro Exodus - at you, over each other, to no one in particular. They love to talk so much that they keep going when you tire of it and walk away - even a disappearing audience cannot dampen their spirit for chatter as they break through your comms system.

The crew of action movie cut-outs that join you on your journey are the main culprits. But their endless talking seems particularly unnecessary when the train they are travelling on tells you more about the world than they do. It’s old, stained, and missing rivets. It emphasises that everything is repurposed and not performing optimally. Every space is utilised; clothes hang from the ceiling, shelves brim with scrap and tools, treasured items that could be mistaken for junk are lying on bunks.

The details show the sentimentality of the crew - it is not a harsh utilitarian space. Postcards, clippings from magazines and children’s drawings adorn the walls. A small, tarnished tricycle tucked in the corner of a private quarter says infinitely more about the characters, their relationships and the life they wish to provide than five minutes of incessant chatter.

The world of Metro Exodus is unceasingly hostile. If it isn’t terrifying mutants hunting you in packs or swooping from above, the humans left above ground may try and eat you, shoot you, or feed you to a giant fish. Just in case the residents of post-apocalyptic Russia don’t finish you off then the radiation and toxic air will probably do the job. The train makes you feel sheltered not just because it is a big metal shell, but the personal touches found inside also show that the continuation of some semblance of normal, recognisable life can continue in a world that seems to warp and twist everything from animal DNA to society.

The train is also a believable space. It feels lived in, used, and treasured. It may seem inconsequential, but it makes sense as a place; caged rabbits, a cleaning cupboard used as meat storage, water purifiers and a cooking station show us how food and drink are provided. The carriage containing the living quarters don’t just give Artyom a place to sleep, but every crew member’s space is accounted for. We may only get to see the action-packed moments of the Artyom’s journey, but the mundanity and reality of living on a train gives the journey a sense of time passing. 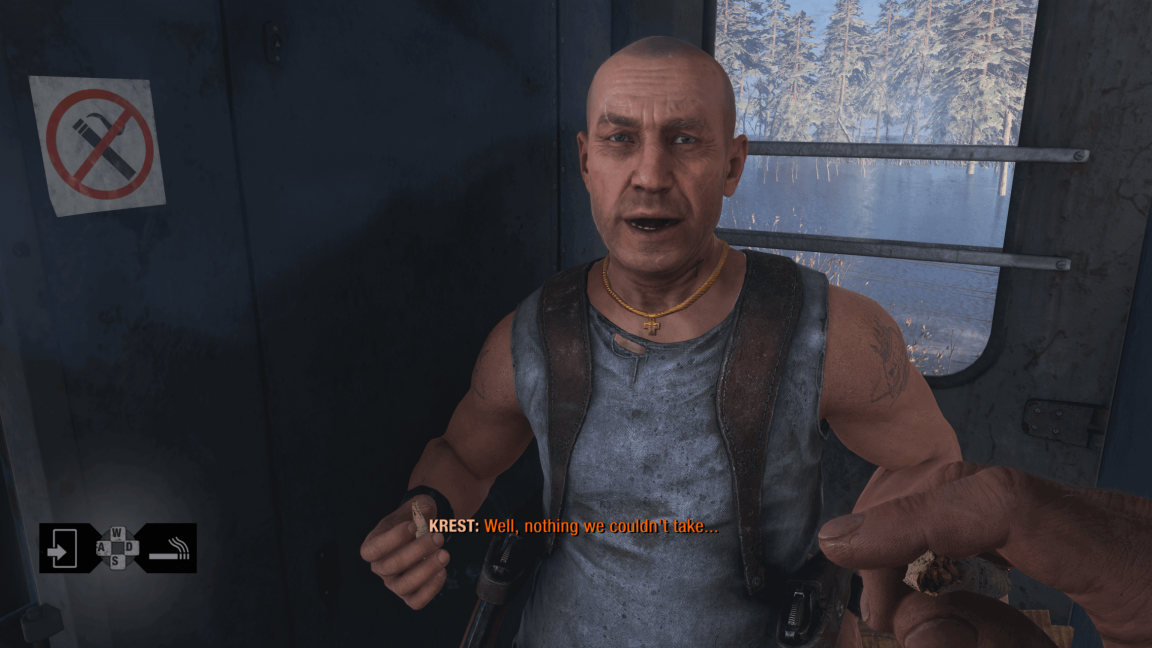 In contrast to this, the characters themselves are not as convincing. But when they’re ignoring you, just existing in the space, they feel most real. Quiet vignettes of the crew and train work in beautiful harmony and make for a moment's peace and contemplation as they drink, fiddle with equipment, play a guitar and watch barren forests race past the window. But too often the characters ruin those moments with the constant talking. Sneaking away to have a cigarette in a quiet corner is a necessary moment of decompression, but it is then spoiled by the endless chatter of the person that joins you. I just wanted some time to appreciate the bleakness flying past me. If only 4A Games had the confidence to let the world speak for itself.

I appreciate what the train represents. Metro Exodus never has you saving the world, it’s just about moving forward, trying to find a place to exist. A train is not the most subtle symbol, it is a ramshackle temporary home literally moving forward, but its presence as both necessary lifeline and sentimental prize feels more real and impactful than lengthy monologues.

Even by the end of the game I struggled to remember the names of any of my crew, but I felt like I knew my train. The train’s physical change; additions of new spaces, and adjustments as a consequence of habitation, really put to shame the static and one-note characters. It epitomised how I felt about the game - its writing just could not keep up with its environment design. The poor writing made me appreciate how much information the world gave me as I experienced it at my own pace. If characters give context, purpose, and sense of place, the train is far more successful in doing this than any of the human characters.

I love my big metal friend.