The Last of Us stands as the culmination of the developer Naughty Dog’s journey from the creator of Sony’s erstwhile bandicoot mascot to a master of interactive story-telling. You really should play it.

The Last of Us

The Last of Us is developed by Naughty Dog, the developer responsible for Crash Bandicoot, Jak and Daxter and Uncharted. It is set for release worldwide on Friday June 14 and is exclusive to PS3.

The musical score for The Last of Us is composed by Gustavo Alfredo Santaolalla, who won two film Oscars for his work on Brokeback Mountain and Babel.

A piece of concept art from The Last of Us has been included in the tenth annual Into the Pixel exhibition. It’s one of over two hundred pieces that can be unlocked upon completion of the game.

The Last of Us features a multiplayer mode called Factions, details of which can be found here, with a video trailer here.

Towards the end of The Last of Us there’s a short, seemingly incidental conversation that takes place between Joel and Ellie as they walk a ruined highway into a dilapidated city.

Pragmatic survivalist Joel is in a rare wistful mood and, buoyed by a fresh spring breeze, he briefly reminisces about a time back before the outbreak.

Ellie is only half-listening. Born post-outbreak, Joel’s old-world is alien to her and she’s ruminating on more recent, still-raw, memories of a harrowing winter.

It’s a quiet moment and one that’s easy to overlook because, like Ellie, you too are preoccupied with the events of that harsh winter and are replaying in your own mind recent interactions and confrontations.

Still, the onset of spring along with Joel’s uncharacteristic whimsy and Ellie’s unusual disquiet marks an important milestone in the pair’s relationship; one that serves to highlight where the two of them have come from and what they’ve had to endure to get to where they are.

You’re given time to reflect on this as you guide Joel through the wreckage of long-abandoned cars, following a routine that has become second-nature.

You scavenge for useful components that can be combined to create tools, weapons, healing aids and makeshift bombs; you find more examples of the damning and desperate actions of the city’s long-dead inhabitants.

While this moment marks a turning point for Joel and Ellie, there are many more momentous events and poignant exchanges than this to be found throughout Naughty Dog’s PS3 swansong. Neil Druckmann’s script, the performances and voice work of the actors, the vision of Naughty Dog’s designers and artists, and Gustavo Santaolalla’s evocative score all come together on numerous occasions to mark The Last of Us as a stunning example of interactive storytelling. 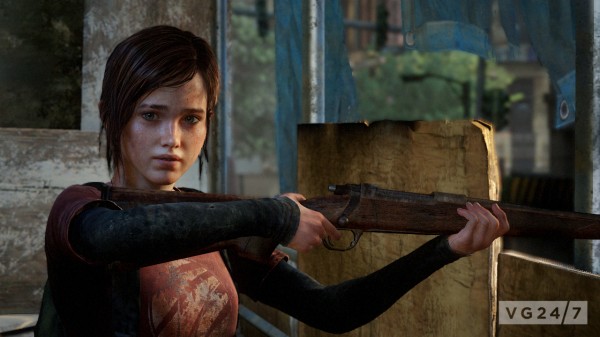 More important than any of these because of the nature of the medium is the way in which your own actions contribute to the experience and lend meaningful continuity to the story and setting. It has long been a staple of the medium to collect things: essential things, useful things, and just plain shiny things.

Here the gathering of items, equipment and trinkets fits perfectly within the context of scavenging and survival. Friendly NPCs even subtly acquiesce to your kleptomania, thus ensuring that your inevitable raid on their supplies is tacitly acknowledged and does not to jar with the narrative.

Throughout, Naughty Dog ensures that your constant desire to search the darkened rooms of abandoned buildings for supplies and trinkets is balanced with the role that such spoils play. Some enhance the story, enrich the relationship between Joel and Ellie or contribute materials for use in the streamlined crafting system, while still others add a handful of scrap that can be used to modify firearms or grant Joel basic ability upgrades.

Sometimes these items will be collected from quiet areas that are designed to let you explore spaces that were once heavily populated or structures that served functional, everyday purposes, such as bars and office blocks.

At other times, there’s an elegant risk and reward system at play, as you traverse areas crawling with infected or hostile human survivors and have to balance taking down lone sentries or wandering stragglers with the potential pay-off of scoring more supplies or uncovering additional secrets. 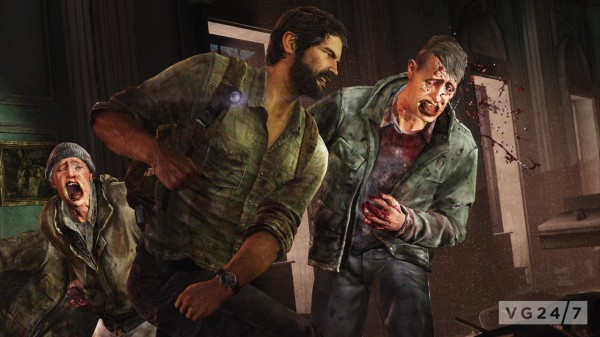 Often, something will go wrong and you’ll be spotted by someone or something. Sometimes you’ll move too noisily and attract the attention of the blind but fearsome clickers. In yet other areas you’re being actively hunted. Whatever the reason, sometimes you have no choice but to fight your way out. It’s at these times that you’re likely to expend your supply of makeshift explosives and ammo as you’re forced into tense fights in which the AI will attempt to flank you and catch you unaware.

It’s here that the ability to craft items on the fly using the clean UI comes into its own as you constantly move from one location to another, scavenging for that last component in order to create a healing aid or offensive tool to give you the edge. It’s at these times that you’re thankful for Joel’s substantial arsenal, but the sheer number of weapons at your disposal is otherwise conspicuous within the context of a survival experience.

By the end of The Last of Us you’ll have amassed an abundance of firepower to which you’ll have added dozens of upgrades. Its elements such as this, when Naughty Dog is making concessions to standard video game tropes, that The Last of Us is at its weakest. A constant trickle of new weapons that add to, rather than replace, older ones certainly offers an open approach to combat but it also undermines the otherwise excellent sense of authenticity.

Similarly, Joel’s ability to 'listen' grants the tired super-power of being able to see through walls and while its use is entirely optional – and is in fact denied to you on the hardest difficulty level – it feels like an eleventh-hour addition for the sake of accessibility. 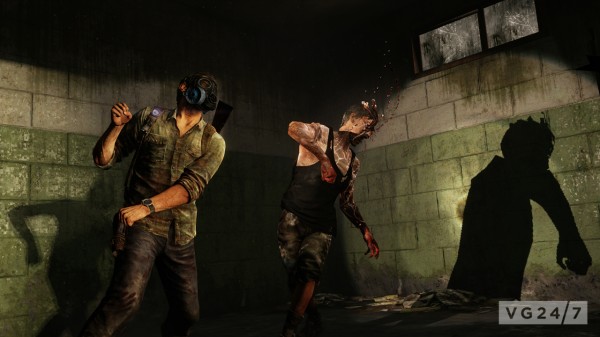 Elsewhere, the otherwise excellent companion-AI that governs Ellie and other NPCs occasionally gets caught out and shatters the carefully constructed illusion. The worst example of this is that nothing happens when a friendly NPC is caught in two minds of where to hide and bumps up against adversaries while you’re stealthily moving through an area.

In a bid to avoid frustrating fail states, Naughty Dog has programmed the enemy-AI to respond in the first instance to your actions, and so it will only acknowledge the existence of your companions if it has spotted you first. It’s a rare occurrence but one that’s impossible to excuse or ignore if and when you witness it first-hand.

The Last of Us keeps things fresh throughout by providing numerous varied environments to explore and a changing of the seasons that mark the passage of time; the pacing of the narrative ensures that you always feel like you’re moving toward something and not simply being shifted to a new area in order to collect another set of goodies. Despite just a handful of enemy archetypes, combat never feels stale thanks to the variety of scenarios into which Joel and Ellie are thrust.

All of this pales against the achievements of the excellent script, nuanced performances, beautiful score and the overall level of continuity and rich context that the setting provides for your own actions. While individual elements of The Last of Us can be picked at, as an overall experience it is memorable and, in some respects, peerless.

Thank goodness, then, for the long console cycle that has provided Naughty Dog the time and opportunity to create The Last of Us. It serves as a fitting and worthy culmination of the developer’s work on the current generation of hardware and an exciting and emotional precursor of what it can achieve on the next.

The Last of Us arrives on PlayStation 3 on June 14.