Sony has sold 76 million PlayStation 4 consoles since launch, shifting 19 million in the past 12 months.

That compares to 20 million units in the previous fiscal year. For the 2019 financial year it expects to sell 16 million PS4s. That's no small beans, but clearly hardware sales have passed a peak.

Games sales and subscriptions to PlayStation Plus continue to bring in the greens though, with the PlayStation business reaping profits of 177.5 billion yen. That's expect to grow to 190 billion for the next financial year. 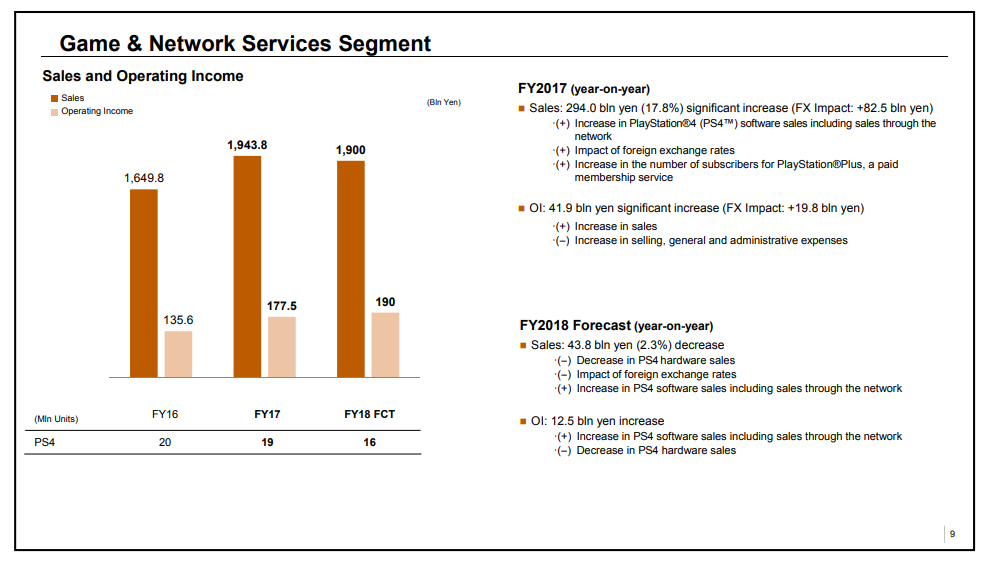 "Sales increased 294.0 billion yen (18%) year-on-year (a 13% increase on a constant currency basis) to 1,943.8 billion yen. This increase was primarily due to an increase in PlayStation 4 software sales, including sales through the network, the impact of foreign exchange rates, as well as an increase in the number of subscribers for PlayStation Plus, a paid membership service," Sony told investors today.

"Operating income increased 41.9 billion yen year-on-year to 177.5 billion yen. This increase was primarily due to the above-mentioned increase in sales, partially offset by an increase in selling, general and administrative expenses. During the current fiscal year, there was a 19.8 billion yen positive impact from foreign exchange rate fluctuations."

For the next 12 months Sony said it expects hardware sales to fall but game sales to counter-balance those numbers as they rise.