There's a massive new DLC-sized mod coming to Skyrim this year that that takes you back through the jaws of Oblivion and into purgatory in the Dreamsleeve.

After a successful Patreon campaign, Sinitar Gaming's latest project, Apotheosis, is nearing completion. Apotheosis is a DLC-sized mod that takes place throughout the 16 realms of Oblivion, Dreamsleeve and the Battlespire, which are all mentioned in The Elder Scrolls extensive lore.

There's one caveat, however: Only PC players will be able to play Apotheosis when it's released, but there's scope for it to come to consoles post-launch. 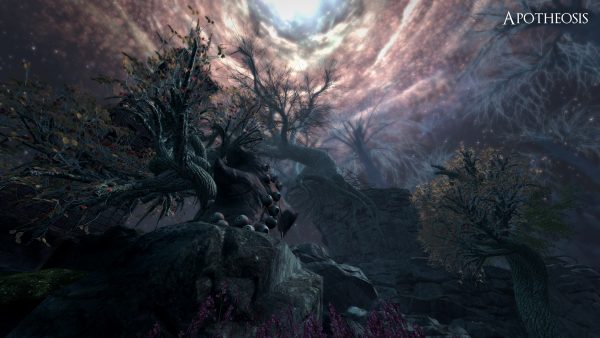 There will be new bosses to face, each with their own "challenging mechanics", as well as a bunch of new weapons, spells and gear to find. The main quest focuses on assembling the Heart of Lorkhan, but you're free to explore the realms of Oblivion and complete quests in any order you like.

You awaken in the Dreamsleeve, home of the forgotten dead, which acts as a hub, similar to the Hunter's Dream in Bloodborne. There are other lost souls hanging around here and you'll be able to interact with them - you never know who could potentially become a formidable ally later in the story. You can also trade with these souls and complete missions for them inbetween fighting Daedra and exploring the spikey, scary lands beyond the Oblivion Gates.

You can check out the trailer below that shows off some cool gothic architecture and what looks to be some Oblivion-themed dragons, which are obviously central to Skyrim's main plot. You'll also be able to find rare and powerful artifacts, much like the Daedric items found throughout The Elder Scrolls saga.

While there's still some testing to be done, it won't be long before you'll be able to enjoy this fully voice-acted gothic adventure and finally surpass the 500-hour mark in Skyrim. If you're looking for more Skyrim mods, you can check out the Sekiro combat mod here, as well as the best Skyrim mods for PS4 and Xbox One.