It’s fair to say that the vast majority of Overwatch players, at some point or another, have encountered multiple drafts where no one wants to Tank or Support.

Certainly in my own experience, I would hazard a guess that 80% of every single match I play, I’m forced to play Tank or Support roles, simply because the majority of my team immediately leap for the likes of Genji, Hanzo and Junkrat. I’ve no problem with players navigating towards their favorite Hero, or playing a role they’re undoubtedly best at, there’s no mistaking that unbalanced drafts, and players who refuse to playing other than "their main" can be a frustrating experience.

While data suggests pick rates are spread more towards Tank and Support roles than Assault and Defence, that’s not entirely surprising considering the majority of the Defence roles (Bastion, Torbjorn, Mei, and Hanzo) are undoubtedly niche and some Offense Heroes are out of meta (specifically Doomfist and Sombra - until her update lands). Even so, that doesn’t stop almost every match I play descending into an episode of "how many DPS can we fit on one team?".

What I find so odd about this clambering to play DPS roles, is that while many of the Offense and Defense Heroes certainly offer high numbers when it comes to raw damage output, Tank roles in Overwatch are more than capable of securing high amounts of kills. I suspect a large part of this roulette wheel as to whether or not you’ll get a balanced composition, is the fact that Tank and Support roles have an image problem. Not only that, but some players simply don’t want the responsibility of looking after others. 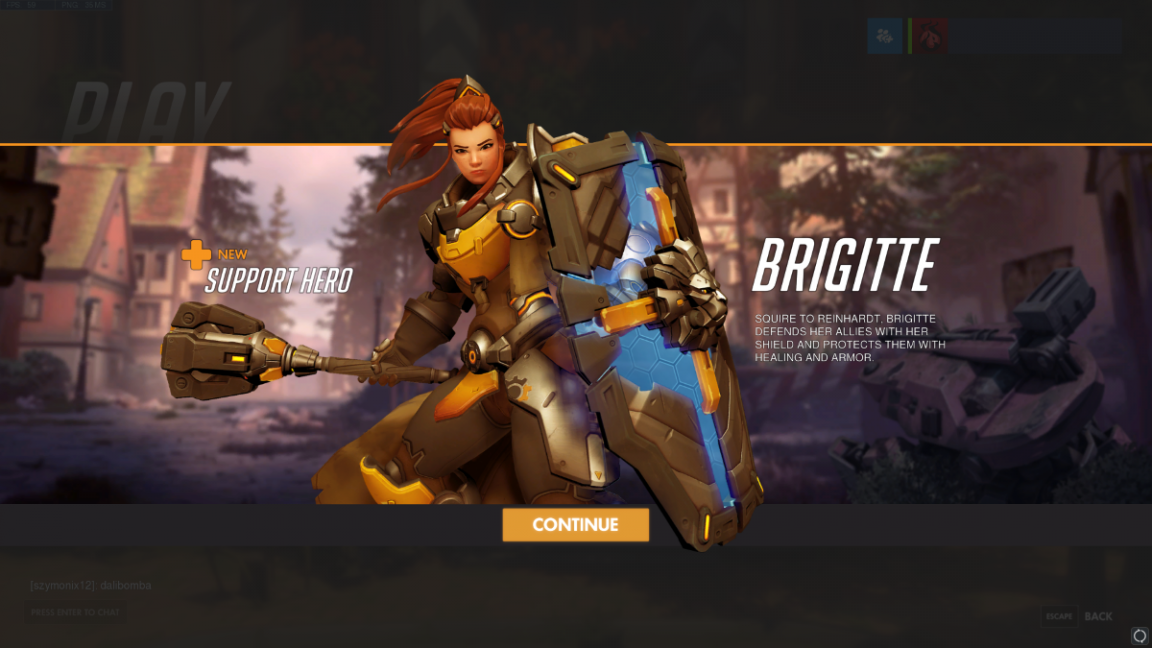 The arrival of Moira, and now 27th hero Brigitte, suggests to me that Blizzard are attempting to address these problems. With both Heroes straddling two roles (Moira being a support/damage hybrid, and Brigitte is a support/tank hybrid) the lines of Hero roles begin to blur. I wouldn’t want to suggest either of these Heroes can eclipse their purer peers, but there’s no doubting that they’ve broadened the depth and potential of team compositions.

Having played Brigitte since her arrival on the Public Test Realm, there’s no mistaking that she’s vastly different to other Support roles. Simply put, she’s an aggressive Hero that leans heavily towards the Warrior Priest archetype. The lengthy cooldown on her Repair Pack, combined with her Passive healing through Inspire - triggered by smashing enemies around the head with her flail - sees her having to take to the frontline with total abandon. The fact her kit also offers a generous barrier (600hp), and a high impact six meter stun ensures she has little to fear when it comes to shutting down Heroes who needle from the flanks: a trait no other Support can claim.

What’s so interesting about Brigitte’s arrival, especially on the back of Moira, is that both Heroes help alleviate some of the draft stressors that are so common in Overwatch. They allow for a layering of roles that plug existing gaps, while inviting selection from people who might not always be comfortable in a certain role. 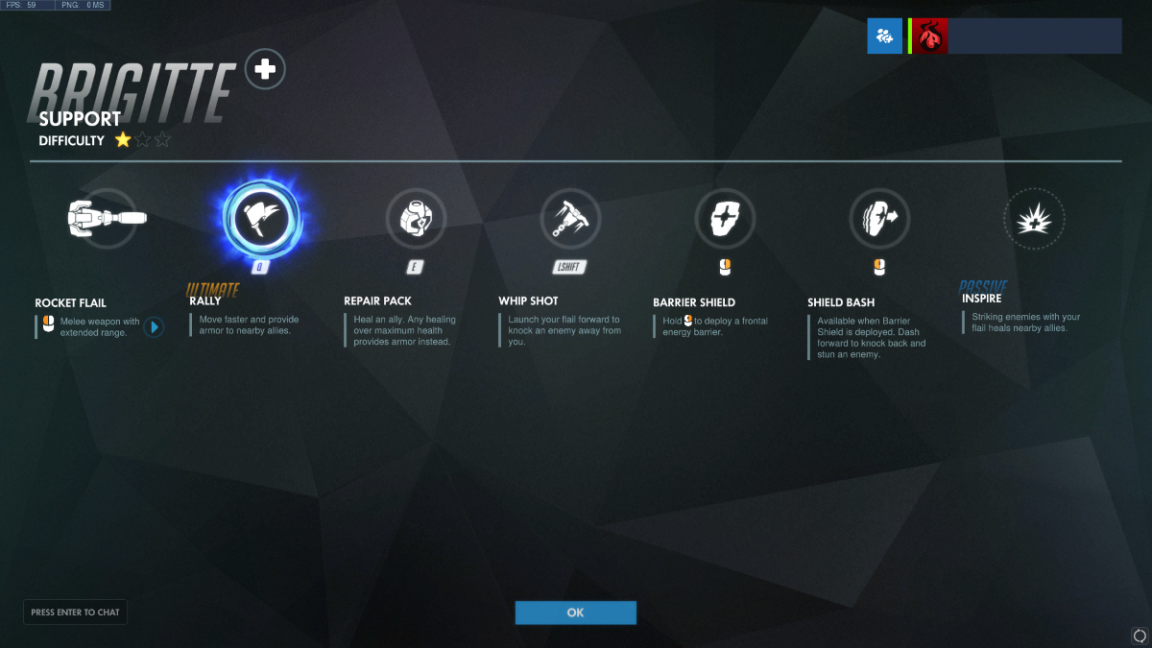 Since Overwatch launched I’ve played only Support and Tank roles. Having to now fight for selection of Moira - and no doubt for Brigitte when she goes live - is a refreshing change. In fact, I can’t ever remember a time where I had to rush to choose a Support role. Although Heroes such as Zenyatta, Lucio and Ana can deal reasonable damage, none of the existing roster before Moira’s arrival offered a true hybrid playstyle. Healing was primary, damage absolutely secondary. In contrast, both Brigitte and Moira tread a fine line between the need to deal damage, and protect their team. Each is undoubtedly challenging to play, and yet invite Offense focused players to give them a shot.

Chatting to random players on the PTR, the consensus from those who’ve played Brigitte is that they love she can deal high burst damage, while offering a tanky, supportive playstyle. My favorite quote, amongst many, being; "I just love smashing shit in the face." A ringing endorsement if ever I’ve heard one.

If Blizzard are to continue in this vein, of delivering Heroes who straddle multiple "soft" roles, it can only be to the benefit of Overwatch. Not only will it offer greater strategic depth, but it also increases draft diversity (when Brigitte’s combined with Reinhardt and Roadhog, her push potential proves incredibly powerful). Encouraging players to move away from their comfort picks, while ensuring they’re happy to Tank or Support, is a mountain Blizzard could conquer through Hero hybridisation. 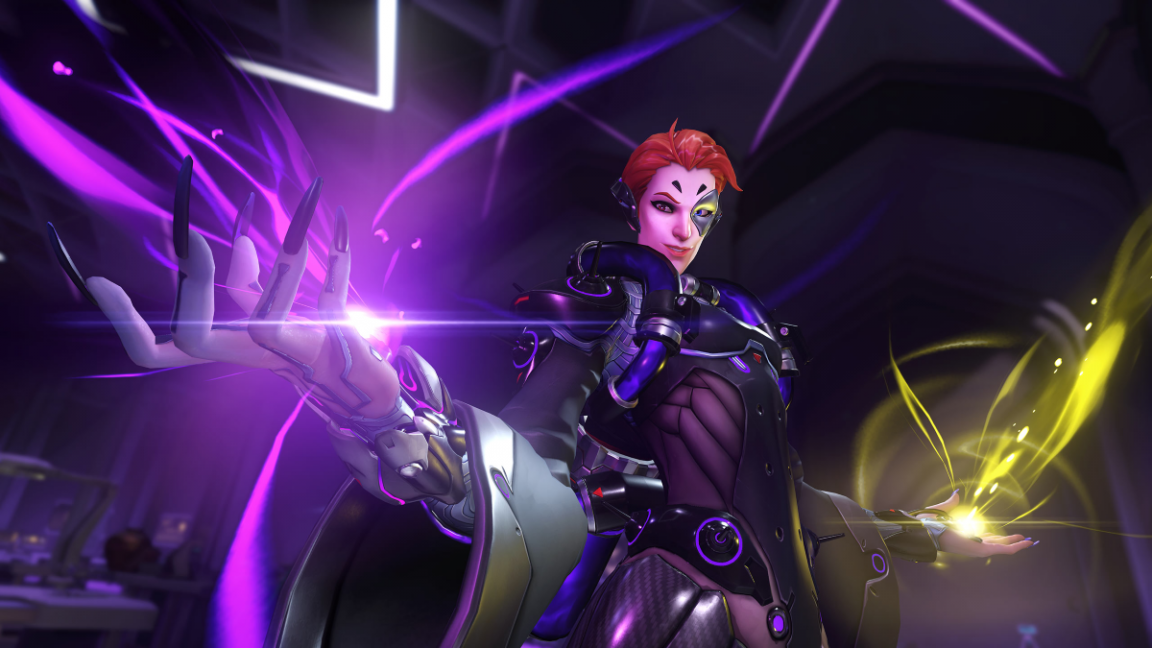 Going forwards, I’d love for this style to bleed into the Offense and Defense roles, by granting them utility skills commonly associated with Tanks or Supports (AOE movement speed would be first on my list). Although Solider: 76 and Torbjorn technically provide hybrid support through AOE healing and armor provisions, neither quite stack up to the refined design of Moira or Brigitte. Perhaps it’s my bias, certainly as someone who has loved hybrid classes in most games I’ve played, but it’s hard to deny how much value hybrid Heroes bring. They might prove difficult to balance, and there’s always the argument they offer less than dedicated roles, but they remain a welcome addition, even if some players get carried away and forget their primary role.

Like many, I can’t wait for Brigitte’s release and hope that her addition, alongside Moira’s, paves the way for a new chapter in how Blizzard go about designing their Heroes. Here’s hoping for more hybrids.

Have you played Brigitte? What’s your thoughts on her kit and playstyle? Do you like the fact she feels like she fulfills multiple roles? Are you a purist and would rather see defined roles and less hybridisation? Let us know.